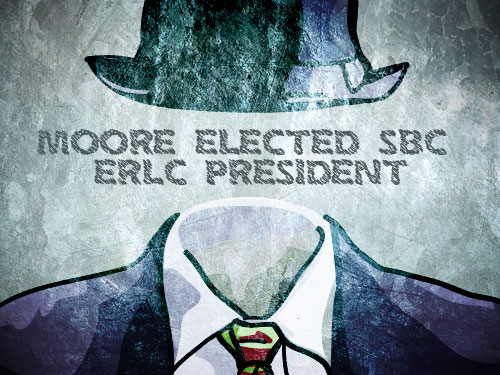 Listen to the BaptistMessenger.com Exclusive Podcast with Russell Moore >>

NASHVILLE, Tenn.—Russell D. Moore has been elected as the new president of the Southern Baptist Convention’s (SBC) Ethics & Religious Liberty Commission (ERLC) by the entity’s board of trustees.

Moore will follow Richard Land as the eighth president of the ERLC, which is the Southern Baptist agency dedicated to addressing social and moral concerns and their implications on public policy issues. Moore will begin his new responsibilities June 1. At that time, Land will become the entity’s president emeritus, an honor bestowed on him by trustees in September. Land announced his impending retirement last July.

Moore, a native of Biloxi, Miss., has served since 2004 as Dean of the School of Theology and Senior Vice President for Academic Administration at the Southern Seminary in Louisville, Ky., where he is also Professor of Christian Theology and Ethics.

Moore is a widely recognized preacher, writer and commentator on matters related to faith, culture and politics. He is the author of books such as Adopted for Life: The Priority of Adoption for Christian Families and Churches and Tempted and Tried: Temptation and the Triumph of Christ.

“I am honored and humbled to be asked to serve Southern Baptists as ERLC president,” Moore said. “I pray for God’s grace to lead the ERLC to be a catalyst to connect the agenda of the Kingdom of Christ to the cultures of local congregations for the sake of the mission of the Gospel in the world.”

“Dr. Moore has proven himself as an articulate spokesman in regard to moral and ethical issues, both among Southern Baptists and the secular media,” said Anthony L. Jordan, executive director-treasurer of the Baptist General Convention of Oklahoma. “He is a gifted speaker and preacher of the Word of God. He will represent all of us very well in the halls of Congress, with the President and other elected officials,  where a clear trumpet call and strong voice of biblical morality needs to heard. I am very pleased he has been elected to lead the ERLC.”

Land also lauded Moore’s election, “I am delighted that the Holy Spirit has led the ERLC’s trustees to Russell Moore as the commission’s next president. Moore is a godly Christian minister, a devoted husband and father and a convictional, committed Baptist. His excellent academic preparation, combined with his keen mind and his tender heart for God and His people, make him a person uniquely suited to serve our Savior and Southern Baptists in this crucial role at such a critical moment in our nation’s history.

“I join the trustees and ERLC staff in committing to pray for Russell and his dear family as he prepares to assume the tremendous responsibilities of the ERLC presidency.”

The presidential search committee, led by Barry Creamer, vice president of Academic Affairs and Professor of Humanities at Criswell College, recommended Moore to the trustee board after a seven-month search process.

“After praying, planning, meeting and working for months to find the man we believe God would have lead the ERLC, we are blessed by the board’s election of Russell Moore, and confident that God will use his message to impact churches and the public marketplace of ideas for what is right, true and desperately needed today,” Creamer said following Moore’s election.

A widely-sought cultural commentator, Moore speaks frequently to issues of ethics, evangelical engagement and religious liberty, having been quoted or published by many of the nation’s leading news agencies and periodicals. He also writes frequently at his “Moore to the Point” website and hosts podcasts, including “The Cross and the Jukebox,” a program that examines country music from a gospel perspective.

Moore and his wife Maria are the parents of five sons.