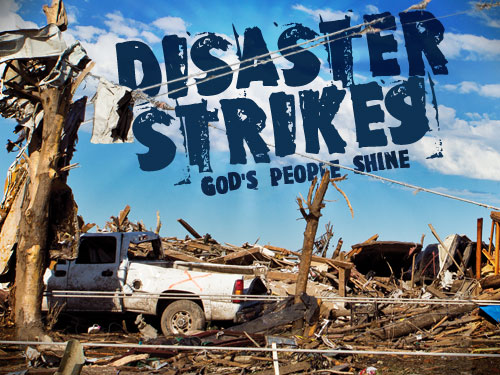 >> from wire and staff reports

MOORE—With Oklahoma Baptist Disaster Relief teams already responding May 20 to severe weather from Sun., May 19 in several locations, including Shawnee, Edmond and Little Axe, Oklahoma Baptists are assisting with recovery efforts from the devastating tornado that hit Moore.

”Within moments of hearing of the destruction in Moore, we put together a rapid response volunteer team to help with the clean-up and recovery efforts,” said Sam Porter, disaster relief director for the Baptist General Convention of Oklahoma (BGCO). “Our teams are on-the-ground now surveying the area and helping where we can be of most assistance.”

Since Sunday’s storms, hundreds of volunteers were deployed, including a mobile command center, a mobile kitchen and feeding units, chainsaw teams to help residents clear trees and debris, and more than 30 chaplains on-the-ground to help victims with emotional trauma.

”We will not leave the sites affected until every family is served,” said Anthony L. Jordan, BGCO executive director-treasurer.

Those interested in helping can make a tax-deductible donation to the BGCO’s disaster relief ministry by visiting www.bgco.org/donate or calling 405/942-3800. All monies go toward disaster relief and helping victims. For photos, information and updates, visit the Oklahoma Baptists’ blog at www.okdisasterhelp.com.

“We are not taking donations of any kind of items.  We are not set up to handle that,” Porter said.  “They should contact Salvation Army, Red Cross, Regional Food Bank, local churches or some other organization to give in-kind donations.”

The Oklahoma Baptist Homes for Children (OBHC) Children’s Home at 16301 S. Western in Oklahoma City sustained damage to two carports during the storm, and the campus was littered with debris. The campus is home to approximately 85 children and young mothers, none of whom were injured.

“One of our board members provided a generator for auxiliary power to the freezers to protect the perishable food items,” said OBHC President Tony Kennedy.  “Please continue to pray for the staff and residents on the campus as they clean-up debris and make the necessary repairs.”

Meanwhile the official death toll stood at 24 as the historic tornado moved through the Oklahoma City suburb of Moore the afternoon of May 20, prompting the North American Mission Board (NAMB) to direct all incoming disaster relief funds to the area.

NAMB, in charge of the national Southern Baptist Disaster Relief operation, used Twitter to signal an exclusive allotment of funds.

“We are currently directing all donations to our disaster fund to Oklahoma City relief. #prayforoklahoma,” NAMB tweeted with a link to a donation form.

Many of the victims were children, after the tornado severely damaged two elementary schools. The search for survivors continued May 21, and it was unclear how many could still be trapped in rubble, dead or alive.

“On behalf of the Southern Baptist Convention, our prayers and thoughts are with the families and victims of the tragic tornado in Moore,” Luter said in a statement May 21. “Not only our prayers, but disaster relief teams from across the SBC are there to assist in any way possible. May God give the citizens of Moore comfort, strength and hope during this trying time.”

More than 230 people were injured as the two-mile wide tornado stayed on the ground for 40 minutes, cutting a 17-mile path in a heavily populated area. An early estimate rated the tornado as an EF4, but that was elevated to EF5 later.

Frank Page, president of the SBC’s Executive Committee, told Baptist Press May 21 his prayers “go out to the dear people of Oklahoma during this tragic time.”

Page spoke with Jordan, and “assured him that Southern Baptists will stand by them.”

“Even when media focus moves to another story, we will not forget. Individual Southern Baptists as well as our many disaster relief teams will continue to minister for as long as it takes,” Page said.

Jordan circulated a letter the evening of May 20, saying he was “deeply devastated by the destruction and loss of life” caused by the Moore tornado as well as those that struck May 19 in nearby areas.

“I pray God gives us the strength to pull together, as His people, to turn this tragedy into a moment that gives Him glory,” Jordan wrote. “Our disaster relief teams are on the scene of every area affected in Oklahoma, and we will not leave the scenes until every family is served.”

Jordan asked Southern Baptists to pray for everyone affected by the disaster and to consider making a contribution to the Oklahoma Baptist Disaster Relief efforts.

“May we be the hands and feet of Christ during these crucial days,” Jordan said.

The BGCO disaster relief effort on May 22 included the preparation of 6,700 meals, 30 loads of laundry, distribution of 30 Bibles by chaplains and 105 volunteers on site, said Incident Commander Wes Johnson, from Chandler.

The May 20 twister traveled part of the same path of destruction as a tornado that hit Moore on May 3, 1999. That EF5 storm, with winds in excess of 300 miles per hour, was the first disaster response coordinated by Porter.

Disaster relief officials from the North American Mission Board were en route to Oklahoma from Georgia May 21 to help coordinate the Southern Baptist Disaster Relief response.

“Prayer is the biggest thing people can do now,” Fritz Wilson, NAMB’s executive director of disaster relief, said. “The total loss, the loss of a child or other family member, is one of the hardest things the survivors will have to deal with. The emotional toll is devastating.”

In support of Baptist General Convention of Oklahoma volunteers, NAMB dispatched a semi-truck with bottled water and rolls of roofing tarp from its headquarters Tuesday morning. A mobile command center was being prepped for departure May 22.

Oklahoma Baptist University in Shawnee was opening its residence center for those who have lost or sustained damage to their homes. Up to 350 beds were available through May 29 when rooms were needed for previously scheduled summer camps, the university said. Food there is being provided by Oklahoma Baptist Disaster Relief.

Flags at the U.S. Capitol were lowered to half-staff May 21 in honor of the victims in Oklahoma.

Rep. James Lankford, R.-Okla., a Southern Baptist, mentioned Moore, First on MSNBC May 21 as a relief center. Sen. Jim Inhofe, R.-Okla., tweeted that Southern Baptist relief efforts were operating out of Moore, First, and Oklahoma Gov. Mary Fallin retweeted a message from the BGCO regarding how to donate to the convention’s disaster relief fund.

R. Albert Mohler Jr., president of Southern Baptist Theological Seminary, was speaking on NPR May 21 on the topic of God, evil and suffering, and he tweeted that it was “very moving” to realize the conversation was scheduled weeks ago.

In a blog post, Mohler helped Christians think through how to respond to tragedy such as the Moore tornado.

“We weep with those who weep, and we reach out with acts of care and compassion. We pray for those who are grieving and have experienced such loss. We cry for the children lost in this storm, even as we are so thankful for brave people who did their best to save lives as the winds raged. And, we pray: Even so, Lord come quickly,” Mohler wrote at albertmohler.com.