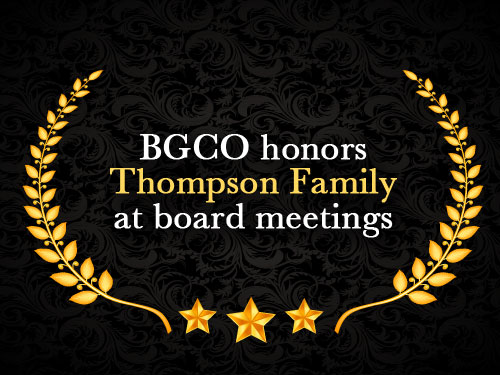 DAVIS—Falls Creek Conference Center was the site for the May 20-21 Board of Directors meeting for the Baptist General Convention of Oklahoma (BGCO). Board members discussed many proposals and heard many reports on state Baptist life, but they also spent time honoring a family who has made a major impact on Oklahoma Baptist ministry.

Anthony L. Jordan, BGCO executive director-treasurer, recognized the Thompson Family and their business, Wynn Construction, during the opening of the plenary session and offered them commemorating gifts which included a decorative framing of the verse Jer. 29:11.

“Wynn Construction built this building, and did a pretty fine job,” said Jordan before the board members gave roaring applause to Jordan’s acknowledgement of Falls Creek’s Tabernacle. “(The Thompsons) are people of integrity. Wynn Construction has always been there for us and has always stood in our stead. I just can’t tell you how blessed we have been.”

Nine members of the Thompson family, including patriarch Richard Thompson, stood with Jordan in front of the board while Jordan announced the whole family contributed in giving $3 million toward the building of a new 50-room lodge at Falls Creek.

“I want to emphasize to you it is the whole family,” said Jordan. “Every one of these folks standing up here has a part in contributing to the building of the Lodge. We call it the Thompson Family Lodge here at Falls Creek.”

Jordan said naming the Lodge after the Thompsons was a way to encourage others to respond in giving, which has already occurred and is expected to see more support in the future.

“That lodge will be a place where we will see hundreds of people come throughout the year, not just during the summer, but all year long,” said Jordan. “The same thing that happens in the youth weeks happens during men’s retreat. It happens in other events that will go on here. Because of (the Thompsons’) generosity, there will be people who will come and stay in those rooms. They will come to Christ. They are going to have their lives transformed and changed.”

Other highlights at the May board meetings include the announcement of Cris Lowery becoming the head of Baptist Collegiate Ministries (BCM) in Oklahoma, replacing his current title of Emerging Generations Specialist. Jordan said Oklahoma BCM leaders “will be used to help our local churches engaging the emerging generations moving forward.”

Jordan also announced the former CrossTimbers camp site near McAlester is listed and ready for sale. An estimated appraisal was $1.8 million.

Renovations to Falls Creek’s campus were discussed, including updates on the new water and sewage systems. Because of a recent $7 million gift, Falls Creek will have a new welcome center to be built across from Ada, First cabin, along with an approximate 42,000-square-foot event center and dining hall.

A missions report on the partnership in Guerrero, Mexico was given regarding online extension classes to be offered through the seminary to train church planters. The strategy to plant 15 churches in Acapulco by 2015 already has been met and surpassed with the announcement of 17 new churches starting in the past two years.

Regarding proposed recommendations, BGCO board members passed a bylaw recommendation giving the right to the BGCO president, the executive director-treasurer and senior associate director to have single power and authority to sign documents that would affect up to 1 percent of the budget. For documents that obligate the corporation to pay more than 1 percent of the budget, two officer signatures shall be required.

Board members also approved the addition in the BGCO Constitution which states, “Newly elected board members will begin their terms upon their election by the convention in annual session. Members elected during the year to fill unexpired terms will begin service upon the vote of the board of directors.”

Regarding a recommendation from the finance committee, the board approved a $775,000 expense for the exterior restoration and electronic entry of the Baptist Building, located at 3800 N. May in Oklahoma City.  The expense includes a thorough cleaning of the building’s exterior, resurfacing the building, sealing of exterior windows and updating the building’s security system.

Built in 1984, the Baptist Building has never experienced an exterior cleaning or resurfacing. The building is valued at approximately $15 million.