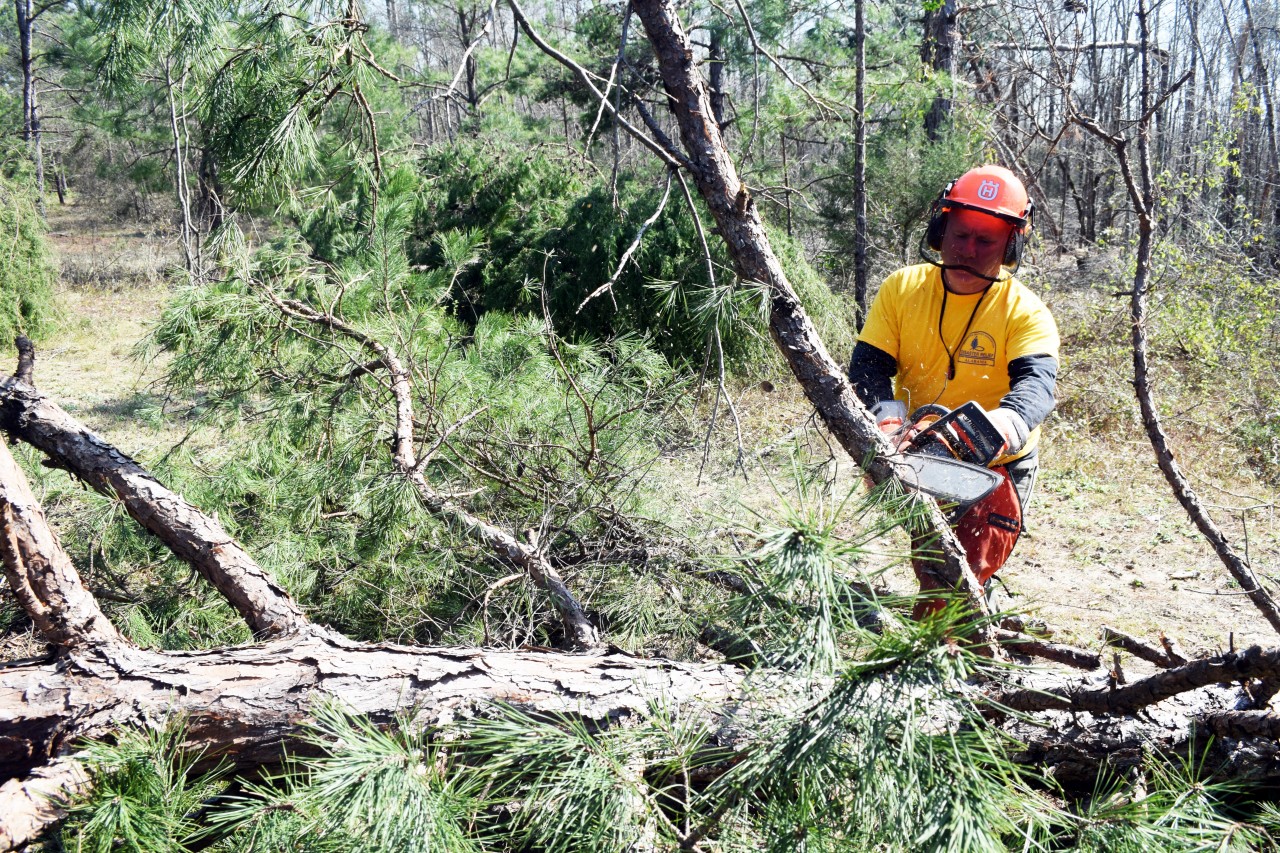 FORT GIBSON (BP)—It has been nearly 18 years since the darkest day of Lonnie Rowan’s life. On Dec. 31, 2001, Rowan fell into a brush fire on his Ft. Gibson property. With burns over 35 percent of his body, doctors gave him a 1 percent chance to live.

God’s odds were much better.

Although Rowan had one leg amputated below the knee and the other leg amputated above the knee, he beat all the other medical expectations. The doctors said he’d spend four months in the burn center. He spent two. They told him it would take him two and a half years to walk. He was walking in less than seven months and back at work in eight.

“The hospital in Tulsa tagged me as their ‘Miracle Man,’ Rowan said.

Today, Rowan is still defying the odds, now as a Southern Baptist Disaster Relief (DR) volunteer. A team leader—or blue hat—on a local chainsaw team, he has been involved in a number of deployments from his home state of Oklahoma to Texas, Florida and Louisiana.

“Lonnie is the kind of servant-leader every state director wants to have on their DR team!” said Don Williams, the SBDR director for Oklahoma Baptists. “Lonnie typifies Southern Baptists who put Christ’s call ahead of their personal comfort, to see God glorified and lives changed by the power of the Gospel.”

Rowan is just one of thousands of volunteers who have served with DR so far in 2019. Volunteers have given nearly 400,000 hours of service through the ministry. Those volunteers have shared the Gospel close to 4,000 times, which has led to 840 professions of faith. On Sunday, Nov. 10, SBC churches will honor the service of these volunteers as part of Southern Baptist Disaster Relief Appreciation Sunday.

To celebrate and share the organization’s ministry, DR National Director Sam Porter of the North American Mission Board (NAMB) suggests that local teams set up feeding units at churches to give congregations a firsthand look at what the ministry is like. During worship services, churches can also recognize volunteers while allowing volunteers to share their stories of ministry on the front lines.

“The key to this ministry is the volunteers themselves,” Porter said. “Lots of them have some great skills. Most of them just have a willing heart. They work hard, and they’re faithful.”

In its 51 years of existence, DR has become the third-largest disaster relief response team in the nation. DR is a network of state-based volunteer teams that deploy worldwide when disaster strikes. NAMB provides national coordination and assistance in larger, multi-state responses.

“I want to give a special word of thanks and appreciation to every volunteer, church, association and state Baptist convention that plays a part in Southern Baptist Disaster Relief,” NAMB president Kevin Ezell said. “What an incredible example of how our family joins together to meet needs and—most importantly—share Christ.”

Porter notes that the last two years have tested the faithfulness of DR volunteers because of the intensity of the needs from so many long-term disaster responses. DR leaders have called 2019 “the year of the flood” because teams have been involved in flood relief nonstop since February when massive floods hit Mississippi and Tennessee.

Oklahoma and Texas both had record numbers of tornadoes. Other states, notably Alabama, experienced severe tornadoes as well. Tropical Storm Imelda, one of the wettest tropical storms on record, hit southeast Texas in September, engaging an area that had been hit two years earlier by Hurricane Harvey.

“The last two years, back to back, have been agonizingly hard and long—massive disasters,” Porter said. “But these volunteers keep coming. That’s the greatest thing I can say. If God’s people feel a call to put themselves in the offering plate, we’ll send them.”

Porter said DR realizes the ministry is in a critical period of generational change, as Southern Baptist leaders seek to engage younger people in the work.

“I’d encourage more people to get involved—whether it’s one day or two days, whatever you can give,” Rowan said. “Through your work and effort, you can help people in need. You can let Christ show through you. We always say that we’re the hands and feet of Christ. Although mine are metal, I can still be the hands and feet of Christ because I can take God’s Word to them.”