Crazy week of weather. On Monday, my dog Olive is sunbathing on our noontime walk: 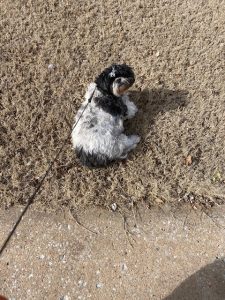 On Wednesday, Olive is watching the snow: 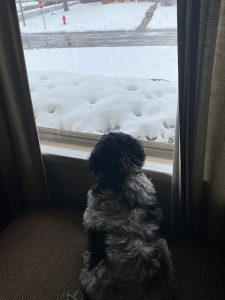 Thanks for reading this week’s DHD. I hope you enjoy!

The Oklahoma City Thunder continue to add drama annually to the NBA trade deadline. This year, the Thunder “stand pat.” They are continuing on with the roster primarily in tact from the start of the season, and if you have been paying attention, this squad is exceeding expectations.

Right now, the Thunder are 11 games above .500 and are in sixth place in the Western Conference standings. They are actually two games out of fourth place, which is rather impressive.

I’m excited and enjoying watching how this team in playing, and their schedule is much easier than the start of the year. Of the 31 remaining games on the Thunder’s schedule, 15 are against teams that currently have records above .500.

Now the talk is beginning about how far could this team go in the playoffs. Of course, a lot depends on who the Thunder face in the first round, but advancing to the second round would be an enormous achievement.

For now, though, let’s see how they handle Detroit this evening.

I mentioned how crazy the weather was this week. As exciting as the snow can be for many, it meant a major event for pro-life Oklahomans had to be cancelled.

The annual Rose Day pro-life rally at the Oklahoma State Capitol did not occur this year. This is a disappointing result, as Oklahoma is losing ground on the issue of abortion. The state predominantly supports the Sanctity of Life, but the abortion rate is increasing. Opportunities like Rose Day are needed to allow pro-life supporters to make their presence known to state lawmakers.

If you are not familiar with Rose Day, visit www.roseday.life. And pray for Oklahoma expectant mothers to choose life for their unborn babies.

The good news for the week for pro-life Oklahomans happened yesterday, as state house members approved House Bill 1182 which would require doctors who perform an abortion to have their licenses revoked.

BaptistMessenger.com reported the result of the voting, 71-21 in favor of the bill.

“This bill holds doctors to their Hippocratic Oath to ‘do no harm,’” Gideon said. “Oklahoma Baptists have stated in the strongest possible terms our unwavering commitment to the unborn and desire to see the end of legalized abortion in Oklahoma. This bill does away with abortion at its very root, calling to account those who would perform and provide abortion.”

This week, I read an article featuring a list of recommended reading for grades 1-8. It was a great time of reminiscing, as I scrolled the list and seeing books I remembered reading in those elementary years, including books on The Boxcar Children and Encyclopedia Brown.

I also saw on the list the author of my favorite book as a child—Wilson Rawls. He wrote “Where the Red Fern Grows,” which is quite popular and was listed on the reading list in the article.

However, my favorite book is “Summer of the Monkeys.” It has some similar characteristics to “Where the Red Fern Grows,” as it also has Oklahoma as its setting and features a boy having adventures with a dog. One reason, though, that I like “Summer of the Monkey” more is because I think the ending is better.

I did not say much during President Trump’s impeachment trial. I know it’s a controversial yet historical event. But I will say that I am glad it is over.

And the person who impressed me the most through the process is Sen. Mitch McConnell, the Senate Majority Leader. Of all the people involved, I thought he acted like the “grown-up in the room.”

If you have 20 mins, check out his press conference that happened soon after the trial concluded, and see if you agree with me about how well McConnell conducted the process.

I conclude with sharing another wonderful story written by Sarah Eekoff Zylstra. This week, she shared a story about a church in the St. Louis area that split more than 20 years ago but recent reconciled and is now restored.

It’s lengthy but worth the time to read, maybe this weekend. Check out “Back Together: The Story of a Church Split and Reunited.”