Hope you have enjoyed the weather change. It just seems like a few days ago we were roasting in 90-degree heat. Oh yeah, we were!

Here’s my thoughts on six timely topics. Thanks for reading!

Today is the 19th anniversary of the terrorist bombing of the World Trade Center, the Pentagon and what eventually ended up being a failed mission that allegedly was supposed to be for the White House.

In 2001, I was living in Hattiesburg, Miss., working in the athletic department at the University of Southern Miss and going to grad school. On Sept. 11 that year, I was preparing for my Stats class, which was probably my least favorite class in my two years of grad school, when I found out about the first plane crashing into one of the twin towers. I then watched the second plane crashing into the other tower.

That was a heavy day across the country. I was in the deep south far away from any of the three states that were directly impacted, but the reactions were felt as if it happened a block away. It was a dreadful, disheartening day, with many innocent lives taken and loved ones in shock and grief.

What I can appreciate is how the country was unified in the aftermath. That may have been the last time all Americans were in full support of each other.

I don’t wish for what occurred on 9/11/01, but one thing I pray for every day is for a similar unity in our country.

This is a heavy read, but Moore has some profound conclusions. I suggest starting with reading the final subhead “Removing Yourself from Foolish Controversy.” And I love his final paragraph:

“Sometimes we must be ready to ‘speak a word’ into a controversy, but often what’s called for is for someone to model the different way of valuing his soul over having something to say. When it comes to those for whom quarreling is life, the way to win is not to win at their game, but to play a different game altogether.”

The Baptist Messenger featured an online article by Aaron Earls on the State of Theology, a survey done by LifeWay Research. It’s an interesting report with some confusing conclusions.

For example, 72 percent of Americans believe in the Trinity—that God consists of the Father, Son and Holy Spirit—but 59 percent believe the Holy Spirit is a force and not a personal being. Fifty-two percent believe Jesus was not God.

A co-worker found it fascinating that those who identify as Evangelical Christians don’t believe many biblical teachings and yet they consider themselves Evangelical. It does seem to be a contradiction.

My word of encouragement is be an example of true believers. Support the Bible as God’s inspired Word and be willing to learn more and more of its teachings, especially the teachings of the Gospel of Jesus Christ.

Trevin Wax gives his own response to the survey mentioned above. In “For Theology, Church Attendance Beats Religious Affiliation,” Wax concludes more can be said about how often people are involved in church meetings, especially small groups. I love the example he gives about a small group Bible study helping peoples’ theological views, specifically how someone could learn about the Holy Spirit being a person and not a force.

Oklahoma Baptist Disaster Relief continues to serve in Louisiana after Hurricane Laura. You can read an updated report on the DR Facebook page.

I received a great story lead about a young lady from Louisiana who started her freshman year at Oklahoma Baptist University. She was only on campus for two weeks when Laura came through her home area. She felt burdened to go back home.

I’ll share more in the Sept. 24 Baptist Messenger, but the young lady connected with DR volunteers, joining them on a trip home to help in the aftermath. It’s a great story!

On Sept. 10, my sweetie Karen turned 50. Celebrating her in the midst of a pandemic is a challenge, but tonight we are observing a “drive-thru” party as friends will be driving by our house this evening to give Karen birthday greetings.

Here’s a picture of Karen with Olive posing by the Happy Birthday yard sign. 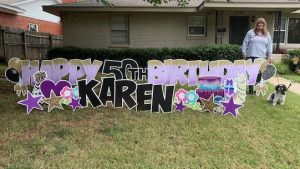