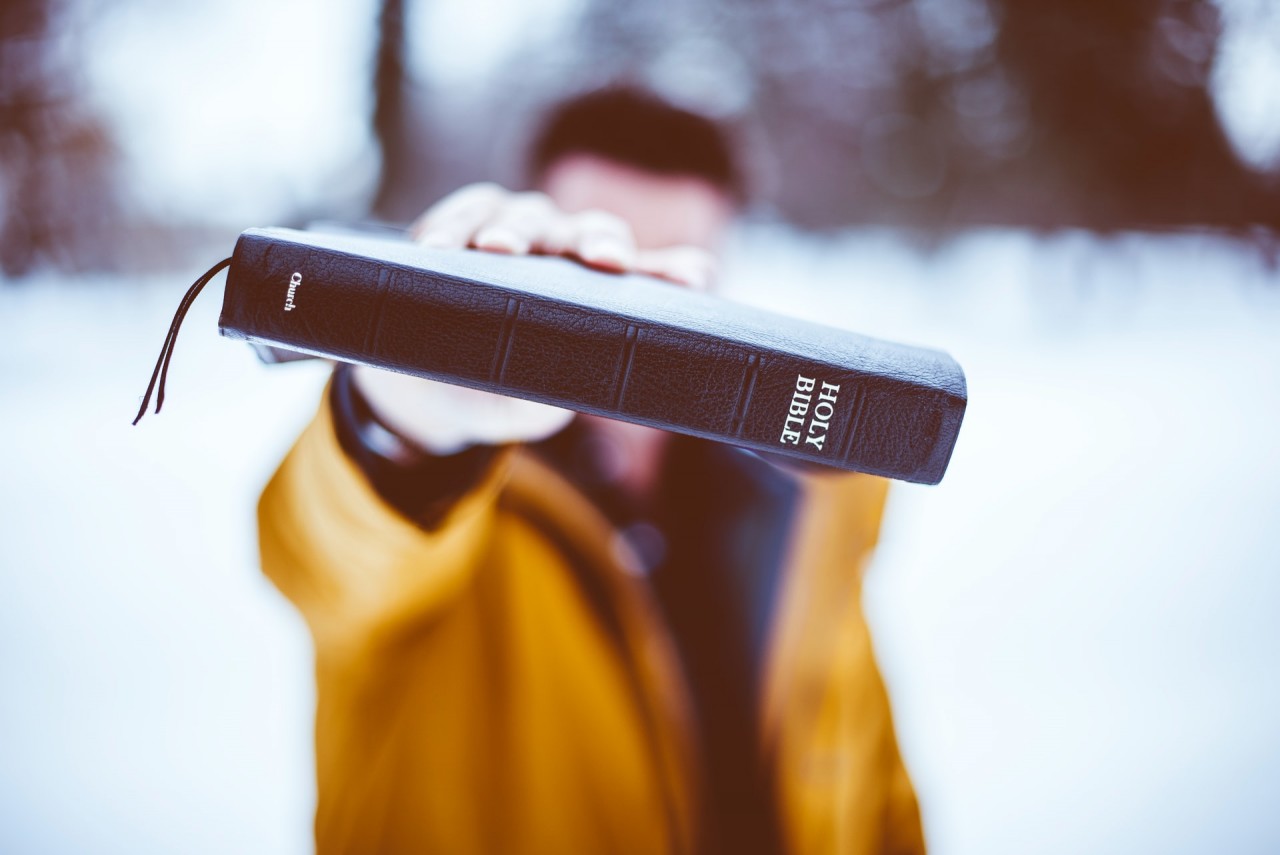 NASHVILLE (BP)—More than half of Americans say religious beliefs are a matter of personal opinion, not objective facts. And that’s made clear by examining the varying, and sometimes contradictory, theological doctrines they hold. 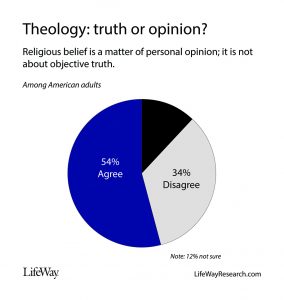 The biennial State of Theology study from Nashville-based LifeWay Research explores the religious and cultural beliefs of U.S. adults.

For 54 percent of Americans, theological beliefs are not a matter of objective truth, but rather belong in the category of subjective personal opinion.

“Many Americans treat theology like a choose-your-own adventure book,” said Scott McConnell, executive director of LifeWay Research. “It’s clear from certain beliefs that some people feel truth is something people are free to define on their own, and in doing so they possess seemingly incompatible beliefs.”

The survey of more than 3,000 Americans is sponsored by Orlando-based Ligonier Ministries and follows previous State of Theology studies in 2014, 2016 and 2018. 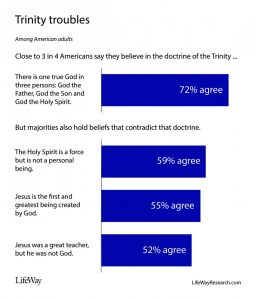 A clear majority of Americans (72 percent) say they believe in the classic Christian doctrine of the Trinity—one God in three Persons: Father, Son and Holy Spirit. Yet most also believe Jesus was merely a great human teacher and the Holy Spirit is a force.

“Christianity has historically started with an understanding of God as the Creator and source of reality itself,” McConnell said. “While many Americans repeat with agreement a definition of this one Triune God, a further look at their beliefs reveals a majority do not believe in each Person of the Trinity as described in the Bible.”

Most Americans have no problem asserting divine perfection, as 65 percent say God is a perfect being and cannot make a mistake.

Half of Americans (52 percent) agree Jesus was a great teacher, but not God. Slightly more than half (55 percent) believe Jesus is the first and greatest being created by God, which runs contrary to the historical Christian belief that Jesus is eternal as God the Son.

While many reject His deity, most Americans say Jesus physically rose from the dead. Two-thirds (66 percent) believe the biblical accounts of Jesus’ bodily resurrection are completely accurate.

Three in 5 Americans (59 percent) agree the Holy Spirit is a force but is not a personal being. For 1 in 5 (19 percent), the Holy Spirit can tell them to do something that is forbidden in the Bible.

Two-thirds of the U.S. (64 percent) say God accepts the worship of all religions, including Christianity, Judaism and Islam.

Few Americans believe learning about theology is only for pastors and scholars (15 percent). 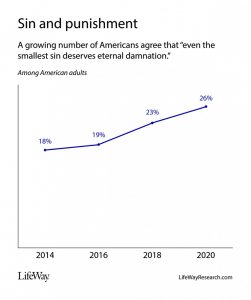 When it comes to sin, most Americans say just a little doesn’t hurt, but a growing number believe even the smallest sins warrant an everlasting punishment, according to the 2020 State of Theology study.

Two-thirds of Americans (65 percent) agree everyone sins a little, but most people are good by nature. Still 26 percent say even the smallest sin deserves eternal damnation, the highest percentage in the history of the study.

“There has been a slow but steady increase in the portion of Americans believing that the deserving punishment for any sin is eternal damnation,” McConnell said. “While the number believing in hell has been steady, those who believe God doesn’t give any free passes for small sins has increased from 18 percent in 2014 to 26 percent today.”

A majority of Americans (56 percent) say hell is a real place where certain people will be punished forever.

More than half (56 percent) believe God counts a person as righteous not because of that person’s good works but because of their faith in Christ.

Most Americans believe they can find salvation only through Jesus. Three in five (60 percent) believe only those who trust in Jesus Christ alone as their Savior receive God’s free gift of eternal salvation.

A quarter of U.S. adults believe salvation was determined long ago, as 26 percent agree God chose the people He would save before He created the world, a doctrine known as predestination.

Three in five (62 percent) believe there will be a time when Jesus Christ returns to judge all the people who have lived.

For some Americans, they believe the rewards don’t have to wait. A third of Americans (36 percent) believe God will always reward true faith with material blessings in this life, a doctrine associated with what has been called the prosperity gospel. 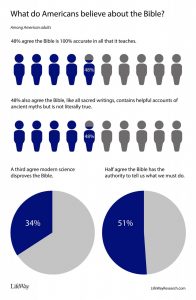 Americans are divided on what the Bible is and what authority it has over our lives.

Close to half (48 percent) believe the Bible is 100 percent accurate in all it teaches. The same percentage (48 percent) say the Bible, like all sacred writings, contains helpful accounts of ancient myths but is not literally true. This number has grown from 41 percent in 2014.

Around half (51 percent) say the Bible has authority to tell us what to do.

A quarter of U.S. adults (25 percent) believe God is unconcerned with their day-to-day decisions.

For half of Americans (51 percent), sex outside of traditional marriage is a sin. By contrast, 2 in 5 (40 percent) believe the Bible’s condemnation of homosexual behavior doesn’t apply today.

Half (51 percent) say abortion is a sin. More than a third (38 percent) believe gender identity is a matter of choice.

View of the pews

Most Americans (58 percent) agree worshiping alone or with one’s family is a valid replacement for regularly attending church. Respondents were asked these questions in March at the beginning of the COVID-19 pandemic, which drastically blurred the lines between worshiping at home and attending church.

“Those answering had no idea what COVID-19 would do to normal patterns of worship in America. March 15 (64 percent) was the last week that the majority of Protestant churches met in person until June 7 (55 percent),” McConnell said, citing LifeWay Research surveys of Protestant pastors conducted in March and July.

“While the pandemic suspended the ability to gather as a local church for worship, a large minority of Americans recognize there is something more to this assembly that a family can’t accomplish on their own.”

For a third of U.S. adults (36 percent), churches must provide entertaining worship services if they want to be effective.

Previous LifeWay Research studies have found little support among Americans and Protestant pastors themselves for political endorsements from pastors and churches. For a quarter of Americans (24 percent) in the latest State of Theology study that doesn’t go far enough. They believe Christians should be silent on issues of politics.

“The theological beliefs of an individual are far-reaching. They impact views of God and the Bible, but also morality, justice, authority and how to treat others,” McConnell said. “A previous LifeWay Research survey found 80 percent of evangelicals say the Bible informs their political views. During this election year, however, Christians should be aware that not only will there be people who disagree with their perspectives, but 1 in 4 Americans will disapprove of a Christian speaking about political matters at all.”

A demographically balanced online panel was used for interviewing American adults for the 2020 State of Theology study sponsored by Ligonier Ministries. A total of 3,002 surveys were completed from March 10-18, 2020. The sample provides 95 percent confidence that the sampling error from the online panel does not exceed plus or minus 2.0 percent. Margins of error are higher in sub-groups. Slight weights were used to balance gender, age, ethnicity, income, region and religion.