Church with a food truck worships in parking lot 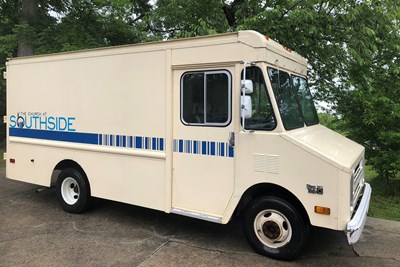 BIRMINGHAM, Ala. (BP) — Jayson Albers, who grew up in a Baptist church, made a living for a long time as an opening shift supervisor for Ryan’s steakhouse.

“When they would start a new restaurant I would go in and train them on how to open the store,” he said. 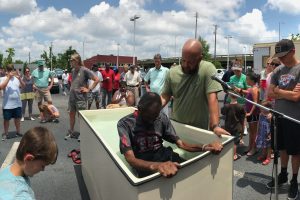 Keith Akins baptizes “Country” at The Church at Southside’s Sunday gathering in a parking lot in downtown Birmingham, Ala. Country subsequently died of cancer. “I know without a doubt he is with Jesus,” Akins says.
Submitted photo

Then life came crashing down — his wife and son died in an accident, something which he speaks little about. One thing led to another and Albers started living in a tent in 2000 near the railroad tracks in Birmingham, Ala.

He’s been there ever since.

“I pretty much know everybody on the streets, and everybody knows me,” Albers said.

But a few years back somebody different started showing up in the city’s homeless camps — Keith Akins, an Alabama native who felt God calling him to start something new.

“We looked into church planting, and we didn’t know exactly what that was going to look like, but we wanted to go into some of the dark and forgotten places in the city that people are leaving,” he said.

So Akins moved his family into Birmingham’s Southside neighborhood and started hanging out with Albers and others who called the city streets home. Akins and some of his friends would go to the homeless camps, cook on Coleman stoves and share a meal with the homeless. Sometimes they would gather up as many people as they could and take them to restaurants.

No matter where they ate one thing was sure — they had no lack of things to talk about.

“It was like reading the Gospel,” Akins said. “Jesus loved to sit down and share a meal. We would just sit down, eat and just have normal conversations. We built some strong relationships.” 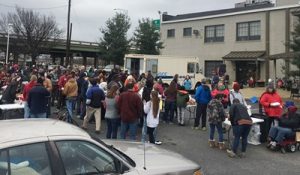 The Church at Southside draws more than 100 people for its breakfast, Sunday worship and food distribution at a parking lot in downtown Birmingham, Ala.
Submitted photo

He talked to them a lot about Jesus over the course of three years — and a lot about church. By that time he had started one in his home — The Church at Southside — which had grown to need its own building. But more than anything Akins wanted it to be a place where anyone felt comfortable.

He asked his homeless friends if they would come. And they said no.

“I was always met with stories about how they didn’t have the right clothes. I would tell them this is different, they could come just as they are, but they would say, ‘No, I’ve been to church before,’ and then tell me horrific stories,” Akins said. “It broke my heart.”

As The Church at Southside began meeting in a leased space in hopes of including the homeless, not one homeless person came through the doors.

At that point, Akins said, the church was nearing the end of its lease, and the congregation of around 40 voted unanimously not to renew it.

“We didn’t know exactly what it would look like,” he said, “but we thought — what if we let the church be mobile?”

They got a food truck and started filling it with food and supplies, and they pulled up in a parking lot downtown and met there.

“For three weeks nobody showed up, and it was just us,” Akins said.

But he remembers vividly the first couple who came — Paul and Amanda.

“We had doughnuts and juice, and we gave them every doughnut we had and told them we’d be there again next week, to bring their friends,” Akins said. 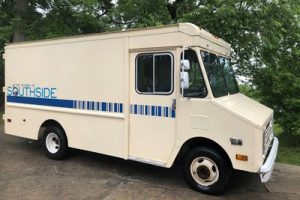 A food truck filled with food and supplies plays a key role in The Church at Southside’s outreach to the homeless. Each week, members bring a variety of items for breakfast, with bags of canned food and dry goods distributed from the food truck after worship.
Submitted photo

Every Sunday morning they serve a hot meal prepared by people in the church, then eat together and have a worship service. In the past two years the church has served more than 10,000 meals.

After the service each person is given a bag of canned food and dry goods.

Albers is the one who unloads the van and packs up the food bags. “It’s not a snack bag,” Akins said. “We actually give a meal like a can of beef stew, pork, chicken or tuna fish — something that’s going to stick to your gut.”

It’s “not your normal church,” he said, crediting the help of a couple, Keith and his wife Jamie, and a handful of others in addition to Albers.

Akins said the church wants to welcome everyone with open arms, no matter what their life looks like. If there’s sin, the love of Jesus will meet that once they meet Him.

“It’s people from all different walks of life,” Akins said. “Not all of the people who come are homeless — some are in lower-income housing and apartments around there.”

And not all of them are jobless. Albers, for instance, works with a landscaping company.

But all have deep needs, Akins said.