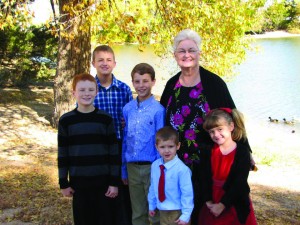 He had been the pastor at Goodwell in Panhandle Association (PBA) for exactly seven years.

“Doug accepted God’s call late in life,” Lula said. “He said he felt called into the ministry while he was in high school, but he never really understood what that meant until quite later in life.”

But, Doug King understood that making preparations for the future was important, and since his church body provided a retirement plan through GuideStone Financial Resources, he contributed regularly through salary deductions, as well.

And, as a result, Lula received a $25,000 Survivor Protection Benefit through the Protection Section of the GuideStone Church Retirement Plan when her husband suddenly passed away.

“I was already (participating) in GuideStone, so we were aware of the benefit available, of course, but it’s kind of a benefit you don’t even know is there because you’re not really contributing to it, so it’s an added blessing when you’re dealing with everything that happens after you lose someone,” said Lula, who worked as secretary for 10 years at Guymon, Grace Southern, and has been the secretary at the PBA office for 10 years now.

“I rolled his retirement fund over into mine. I am 61 and will retire at age 66. I would encourage all pastors, staff and their wives to contribute to the GuideStone fund. It gives you peace of mind,” she stressed.

Lula said she and her husband, like many couples, did not save for the future when they were younger.

“My husband was self-employed as a general contractor and carpenter most of his life, and we were not able to save like we should have, but we contributed to his retirement fund for the last seven years, and when they rolled his account over into mine after he passed away, I was really quite surprised at how much there was in there; quite shocked, really,” she said. “You don’t really think about those things too much until something happens.”

“The Survivor Protection Benefit is open to any paid minister who participates in the Church Retirement Plan,” said Thomas Jordan, Baptist General Convention of Oklahoma (BGCO) church and employee benefit specialist, “as long as the church contributes at least $700 annually to the Cooperative Program.”

“The BGCO forwards $12.25 per participant from gifts received through the Cooperative Program every month to GuideStone to help provide these benefits,” Jordan said. GuideStone also contributes as well, so it’s a combined effort.

“The idea is to encourage church staff to save for retirement, and if they will do this through the Church Retirement Plan, the Convention will provide the Survivor Protection Benefit, the Disability Income Benefit and, in some cases, matching retirement contributions.

“Simply said, we’re trying to get them to realize there are added benefits in saving for retirement.”

“A minister only has to contribute at least $1 per month to his retirement account to participate,” he said. “I tell people that $1 per month won’t get you anything in retirement, but it will get you these benefits in addition to it. So, it’s important they remain current in their participation.”

“The participation rate among churches in Oklahoma is only around 60 percent,” he said. “And, at that rate, I think we’re right at the top among states in the Southern Baptist Convention.”

For more information about the Protection Section of the GuideStone Church Retirement Plan, contact Jordan at 405/942-3800, ext. 4505, email, tjordan@bgco.org.