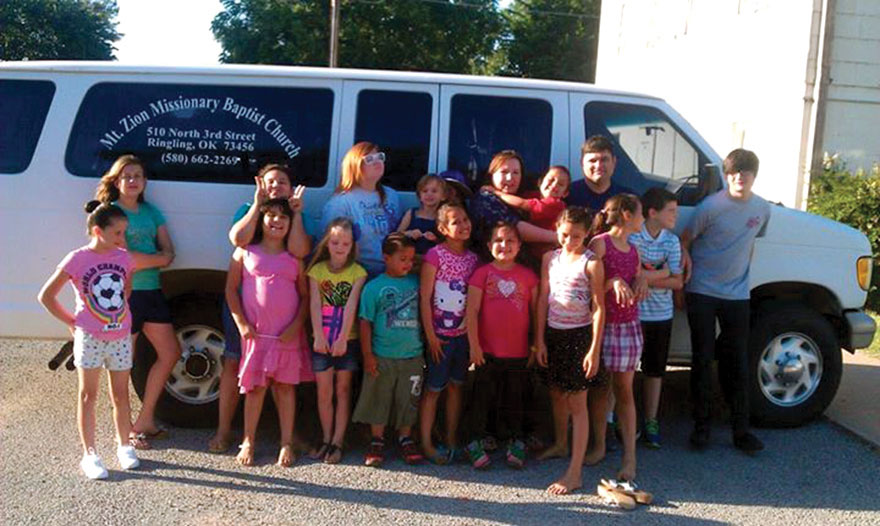 Jeffrey and Amy Willoughy, back row, gather children in front of the van recently donated to Michigan Ave. (Photo: Provided)

CHICKASHA—Jeffrey Willoughby and his wife, Amy, drove by “them” one Sunday morning, and God revealed an open door of ministry they would soon walk through.

“Them” were many neighborhood children who had no church home; weren’t attending Sunday School; weren’t learning about Jesus; and weren’t having the opportunity to change their lives for eternity.

“It was a Sunday, a beautiful fall morning, and we noticed as we were driving to church, all the children playing in the yards along the street,” he said. “These kids were playing outside like kids used to do.  Maybe it was because they didn’t have a video game or maybe there were other reasons, but so many of them were outside on a Sunday morning!

“Amy commented to me, ‘these kids need to be in Sunday School.’”

Willoughby said his spirit thought it was a great idea, but his human nature made him skeptical.

“The Lord always gives her great ideas, but the practical side of me usually says “good luck with that,” he admitted.

However, his compassionate self was burdened with Luke 18:16: “But Jesus called them unto Him, and said, suffer little children to come unto me, and forbid them not: for of such is the Kingdom of God.”  (KJV).

“It took three years, but we have had nine decisions for Christ and nine baptisms since summer camp last year!” Willoughby exclaimed. “That’s what I say to anyone who will listen to me about what is going on at  Michigan Avenue Church. That’s great, but . . .  it’s not really about the numbers.

“The church called me to be its bi-vocational music minister, but the Lord has placed children on our hearts. And, He was ready to give me another job. I don’t mean a job  for income, but a job for Him, or as I like to say, ‘whatever job He puts in front of me.’

“Michigan Avenue is an old church—one which most people considered dying—in a poor area of town, with a small congregation. The Lord gave us a vision and a way to breathe new life into His church. We started a Wednesday night children’s ministry where we feed them and give a short lesson, usually about morality—the Ten Commandments or the ‘Be attitudes.’

“With this approach, we know we are meeting their needs. It is not quick or easy. The kids are unruly, with most mistrusting authority, and not understanding the need for God. It took us more than two years, but after the second year of (taking them to) Bertram Bobb Bible Camp, a low cost  Choctaw Indian camp in Ringold where we have been volunteering for years, we finally got to use a baptistery that had not been used in years!”

And, even as the children’s ministry blossomed, God had more in store for Michigan Ave.

“The funny thing about God is, if you’re paying attention, when you’ve had some success, He’ll give you another job,” Willoughby marveled.

“Amy, in looking for a venue for our engaged daughter to be married, discovered it was expensive! With this realization, the Lord laid another idea on her heart. We had done ‘no cost to you’ marriages for couples who could not afford it, and it was obvious that a ministry in this area was needed.

“What a great opportunity! We simply ask the parents of the kids we are ministering to, or others we might show benevolence to, ‘Is there a reason why you’re not married?’

“The most frequent response given is, ‘we can’t afford it.’ Talk about an open door! Not only are they admitting they need to be married, but they’re also understanding what is the ‘right thing’ to do. Then, by making them responsible for the cost of the marriage ceremony—$50 for non-counseled couples, and $5 for counseled couples—our pastor, Will Fitzwater, has a chance to present the Gospel!”

Since the new Michigan Ave. wedding ministry began six months ago, the pastor  has performed about a half-dozen weddings, and one person has already accepted Christ, Willoughby said.

“In these times of political correctness and maligning of our Christian faith, our churches, and we as Christians, may feel that everything and Satan is against us, but I’m here to tell you Jesus Christ is still at the right hand of the Father,” he exclaimed. “I’m sure there are a lot of other churches across Oklahoma and the nation just like Michigan Avenue where people need to know if the doors are still open, the Lord has “another job” to bless you, your church and your community by spreading the Gospel of Jesus Christ.

“My question to my fellow Christians, pastors and lay people is, how often do you get the chance to really present the Gospel? My answer is, weekly     . . . what a blessing!”