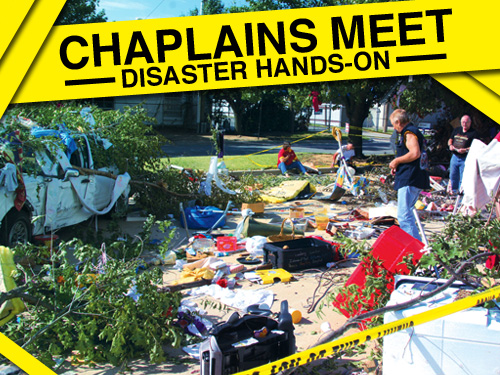 More than 70 Oklahoma chaplains got hands-on experience in dealing with the aftermath of a disaster scene during a Volunteer Chaplain Requalification Training Exercise at the Baptist Building in Oklahoma City Sept. 24.

The exercise was held mainly for the chaplains to meet requirements for requalification as an Oklahoma volunteer chaplain—in whatever discipline they serve, from corporate to hospital, to oil patch to disaster relief.

Other goals were for the participants to review chaplain training, practice chaplain skills, to learn new ideas and concepts and, most importantly, to experience chaplain deployment in crisis.

To accomplish the latter, a mock tornado scene had been set up on the south parking lot of the Baptist Building. The area included structural debris actually gathered at storm sites earlier this year, including tree limbs, pieces of metal from buildings and personal items such as clothing, toys, kitchen items and blankets. Also on site was a severely damaged automobile, complete with tree limbs jutting from its shattered windows.

Paul Bettis, chaplaincy specialist with the Baptist General Convention of Oklahoma, said he was very pleased with the results of the training, which was led by Naomi Paget, chaplain and crisis interventionist for the FBI and for disaster relief organizations such as Southern Baptist Disaster Relief, the American Red Cross and The Salvation Army, who literally wrote “the book” on disaster relief chaplaincy.

“They had done something similar to this in California recently, but it wasn’t as realistic as this,” Bettis said. “This was really good. Some of the chaplains who hadn’t yet been deployed on a disaster commented that they didn’t have a clue that a disaster scene was like this.”

Comments gathered from participants on evaluation forms after the training seemed to bear that out.
One participant wrote, “The hands-on simulation was very helpful to see the reality of what to expect.”
Another commented, “The hands-on training was fantastic.”

Yet another wrote, “The fact that we had structure and we knew where to go for help was very valuable. Please give us more practical hands-on training.”

Another participant felt the class was good preparation for the future, saying, “I learned and experienced many things which in a real situation I should be able to do what is needed and expected.”

The classroom training portion of the eight hours of training involved information from Paget about Critical Incident Stress Management (CISM), including the principles of crisis intervention, the ministry of listening, one-on-one intervention and crisis management briefing. It also included spiritual care interventions for disasters, cultural and spiritual diversity and compassion fatigue.

In addition to the hands-on exercise and refresher course, the chaplains reviewed the introduction to Disaster Relief DVD to recertify themselves as disaster relief volunteers for another three years.