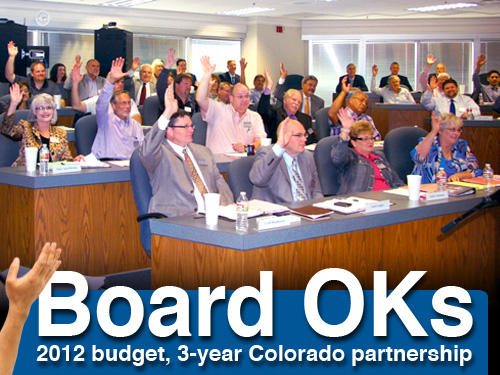 The board of directors of the Baptist General Convention of Oklahoma adopted a 2012 Cooperative Program objective and approved a new state partnership during its meeting Sept. 27 in Oklahoma City.

A new missions partnership with Colorado for a three-year period, beginning Jan. 1, 2012 and continuing through Dec. 31, 2014, was unanimously approved.

“We are already seeing our associations getting involved with Colorado,” said Anthony L. Jordan, BGCO executive director-treasurer. “It may well be the greatest state convention partnership we’ve done.”

In other action, the board approved bylaw revisions of The Baptist Foundation of Oklahoma, Oklahoma Baptist Homes for Children and Oklahoma Baptist University to bring them in line with the BGCO bylaws.

The board also heard a report from Brian Hobbs, BGCO director of communications, who announced the new digital Baptist Messenger, which will be launched at the state convention at Moore, First in November.

The new edition will be viewable on tablet computers, lap tops and smart phones, and be identical to the print version, Hobbs said.

He announced that the church subscription price will remain the same—$8.50 per church member per year, but subscribers will receive the digital edition without adding to the cost. The same is true of individual subscriptions, which will remain at $13.75 per year.

“We are adding to the value without increasing the cost,” Hobbs noted. He also disclosed the print edition of the Messenger is now available at LifeWay stores in Tulsa and Oklahoma City, four Mardel locations, and on the OBU campus, as well as the Baptist Village campus in Broken Arrow.

In his remarks to the board, Jordan said there are three things he wants Oklahoma Baptists to focus on—Sunday School, biblical stewardship and partnership missions.

“In 1880, Walter Camp developed a game called football,” Jordan reported. “The game has changed much since it began, but one thing remains the same—good football teams are fundamentally sound. They block and tackle. We live in a time of great upheaval and change in Southern Baptist life, but I am committed to keep blocking and tackling.”

He said that doesn’t mean it is wrong for us to move in new directions, but it does mean we stay with the fundamentals.

“We want to put our focus on Sunday School,” he declared. “It’s a place where we connect people to the life and work of the church, and it will help any church reach its community.”

Another area fundamental to the Christian life is biblical stewardship, Jordan pointed out.

“People are missing the joy of being faithful with the blessings God puts in their hands,” he said.

The third fundamental area of focus, he said, is partnership missions.

Jordan said the governor of Guerrero is coming to Oklahoma to interact with leaders here and see the power of a strong Christian jail and prison ministry. He will visit and see firsthand prison ministry at work.

“We have already planted a church just one-half block from a major prison in Guerrero,” he divulged. “This is a tremendous opportunity for us.” This church will be the base for a prison ministry.

Jordan said he made two trips to East Asia this summer, taking businessmen one time and ministering to missionaries there on the second occasion.

“We took eight businessmen and visited three cities doing seminars on value and character in business,” Jordan said. “God is doing incredible work among businessmen in East Asia. He said a later team took a medical team and served in a factory where they saw 600 profess Christ.

In August, he said Oklahoma Baptists had an opportunity to help provide a time of physical and spiritual refreshment for workers (118, including children) out of Cluster 6 into Hong Kong.

The board also heard from affiliate presidents and representatives, including Tony Kennedy, Oklahoma Baptist Homes for Children, who told about an opportunity to minister in public schools.

“Because of a lack of funds in the schools, we were asked to help present programs on abstinence, teen mothers and parenting,” said Kennedy. “We were able to relate to our Hope Pregnancy Centers Earn While You Learn program, and increase significantly the number of young people we come in contact with, helping them take information and make wise decisions.”

Robert Kellogg, president of The Baptist Foundation of Oklahoma, said market people he has talked to indicate we’re continuing in a volatile market going up and down.

“We are taking proactive steps moving more into hedge funds,” he said. “But the good news is that we have had a 15.6 percent return on endowment investments. We’ve served 190 families with $10 million in endowments, and 71 percent of those assets will be used for ministry, mostly to our churches.”

Bill Pierce, president of Baptist Village Communities, said they now have a new way to get the Gospel into nursing homes and retirement communities, including those that are not Baptist, through board member Willa Ruth Garlow’s new book, 52 Devotional Bible Studies for Senior Adults.

He also announced that Oklahoma City, Baptist Temple has been conducting worship services at the Oklahoma City Baptist Village for 45 years.

Mark McClellan, director of the OBU Joe L. Ingram School of Christian Service, filling in for President David Whitlock, said OBU is up in enrollment this semester with 1,871 students and continues to receive high rankings from national magazines for its quality and affordability.