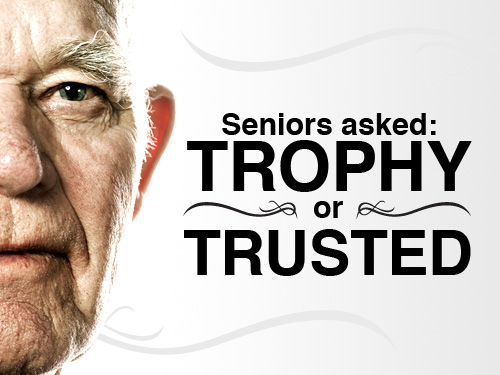 “Are you a trophy, or are you someone who can be trusted?

Rigsby, an itinerant evangelist and grandfather himself who has two grandchildren living in his home, stressed, “If you can walk, you can work; if you can rock, you can roll,” as he exhorted those listening to do as Charles Haddon Spurgeon once said: “Carve your name on hearts, not on marble. A lot of older people today just want peace and quiet and comfort in their later years.”

He asked those present, “Are you a trophy for the Lord, or can He trust you to finish strong?”

Focusing on Matt. 23:23-29, where Jesus rebukes the Pharisees and Scribes for appearing clean on the outside, but being filthy inside, Rigsby, a native of San Francisco, said “the Word of God cleanses the cup” as he urges the listeners to keep sharing the Gospel.

“If you’re not careful, you’ll spend the best years of your life being in a trophy case when God has called you to run an amazing race,” he challenged.

He bemoaned the fact that modern-day society has driven people to build shrines to themselves.
“We live in the most narcissistic society in history,” he said.

“We’re making bibilical frauds,” he exclaimed. “An authentic believer is a shocking sight in 2011. Our society is driving us farther and farther from the Bible. We need to cling to the mindset of a trusted warrior like the Apostle Paul was.”

Rigsby, who is the father of four sons, ranging in age from 28 to 11 from two marriages as a result of losing his first wife to cancer, referenced 2 Tim. 4:13, where Paul tells his son in the Faith to bring him certain items, even when he knew his death was rapidly approaching.

“Paul had the mindset of a trusted warrior,” proclaimed Rigsby, who served as a professor, character coach and chaplain for the Texas A&M football team from 1992-2007.

Rigsby closed by listing four attributes of such warriors, calling them “great people”:

1. Great people do things that other people don’t.

4. Great people never give up.

Journey participants also had several break-out venues from which to choose, including “Sustaining an Active Life in Retirement;” “Leading an Effective Ministry;” “Passing the Baton . . . How to Maximize your Impact to the Second and Third Generations!;” “Giving Your Grandchildren the Greatest Gift—Your Faith Story;” “Organizing a LINC Ministry through Your Church;” “Sharing Jesus through Your Story;” “Ten Missional Opportunities for Women in a Box” and “How to be an ‘On Mission Christian.’”

Bob Mayfield, Sunday School/adult Discipleship specialist with the Baptist General Convention of Oklahoma, brought an update of the Convention’s 6426 Project, which has a goal of the world’s 6,426 unreached people groups being adopted by a Sunday School class in Oklahoma. Those groups represent 2.1 billion people, Mayfield said.

Mayfield said that more than 2,000 of those people groups have been adopted by a Sunday School class to date.