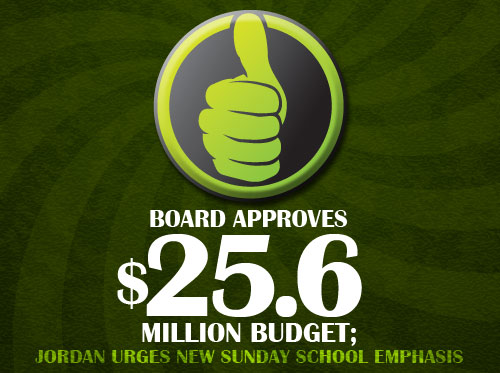 In the wake of encouraging financial news at the end of 2011, the Board of Directors of the Baptist General Convention of Oklahoma unanimously approved a Cooperative Program objective of $25.6 million for 2013 during its regular meeting at the Baptist Building, Feb. 7.

Oklahoma Baptists were faithful to give in 2011, and a CP overage of $1.085 million was received by the BGCO. That allowed the Convention to forward an additional $434,000 to the Southern Baptist Convention (40 percent of the overage).

The Board also approved a proposed plan for the overage as follows:

In his comments to the Board, Executive Director-Treasurer Anthony L. Jordan rejoiced briefly over the blessings from God in 2011, and then turned his comments toward a renewed commitment to a traditional Southern Baptist organization—Sunday School.

“We have had some very difficult days all of us because of the economy, but this last year was a great year, and we saw many significant milestones reached,” Jordan said. “We did exceed the budget by one million, eighty-five thousand, and we  went over our state mission goal and so in every way financially, it was a very strong year. Falls Creek had the greatest year in attendance in our history since 1917,  and so it was a great year in many, many ways and we give thanks to God for that.

“I want to publicly thank Oklahoma Baptists for their generosity and the faithfulness of our pastors who lead their churches to be faithful in giving. We are going to share that wealth around the world in impacting places near and far with the Gospel of Jesus Christ.

“Having said that, I want to focus on one thing very briefly. I have struggled all my life with my weight, and I have heard all of my life two things. If you want to control your weight, you must control your diet, and you must exercise.

“In two weeks, I will celebrate a year of consistent exercise and watching what I eat. I learned through this process that what I’ve been told all through my life really does work.

“So, what does that have to do with anything?

“I knew if I can just organize my church and can start some new classes, my church can probably grow. So, that church that had 20 when I went there ended up with 50 in regular attendance when I left after two years. And we did it by starting some new Sunday School classes.

“So, I learned that’s the way you could reach people and keep them in church. Then, somewhere along the way, Baptists got the idea that  we’d just focus on worship and let Sunday School go by the wayside. That happened in many of our churches.

“Over the last year, I have been praying and thinking about what can we do. Certainly, we can pray for revival, and nothing will ever take the place of a great movement of the Spirit of God. You and I know that, there is no question about that, no matter what we do organizationally, nothing will replace that.

“But I came to the conclusion that Sunday School is not just this old tired organization that doesn’t work. It is like I was before I started exercising and dieting and watching my nutrition. We’ve let Sunday School get flabby,  and we have let it get to the point that we don’t focus on it.

“It really doesn’t matter whether you’re a Native American church, an African American church, an Asian church, an Anglo church or a mixed church. To have an organization that focuses on people, teaches the Word of God, cares for, nurtures and loves people and does it in a  group setting is really the future of how we’re going to conquer, I believe, growing greater churches and seeing our churches begin again focusing on reaching their communities with the Gospel.

“As we move forward, I’m going to lead us to focus on revisiting Sunday School, revitalizing it in our churches, seeking to try to bring our churches along so we are focused again that the key to Sunday School has always been, and when it is at its best, is reaching people with the Gospel, caring about them and loving them as they walk together.

“In the next few months we’re going to try to build a solid foundation and then we will then begin to seek to move out across our state and lead our churches to once again turn their eyes off of themselves and turn their eyes on people around us and build Sunday Schools that will help to organize the work to reach people.

“I am very committed to it. I believe giving Sunday School diet and exercise will help us to reach this state with the Gospel of Jesus Christ.”

Among other items, the Board also approved proposed recommendations:

The next Board meeting will be May 22 at the Baptist Building in Oklahoma City.