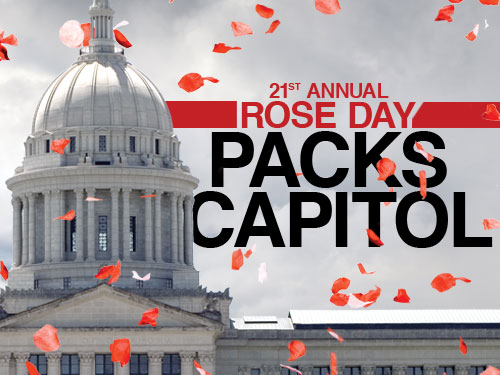 Rose Day, now in its 21st year, is the annual day in which people from across Oklahoma bring roses to their elected officials as a symbol of their support for pro-life legislation. On Feb. 8, an estimated 2,000 men, women and children, bundled up from the cold and with roses in hand, came from all parts of the state to pack the Oklahoma State Capitol.

The Rose Day Committee, which is a collection of volunteers from various faith organizations and is led by the Baptist General Convention of Oklahoma, plans the event, which centers around a time to give roses to lawmakers and then hold a rally.

The rally, which took place in the Oklahoma State House Chamber, was also simulcast with audio coverage into the Senate Chamber. With standing room only in each chamber, participants heard numerous pro-life leaders speak.

The Rose Day Committee is under the supervision of the BGCO’s Heidi Wilburn, who leads the Ethics and Religious Liberty Committee for Oklahoma Baptists.

“I am pleased to tell you there are six pieces of pro-life legislation we are highlighting today that are in view this session,” said Wilburn, who kicked off the program. “One of the key pieces is the Personhood Act (Senate Bill 1433), authored by Sen. Brian Crain, which would affirm that the unborn have full rights and protection under the law.”

To a round of applause and cheers, Wilburn informed Rose Day participants that SB 1433 already passed through the Senate Health and Human Services Committee.

“We talk about the state’s image and how we are portrayed instead of how life is created in God’s image,” said state Sen. Steve Russell, a member of the committee who approved the bill.

Offering the invocation was Archbishop Paul S. Coakley, of the Roman Catholic Diocese of Oklahoma. Coakley recently made headlines for decrying the new mandate from the Federal Department of Health and Human Services that effectively requires religious-affiliated organizations pay for objectionable services, including abortion-causing medication.

“I speak on behalf of the board of directors of the Baptist General Convention of Oklahoma—which represents more than 1,800 Baptist churches and 750,000 people throughout the state—when I say Oklahoma Baptists are as committed as ever to life and the defense of religious liberty,” said Jordan.

“I want to thank Archbishop Coakley and our Catholic friends for taking a bold stance to protect religious liberty in this debate on the Health and Human Services mandate.

“In the past, Oklahoma Baptists have stood shoulder to shoulder with Christians of all denominations to speak out for life and religious liberty. In the days ahead, we will not leave you to fight alone. Instead, we will join you with action and prayer.”

Representatives and state senators from the Republican and Democratic caucuses were in attendance.

“I remember my time as a legislator in the trenches, fighting for pro-life bills,” he said. “When I was elected in 2004, Oklahoma ranked as one of the least safe places in the country for the unborn. Today, I am pleased to tell you were are the second safest in the country.”

Lamb encouraged the faithful in attendance to keep praying for an end to abortion.

The Governor of Oklahoma, Mary Fallin, delivered remarks, as well.

“I remember being a young mother when I first ran for office in 1990,” she said. “During my campaign for the legislature, I found out I was expecting. I had my son between the primary and general election.”

“I don’t just talk to the talk, but I walk the walk,” said Fallin. Holding up a photo of her now college-aged son, she said, “This is why I am pro-life.”

“I am delighted that members of both political parties are here,” added Fallin.

“I personally want to thank each person for coming,” she said. “What a difference you have made.”

The featured address was given by Abby Johnson, who worked for a Planned Parenthood center in Texas.

“For eight years, I ran an abortion clinic,” she said. “It provided abortions up to 25 weeks (in the gestational period.)

I worked for Planned Parenthood until 2009, and was trained in media correspondence. Little did I know at the time that I would later use that training to oppose them in public.”

Johnson’s life changed in September 2009 when she saw something that changed her stance on abortion for good.

“I had justified my sin and participation for years,” she said. “But God put something in front of my face that changed me.”

Johnson was asked to assist in an ultrasound-guided abortion procedure. On the ultrasound screen, she saw a 13-week baby in the womb fight for its life.

“What I saw on the ultrasound was a child who was frantic, struggling for his life. The place that was the safest became the least safe,” she said. “There we were with scrubs in that (operating) room. The boy did not stand a chance.”

“Nobody stood up for him. This happens 4,000 times a day in America,” said Johnson.

The baby’s life was taken, but the tragedy led Johnson to resign the next month. She has since become a leading pro-life advocate.

“Abortion is graphic. It is messy and bloody,” she said. “What are we going to do about it?”

Johnson called on Rose Day attendees to pray and take action. “I have worked with atheists for life, who see the scientific and logical reasons (to be pro-life.) Many of them later become Christians.”

“Some statistics say one in three (mothers) has an abortion, and we give $487 million each year to Planned Parenthood. The other side has Bill Clinton and Bill Gates and a whole stack of bills,” she said. “But we have the number one man on our side—Jesus Christ, and because of this, we will win.”