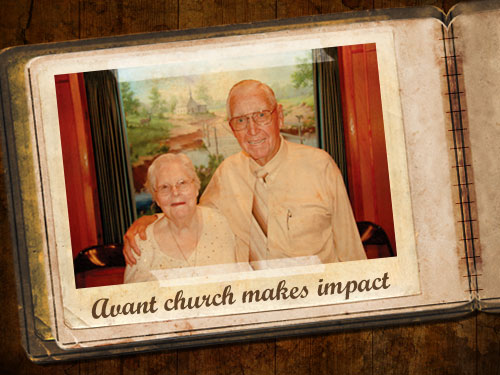 Raymond Henson doesn’t seem to know the meaning of the word quit. The 91-year-old pastor of Avant, First celebrated 40 years of service there last March.

“I was ordained in 1957 and preached as an itinerant pastor in oil field communities,” said Henson, who has been in the ministry since he was 33 years old.

“When I was a boy, my mother and father didn’t go to church,” he recalled. “My mother, though, wanted me to go to church and go up during an altar call at a Baptist church. I was baptized. Years later, I realized I wasn’t saved at that time and then dedicated my life to Christ.”

In the 1950s, Henson knew he was called to preach.

“I have held pastoral positions at three churches in my years of service,” he said. Henson served as pastor at Pawhuska, Lynn and Bartlesville, Liberty Heights.

He and his wife, Laura, will have been married 70 years this June.

“My husband is not one to want to be in the spotlight,” she said. “Two of our four living children are members of Avant.”

The church, part of the Washington-Osage Association, has approximately 30 in attendance in each worship service. The city of Avant, by census results, has a population of less than 500.

“Whether or not you are a member of Avant Church, Raymond Henson is your pastor if you live in Avant,” said Paul Koonce, director of missions for Washington-Osage. “I admire this body of believers so much. There is nothing particularly extraordinary about what the church is doing, but it is doing well in extraordinary ways,” added Koonce.

The church focuses on Sunday School and reaching its community. Members also have forged a partnership with a church in Chfunga, Africa.

“We supply funds and pray for the church regularly,” said Henson.

Henson has led the congregation to be faithful in giving through the Cooperative Program. The church gives 17 percent of its budget to CP and 8 percent to the association.

“We feel a strong connection to Oklahoma Baptists,” said Laura Henson. “I have come to believe the more we give to God, the more we get back. It is a blessing to serve Him.”

Henson remains active, as he still fishes and hunts. For four decades, Henson has faithfully served his church, community, denomination and Lord.

“In today’s fast-paced, bounce-here-and-there ministry world, Raymond Henson serves as a quiet but strong testament to how God can use a faithful person,” added Koonce.

“Avant Church is a good example of what God can do through a church of any size,” he said.