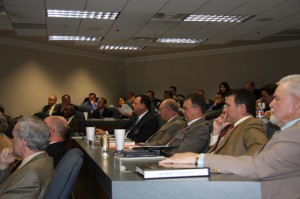 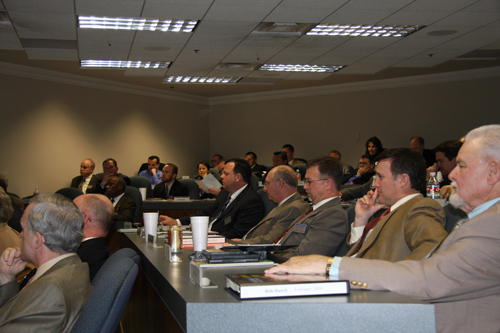 In the midst of approving a 2009 Cooperative Program objective of $25.2 million and a State Missions offering goal of $1.05 million, members of the Board of Directors of the Baptist General Convention of Oklahoma were challenged to sow the seed of the Gospel across Oklahoma.

Meeting at the Baptist Building Feb. 5, the directors unanimously adopted the 2009 budget and the Edna McMillian State Offering goal, which has a “Hallelujah Goal” of an additional $50,000.

In his address to the directors, Executive Director-Treasurer Anthony L. Jordan said looking back over the landscape of 2007, God did remarkable things in Oklahoma.

“We distributed the Gospel to nearly 650,000 homes in ACROSS Oklahoma,” he said. “We dedicated the Falls Creek tabernacle, and Falls Creek opened with the largest attendance and largest number of decisions for Christ in its 90-year history.”

“God found willing people, and people have come to Christ because we loved them and did for them without asking anything in return,” he reported.

Jordan added that the budget was exceeded by $l.68 million, and the State Mission offering for the first time in history was more than $1 million.

But Jordan admitted he feels pain in his heart much like the New England Patriots did after winning 18 straight games and losing the Super Bowl.

“Far more significant than the Super Bowl is that we ended 2007 with the fewest number of baptisms in 50 years,” he said. “My heart breaks over that. There aren’t fewer lost people in Oklahoma, there are more than ever.”

Jordan said the ownership for that statistic has to belong to every church and every church member in the state.

“I hope every pastor and every laity will take a look at their own church and baptism record,” he said. “Our task is to present the clear, powerful claims of Jesus Christ. We need to be faithful to the task, not only for those sitting in our pews, but be willing to pay the price to take the Gospel to the lost.”

Quoting Psalm 126, Jordan said we are a dry, parched land.

“Once again, we will go across Oklahoma (on March 15) distributing 1.2 million Gospels, weeping prior to our sowing, calling out to God to do what only God can do,” he said. “I’m looking to the day when we can bring souls who have been redeemed and the aisles of our churches are filled with people who have come to know God.”

In other business, the board approved the 2007 budget overage be divided 40 percent Southern Baptist Convention and 60 percent BGCO, and that a personnel compensation package adjustment of 3 percent for administrative staff and 4 percent for support staff and a Christmas bonus be approved for inclusion in the 2009 budget.

The board also approved:

_ That the committee and workgroup appointments of the BGCO board of directors established by the officers of the convention be confirmed.

_ That revisions to the Bylaws of the Baptist Foundation of Oklahoma as authorized Jan. 25, 2008, by the Foundation’s board of directors be approved.

_ That Randy Ice, a member of Oklahoma City, Village, be elected to complete the two-year unexpired term of John Shao on the Board of Directors of the Baptist Foundation.

_ That members of the Board of Directors and employees of the BGCO be permitted to participate in the Private Loan Program for Falls Creek Baptist Conference Center, with the exception that BGCO employees must not be asked to consider a full or partial gift of interest and/or principle and may not designate partial or full principle amounts to the Payable on Death to Falls Creek.

_ That the Baptist Messenger mailing functions be moved in-house over a two-year period while using a transitional consultant.

The board also approved a response to a motion adopted at the Arbuckle Association annual meeting, asking the Executive Director and Board of Directors of the BGCO to take a stand against the presentation of reformed theology-often called “Calvanism.”

The adopted response stated that the BGCO by constitutional mandate has no ecclesiastical authority over the churches and has never adopted a doctrinal statement, but that the Baptist Faith and Message has served as a guideline for issues related directly to the work of the convention.

“Therefore, the Board of Directors of the Baptist General Convention of Oklahoma does not find sufficient rationale based on Baptist history, polity and its own constitution to address the concerns set forth by the Arbuckle Association. We furthermore challenge our churches and associations to cautiously deal with doctrinal matters within the broad perspective provided in the Baptist Faith and Message,” the response stated.