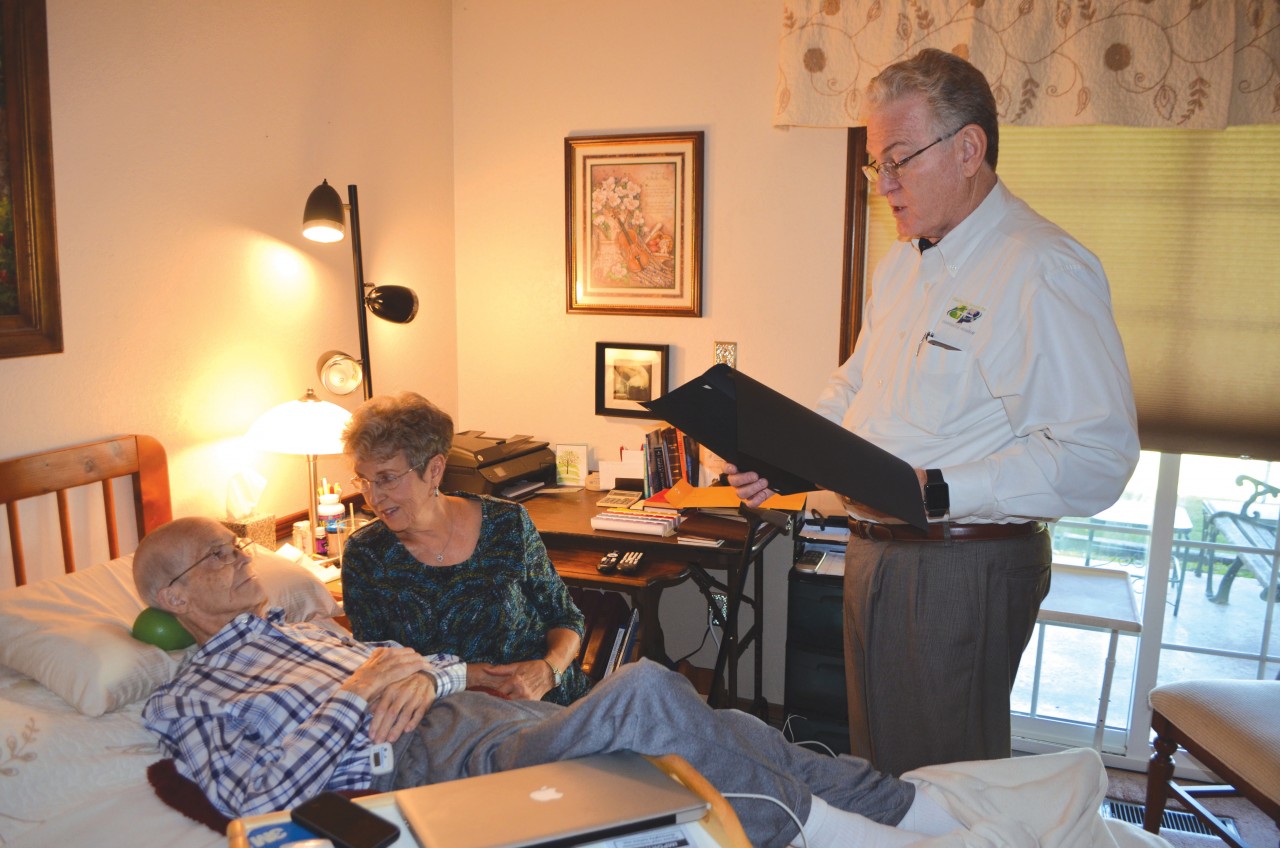 Oklahoma Baptist chaplaincy program founder Joe Williams has been recognized for his significant and long-lasting contributions to the ministry he helped forge with a contribution in his name to the Oklahoma Jail and Prison Ministry.

On Nov. 1, Baptist General Convention of Oklahoma (BGCO) Executive Director-Treasurer Anthony L. Jordan and BGCO Chaplaincy Specialist Don Williams (No relation) met with Williams in his home in Choctaw to inform him of the honor and present him with a formal certificate. Williams, 80, is in the final stages of his battle against bladder cancer. His wife, Linda, ever at his side, also was present.

The certificate, signed by Jordan, reads:

Joe Williams became the first chaplain specialist for the Baptist General Convention of Oklahoma in 1986. Thus beginning a legacy of excellence for Oklahoma Baptists.

Joe began the Chaplain’s Corner at the Oklahoma State Fair, which is still going strong today. Joe oversaw the training and equipping of a massive army of disaster relief chaplains. Joe Williams’ love of people and a desire to see the Gospel spread has left a lasting impact upon Oklahoma Baptists.

To honor 30 years of Chaplaincy, the Baptist General Convention of Oklahoma has made a $3,000 contribution in the name of Joe Williams to the Oklahoma Jail and Prison Ministry.

I believe God is watching and saying, “Well done, My good and faithful servant.”

Williams served as a pastor for more than three decades. He was pastor of Nicoma Park, First in far eastern Oklahoma County when he was asked to consider becoming a chaplain with the local police department, which he did from 1982-87. In 1986, he was jointly employed by the BGCO and the North American Mission Board (NAMB) as chaplaincy and community ministries specialist. A year later, he and his first wife, Dorothy, who passed away in 2003, were appointed Home Missionaries by NAMB.

Williams, who has had more than 600 hours of specialized training in critical incident training and was the founder and director of the Oklahoma Traumatology Institute, became a chaplain with the FBI on Jan. 1, 1991, and attended the FBI Academy in Quantico, Va. He served with the FBI for 23 years until retiring in 2013. He also was a chaplain with the Oklahoma County Sheriff’s Dept. from 1987-91. His service to God in the aftermath of the 1995 bombing of the Alfred P. Murrah Federal Building in Oklahoma City and the resulting trial of convicted and executed bomber Timothy McVeigh; the Sep. 11, 2001 terrorist attacks in New York City and Washington, D.C. and Hurricane Katrina set a standard perhaps never to be matched.

While a list of Williams’ expertise, service, accomplishments and accolades would fill a book, he always gives glory to God for what the Lord has done through him.

Even as his home going approaches, he has a heart for sharing his love for Jesus.

“I want God to be able to take what is happening to me right now and use it to reach people with the Gospel,” he said. “And I don’t want to do anything or say anything or leave the impression that I want sympathy. I don’t need it. I want God to get honor and glory some way, some how.

“It has been a journey I didn’t expect. A friend came by recently and said, ‘A lot of people want to come see you, but, we don’t know what to say to somebody who is . . .’ and I filled in, somebody’s who’s terminal? And he nodded. And I said, ‘So are you. We all are.’ I recognize that I’m terminal; everybody dies. And, I tell the Lord, ‘I don’t want my mind to be engulfed with death and funerals and things like that,’ and He answers that prayer almost every day.”