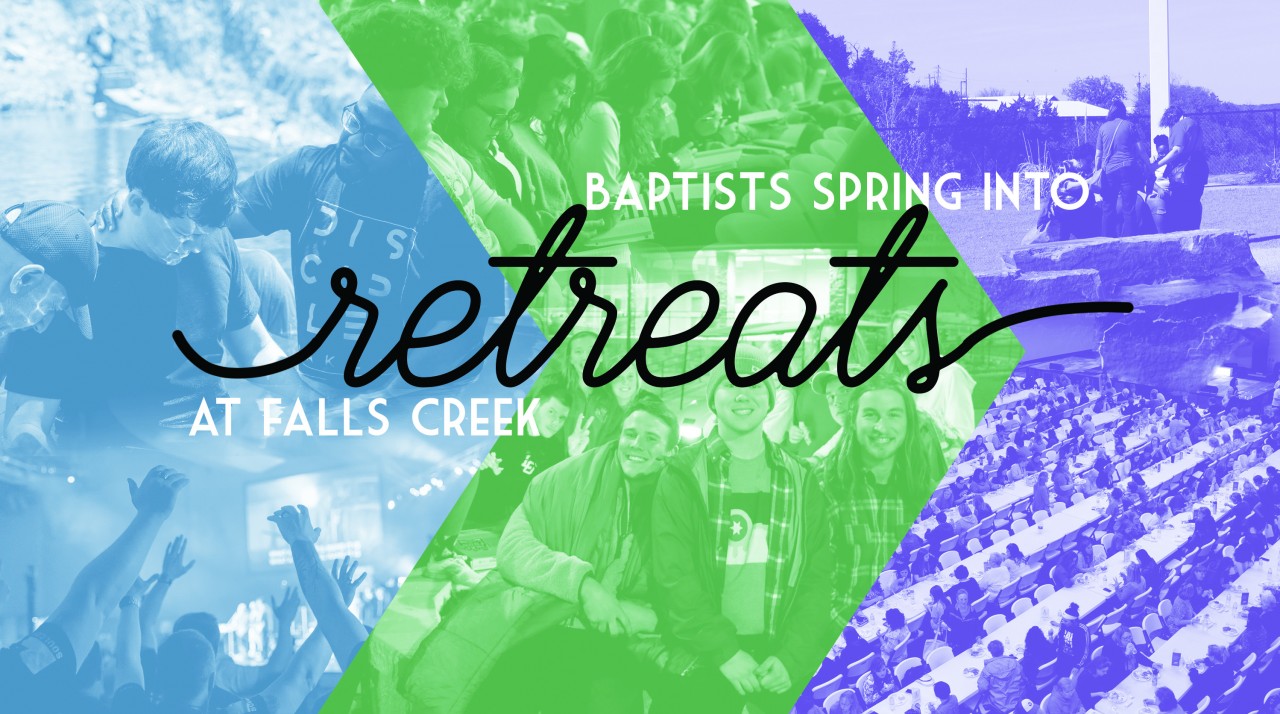 DAVIS—As spring months approach, Oklahoma Baptists prepare for one of the most highly anticipated months of the year. Each April, “College or not” 18-24 year olds, women and men gather for three weeks at Falls Creek Baptist Conference Center for a weekend that promises fellowship, revitalization and time focused on God.

Already, 2019 looks to be a year like no other for all three retreats. 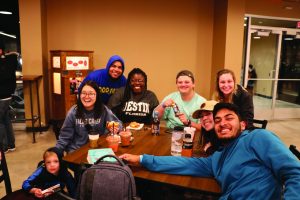 Whether in college or not, 18-24 year olds are invited to attend the Spring Retreat at Falls Creek the first weekend in April. Campers spend time in Cafe 1917 at the 2018 retreat.

One big draw to Spring Retreat is the breakout sessions. This year, the list of sessions covers any topic applicable to an 18-24 year old. There will be a breakout called “Dealing with depression” in which a psychologist will teach those who attend how to deal with their own depression, or the depression of a friend.

“Depression is kind of the number one thing college age people are dealing with, especially the younger ones in that age group. They hurt, but they don’t talk. This breakout will address those issues head-on,” said Chad Coleman, Baptist General Convention of Oklahoma (BGCO) Baptist Collegiate Ministries (BCM) specialist.

International students are certainly welcome at Spring Retreat. There is a scholarship program for all international students to attend free of charge. There will be specific breakouts and multi-session tracks that will divide students into their people groups where they will hear a Christian from their culture share their testimony.

There are breakouts for both men and women, and even a breakout titled “For those who don’t attend breakouts.”

The International Mission Board (IMB) will be at Spring Retreat in relation to the new initiative to send 20 percent more missionaries worldwide. “What I like about this initiative is it’s easy to jump into with BCMs and young adults, we fit,” Coleman said.

IMB will be featured Friday night with a video and an interview with an IMB representative, and there will be IMB breakouts throughout the weekend as well, “Just making it known to students, especially the journeyman program, we’re really going to push that,” Coleman said.

“For years there were three options for students and young adults: be on staff at a church, be a missionary, or attend church and choose a career,” Coleman said. “That’s not the case anymore. Maybe God is calling you to ministry but you really want to be an engineer. We’re really pushing the MVP initiative because there is a big need for pastors in Oklahoma.”

Jeremiah Johnston is the featured speaker for Spring retreat. Johnston travels the country leading apologetic conferences. He will also lead a breakout and host his live radio show from Falls Creek on Saturday. 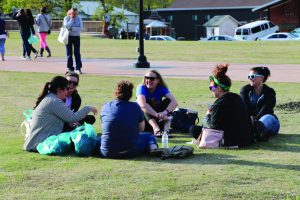 Women laugh on the lawn in front of the tabernacle at Falls Creek at the Women’s retreat in 2018.

An exciting group of speakers will teach to the more than 4,000 Oklahoma Baptist women who attend Spring Retreat, including Lysa TerKeurst, Rosaria Butterfield and Caleb Freeman.
TerKeurst is a number-one New York Times bestselling author of the book Uninvited, as well as 20 other books. She is the president of Proverbs 31 Ministries where she and her staff are passionate about teaching the Word of God in ways that get people excited to live the Bible out loud.

Butterfield has a compelling testimony as a former tenured professor of English and women’s studies at Syracuse University who was involved in a lesbian relationship. She advised the LGBT student group, wrote Syracuse University’s policy for same-sex couples and actively lobbied for LGBT aims alongside her lesbian partner. Butterfield became a Christian in 1999 in what she describes as a “train wreck.” Her memoir The Secret Thoughts of an Unlikely Convert chronicles that difficult journey. Rosaria is married to Kent, a Reformed Presbyterian pastor in North Carolina, and is a homeschool mother, author and speaker.

Freeman is known and beloved in Oklahoma for his miraculous recovery following a life-threatening car accident.

The teenager was seriously injured in a crash in December 2017. He has been recovering and has made remarkable progress. His father, Jeremy Freeman, pastor of Newcastle, First, said, “He has a long way to go, but he has absolutely come so far. God has been working miracles in Caleb’s life, and He continues to do miracles in his life every single day.”

New to the Women’s Retreat in 2019 are two sessions in Spanish, including worship in Spanish. This year, Laura González de Chávez is the keynote speaker. A panel discussion will be held during the Saturday session. Also, every general session in the tabernacle will be translated in Spanish using in-ear radios.

“Women’s Retreat is a great time for women to get away and enjoy spending time with one another as we worship the Lord together,” said Amy Cordova, BGCO women’s missions and ministries specialist. “I am expectant for all that He will do this year in Oklahoma Baptist women through spring retreat.”

Registration for Women’s Retreat is closed.

/// Men’s Rewired
Oklahoma Baptist men, young and old, should prepare themselves for a weekend they won’t forget this year at the Men’s Rewired retreat, April 26-27.

“’The One’ is the theme, based on Col. 1:15-23, which talks about the image of the invisible God that we are to be made in Christ’s image. The goal this year is to point men to a right relationship with the Lord,” said Bubba Burcham, BGCO men’s ministry consultant.

On top of Biblical teaching, activities at Men’s Retreat are often a highlight for those attending, and 2019 will be no different. 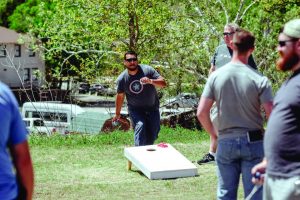 Men that attended Men’s Rewired play cornhole during freetime in 2018. A cornhold tournament will take place at the 2019 retreat. Photo by: Jonathan Burkhart

There will be a knife forger, a barbeque demonstration and a demonstration from a man who owns a lawn mowing business. He will talk about simple upkeep, technique and how he incorporates the Gospel in his work.

Traditional lawn games will also be enjoyed by guests including washers and ladder ball. New to Rewired will be a cornhole tournament. The final two teams will compete on stage before the final main session on Saturday.

Burton is an evangelist based out of Florida, “He does an excellent job of drawing the net, and has a real heart for men,” Burcham said.

Harris played football at The University of Oklahoma and for the Chicago Bears. “He has an incredible story on the influence of a father in the family.”

Saturday, a father and son combination will take the stage. Bobby and Tommy Bowden are two highly-recognized names in college football. Tommy was the head coach at Clemson University before retiring to become a more influential father and grandfather.

Bobby is one of the most well-known and winningest college coaches of all time. “Bobby won multiple national titles while coaching at Florida State, but possibly his biggest accomplishment is an incredible gift for sharing the Gospel,” Burcham said.

“Man Talks” similar to “Ted Talks” will take place on Saturday with a former military special forces marine, a pastor who used to be in prison and a high school basketball coach.

In the Mission’s Center eight televisions will be set up with eight different gaming consoles from XBOX and Fortnite to Nintendo and Super Mario Brothers.

“There is something for everyone at Rewired,” Burcham said. “We want to take the men who come and advance them with the Lord wherever they are on their walk. We want men that don’t know Jesus or are a cultural Christian to know Jesus and ‘get on the team.’ For others, we want to show them what it looks like to be a leader and multiply.”