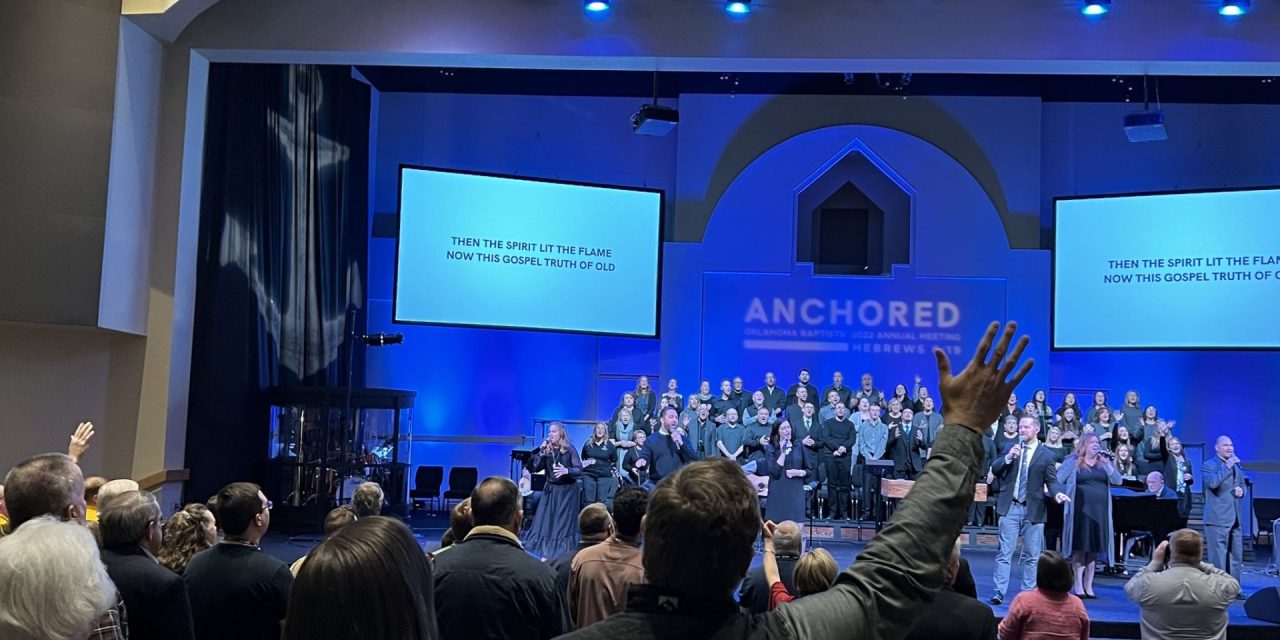 MUSTANG—Oklahoma Baptists gathered for the 116th Annual Meeting on Nov. 14-15 at Mustang, First. The 2022 Annual Meeting theme was “Anchored,” as 700 registered Oklahoma Baptist messengers from 318 churches, as well as other attendees and guests, took part in the faith-filled convention meeting. 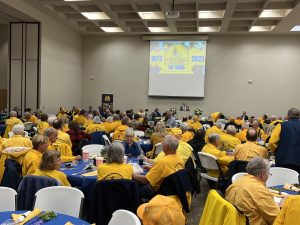 A highlight of the 2022 Annual Meeting was the recognition of Oklahoma Baptist Disaster Relief’s (DR) 50th anniversary. Founded in 1973, the ministry will arrive at 50 years in 2023—five decades of sharing hope, help and the love of Jesus amid disaster. 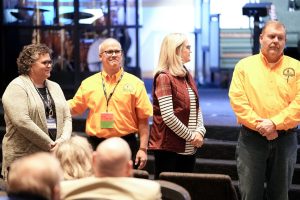 At the recognition banquet, Jason Yarbrough was introduced as the next state DR director. Yarbrough now serves as pastor of Glenpool, First. He will step into his role starting in January. Also, Ryan Deatherage, an experienced leader with Oklahoma Baptist DR, will step into a new part-time role as Oklahoma Baptist DR associate director, through which he will assist in DR training and deployment.

During the opening session of Annual Meeting at Mustang, First, Alan Quigley and Oklahoma Baptist leaders recognized DR volunteers, past and present, as part of the event.

Fisher urges Oklahoma Baptists to be ‘Anchored’ in Scripture
Todd Fisher, Oklahoma Baptists executive director-treasurer, preached Monday evening of the Annual Meeting. He focused on Heb. 6:13-20 and the theme “Anchored.” 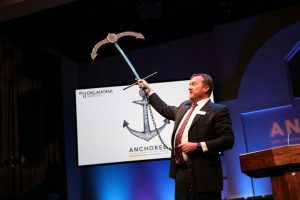 “We chose this theme principally for two reasons,” Fisher said. “One, it’s a good reminder that in a culture and society that is swiftly moving away from God and the doctrines of the Bible, we must be anchored in the message God has given us—the Word of God.”

“Secondly, our theme will hopefully remind our churches, pastors and staff that, in Christ and His Word, we find an anchor of encouragement. As I have traveled our state these past 11 months, speaking at associational pastor meetings, preaching in churches and other events, I have discovered that many of our churches are struggling. Many of our pastors are discouraged.

“However, when we remember that our calling, our ministry, our identity, our purpose, our confidence and our hope are anchored in Christ, we find encouragement to keep our hand to the plow, to shepherd our people, to preach and teach the Word with accuracy and passion, and to keep moving forward in advancing the Gospel.”

Fisher continued, “The author of Hebrews seeks to encourage his readers who are being tempted to turn back from following Christ because of the pressure the world is putting on them by believing God’s Word and promises and by finding their confidence and hope in the steadfastness of Christ.”

Fisher also shared his vision for Oklahoma Baptists, for the state convention to “serve and support churches.”

“We will carry out state convention ministries in a way that is church-centered and Gospel-focused,” he said. “We are committed to and focused on our message (the Word of God) and our mission (the Great Commission). We will honor Baptist polity in recognizing the autonomy and authority of the local church in our convention philosophy and operations. We will be good stewards of Cooperative Program funds, the Edna McMillan State Missions Offering and other gifts to maximize their impact and effectiveness for missions and ministry.

“We value the significance and contribution of every Oklahoma Baptist church—both large and small, in every location—both metropolitan and rural. We value associations in serving churches through communication and coordination with associational leaders.”

“Let’s not forget to humbly continue to trust God and His Word,” Fisher said. “To find truth, confidence and hope not in the world, but in Him.”

Other Annual Meeting sermons
Oklahoma Baptists’ President Chris Wall, who serves as pastor of Owasso, First delivered the president’s address on Tuesday. Wall spoke on 1 Peter 5, where Peter writes about exhorting elders to care for “God’s flock,” being the church. 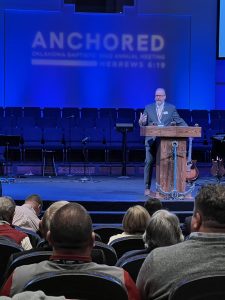 “God cares about what we are doing,” he said. “I believe it’s time for Oklahoma Baptists to stop talking around each other and start talking together.” Wall said these projected conversations will help unite Oklahoma Baptists to be more effective with the Gospel “in our communities, in our state, across our nation and everywhere around the world.”

Wall plans to organize times for these conversations in the coming year, inviting pastors across the state to attend.

On Tuesday afternoon, Duncan Blackwell, pastor of Elk City, First delivered the annual sermon, preaching on how we must be anchored in God’s presence. He shared his appreciation for the influence of Oklahoma Baptists in his pastorate.

“I am so grateful to God for Oklahoma Baptists and for the way that He used and will continue to use this convention in the lives of so many people,” Blackwell said.

Blackwell preached from Heb. 10:19-25, exhorting Oklahoma Baptists to desire to be in the presence of God.

“Why don’t we come into His presence, not because we need anything, but sincerely, because we just want Him?” Blackwell exclaimed. “That would solve a lot of our problems in the Southern Baptist Convention. If we would come with a sincere heart and a sure faith… He would receive us into His presence.” 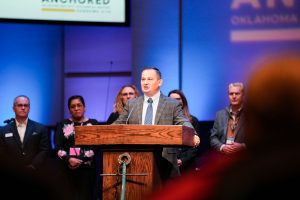 On Tuesday, Pastor Eric Costanzo of Tulsa, South Tulsa presented a report from the Oklahoma Baptists’ Abuse Prevention and Response Task Force. Costanzo also introduced new resources for churches during the Annual Meeting, which are now online at oklahomabaptists.org.

“These resources will show pastors and churches how to develop policies to better protect your most vulnerable members,” said Costanzo, who noted that Southern Baptists should do more to prevent abuse and care for abuse survivors.

The new resource offers extensive information on topics including “How to screen and train employees and volunteers;” “Improving the safety and security of your ministries;” “What do you do when someone discloses abuse to your church leadership;” and “How can church leaders shepherd victims through the devastation of abuse.”

Key reports & other business
The Tuesday morning session included reports from OBU President Heath Thomas and Oklahoma Baptist Homes for Children Interim President Michael Williams. The afternoon session featured ministry reports from Robert Kellogg of WatersEdge and Bill Pierce of Baptist Village Communities. Each affiliate ministry offered key highlights, videos and updates about the Gospel impact they are having in Oklahoma and beyond. 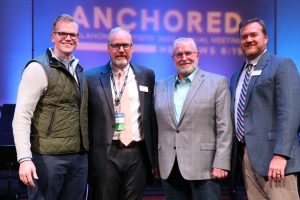 On Tuesday, Fisher highlighted the impact of the Cooperative Program (CP). He showed a full color pie chart that broke down where all CP funding goes. He also debuted a new video, “The Journey of a CP Dollar” that tells the story of how each dollar given through the CP makes an impact (charts and videos are downloadable at oklahomabaptists.org).

A resolution also was approved Against Recreational Marijuana. It reads, in part, “We are alarmed at the rapid advance and acceptance of marijuana in our state… We pray that Oklahoma will maintain legal barriers between these substances and the communities they devastate, and that the church will work with Christ-centered ministries to reach people who are impacted by addiction.”

To read all resolutions, visit oklahombaptists.org/annual-meeting.

Oklahoma Baptists ‘blessed’ by Annual Meeting
Pastors and others expressed their appreciation for the annual meeting over social media and during the events.

Kenny Mossman, pastor of Carnegie, First, said, “This was an exceptional two days for Oklahoma Baptists. From beginning to the end of the pastors’ conference and annual meeting, I was blessed and energized by all I experienced. It is a joy to see how the Lord is using Oklahoma Baptists to advance the Gospel in our state and around the world.”

Throughout the two days, there were several auxiliary events and fellowships, including a special dinner for International Mission Board Oklahoma missionary families, a directors of missions luncheon, a young pastor’s lunch, a student minister’s lunch and more.

Videos of sermons and other annual meeting coverage will be posted in coming weeks at oklahomabaptists.org. The 2023 Annual Meeting is scheduled for Nov. 13-14 at Del City, First Southern.