Advance Conference to focus on evangelism & discipleship ‘Together’

UPDATE: Due to the most recent forecast of inclement weather and related safety considerations, the Advance Conference, previously set for Jan. 30-31, has been postponed to a later date that will be announced in the coming weeks. We look forward to hosting this Oklahoma Baptists event in the near future, as we seek to advance the Gospel together.

A coin has two sides. One side is commonly called “heads,” and the other side is called “tails.” Neither side is in view of the other, but together they create the identity of a coin. 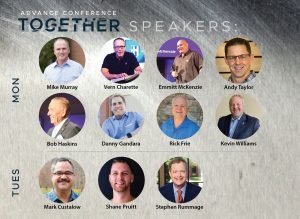 The relationship of evangelism and discipleship will be the focus of the theme “Together” at the upcoming Advance Conference, previously known as the Oklahoma State Evangelism Conference, Jan. 30-31, at Oklahoma City, Quail Springs.

“One of Oklahoma Baptists’ most beloved leaders Bob Haskins will be stepping into the pulpit to share his heart on discipleship and evangelism,” Quigley said. “You may know the name, but here is your opportunity to get to know the man.”

Shane Pruitt, national next gen director for North American Mission Board, and Kevin Williams, pastor of Villa Rica, Ga., First, are the two national speakers. Pruitt is well-known among Oklahoma Baptists for speaking during the Falls Creek youth summer weeks. Quigley said Williams pastors one of the fastest growing churches in the southeast.

Geron Davis will be leading worship through music during the main services. He and his group Kindred Souls led worship times during last year’s Advance Conference.

“Geron has written many of the songs we love to sing in worship” Quigley said. “We’re going to have groups from Oklahoma Baptist University and student worship team lead us during the Monday night service, and Geron will invest time and will disciple these young worship leaders.”

Tuesday morning, Jan. 31, will offer breakout sessions for the many ministry focus groups. The conference will feature some of the best teachers on evangelism and discipleship in various areas of ministry.

For more information including a full schedule of the two-day event, visit oklahomabaptists.org/advance.