A new land, a new family 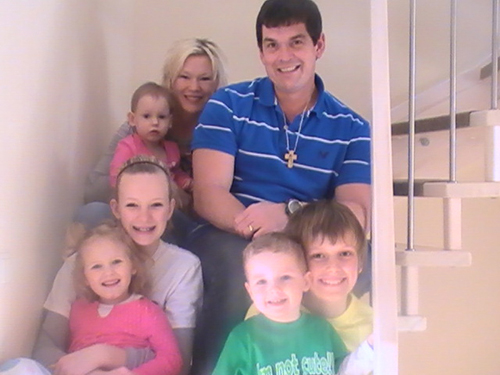 They have new names, new parents and a new country.

Just a few months ago, they were living in an orphanage in Latvia. Now they are home on a small acreage in Blanchard and starting a new life.

“I had always wanted to go on a mission trip,” said Mark Bailey, a Mustang police officer. “But I never expected it to lead to increasing my family by four members.”

Mark and Stacy have been married six years. Mark brought two children, Mitchell, 14, and Macky, 12, into the marriage, and Stacy has a daughter, Sierra, 12. They wanted children together, but it never happened. Stacy had often talked of adoption, but Mark was reluctant.

Yet things changed when Mark went to Latvia.

“I met Jay Heffron, a member of Oklahoma City, Emmaus, at a men’s retreat,” recalled Mark. “He had been on a mission trip to Latvia, and that was all he could talk about.”

Because Stacy had been on mission trips, she decided Mark should go on this one without her. The 14-member team did construction work on an orphanage, which owned property being converted into a summer camp for kids. The Middleburg group enlarged a dining hall, built wood sheds and cut lumber—the only source of heat—and conducted a Vacation Bible School.

“Most of the kids at the orphanage don’t trust men because of the abuse they’ve suffered along with alcohol and drugs,” said Mark. “But we were told to interact with the kids if they responded to us. For some reason, they took to me.”

Mark called Stacy and told her how beautiful these children were. “And if you still want to adopt . . .”

“This story is so full of God,” remarked Stacy. “Mark going there alone and making up his own mind. Adopting a child from Latvia was the last thing on my mind, but that’s where God led Mark.”

Three children in particular captured Mark’s heart, but they weren’t open for adoption.

However, when Mark returned home, he and Stacy began the adoption process.

“We sent these children birthday cards and gift boxes, and the orphanage sent us photographs,” said Stacy. “We felt compelled we were to adopt, if not these three, then God would have the perfect family for us.”

The Baileys began paperwork in August 2008, and in December completed it. But the home study they had been using claimed bankruptcy in April.

“We lost everything, including the money we had put down,” said Stacy. “We had to start over.”

This, however, turned out to be a blessing for the Baileys. In December, the orphanage called and told them another little girl had been brought to the orphanage—the sister of the three they were hoping to adopt.

“They told us they hoped this wasn’t a deal breaker, but now there are four kids,” said Mark.

The Baileys found another agency, got the paperwork corrected and were approved for four instead of three children. In June 2009, the mother forfeited the right to all of the children. The only remaining obstacle was that Latvians had to be given the first opportunity to adopt the children.

“As bad as we wanted things to happen quickly, God brought it all together in His time,” said Stacy. “He taught us to be patient for good reason.”

In the meantime, Stacy got a promotion at work, and Mark was moved to the day shift.

“God also prepared us mentally for four children,” said Stacy. “We could have gotten a different batch of kids, but we got the ones we wanted.”

Earlier this year, Mark, Stacy and Sierra visited the children for two weeks in a foster care program.

“We were provided with an apartment, translator and a car when we needed it,” said Mark. “The orphanage, which is run by Christians, is very concerned about the children, and sent a case worker to see how we were doing with them.”

“She said she was touched by the way our family bonded,” said Stacy.

Although the children have new “American” names, the Baileys kept their Latvian heritage in their middle names. They are McCale Gatis, 11; Sparrow Klinta, 4; Mace Raifs, 3, and Sophia Patricjia, 2.

The children were approved by U.S. Immigration to be brought into the United States. The Ministry of Adoption in Latvia issued a court date for the Baileys to attend, which granted the adoption, and 20 days later, the Baileys were allowed to “take possession” of the children and bring them to their new home in Oklahoma.