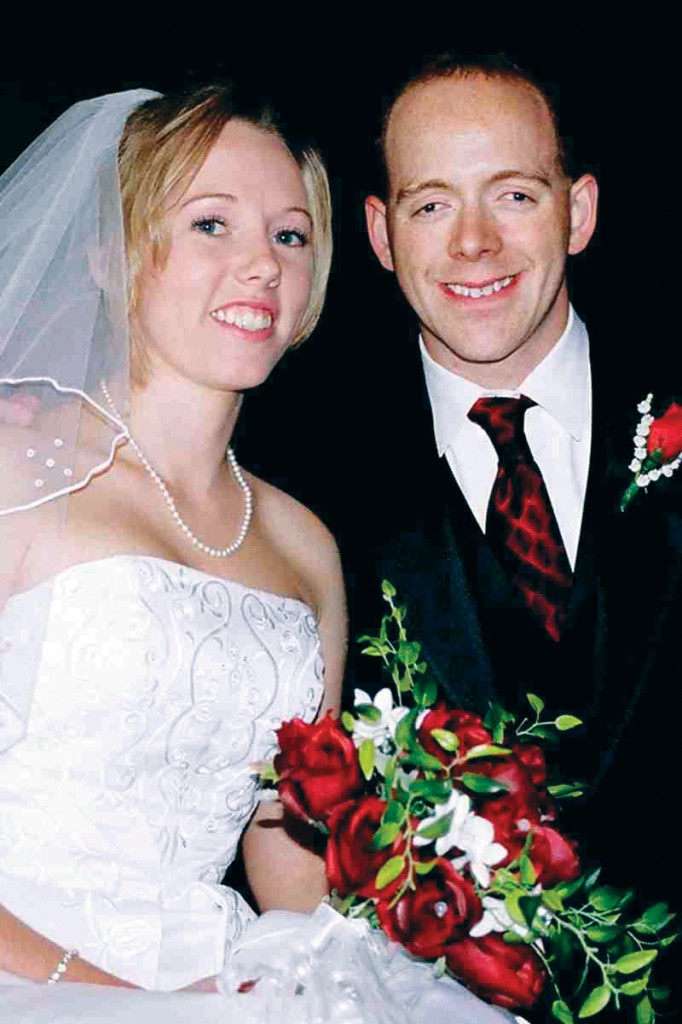 Matt Click and Jamey Bennett met at Northwestern Oklahoma State University. “Matt and I met at my first BSU event my freshman year at NWOSU in the fall of 2001,” recalled Jamey. “I’ve admired Matt since the first day I met him. Though we became fast friends, it wasn’t romantic love at first sight for me.”

Matt recalls that same evening, seeing Jamey and thinking he should introduce himself.

“I learned her name and where she was from and also that she was a cheerleader for the university cheer squad,” Matt remembered.

By the time Matt was a senior and Jamey a junior, they were heavily involved in university activities and the BSU and had done many projects together.

“We always enjoyed one another’s presence,” said Matt. “However, I was still in the dark when it came to girls.”

Matt was planning to go overseas as a journeyman, and a few weeks after graduation, he was in Richmond, Va., getting oriented to work and live in an Asian country.

“It was during that time, I began to write letters and make phone calls to Jamey,” said Matt. “I was realizing this was just the kind of woman I wanted to marry someday. However, since I would be leaving the States soon, any hope of a real relationship seemed slim to none.”

Matt spent his last night in America before leaving for Asia with two close friends from college. One of them was Jamey.

“At the time, I didn’t know it, but I was falling in love,” recalled Matt. “I had never had a girlfriend before, and now I was getting ready to be gone for at least two years.”

Matt said he hated his first week overseasa, and had it not been for some encouraging e-mails from Jamey, he probably would have hopped on a plane and returned to the United States.

“Within a week’s time, I was smiling again,” Matt said. “And it wouldn’t be long before Jamey and I began calling ourselves “boyfriend” and “girlfriend.” Yet the physical distance between us was vast, but there was no denying the obvious-the two of us were meant for each other.”

The two e-mailed back and forth and spent some time on the phone for two years. Then in February, 2006, Matt “popped the question” via e-mail.

“Jamey, is it possible for you to come visit this summer?”

“It was a bold move,” said Matt. “She was in America. I was in Asia. And technically, we weren’t even dating. However, I knew if we were ever to work out, she needed to come see me in the very place that had become my beloved home.”

Jamey said she started planning to visit Matt in Asia, but due to her work schedule and the amount of time it would take her to save for the trip, she knew she would not be able to go before spring break of 2007.

“Matt would be coming back to the states just a month after I was to visit him, so the question of my family, friends and co-workers was, ‘Can’t you save yourself time and expense and just wait until he gets back?'” said Jamey.

She said she could have waited, but God had been speaking to her about a future with Matt and about a lifetime of serving Him overseas.

“I knew I needed to see Asia, and I needed to see Matt in it,” she said. “To serve the man I loved (although I had not yet told him) and the God I loved, it was crucial I see what Matt had seen, eat what he had eaten, walk where he had walked, to see the face of God in Asian skin and build relationships with those who had been Matt’s family, friends and co-workers.”

A couple of months before her trip, God provided Jamey with travel companions; her brother, Shane, and college friends, Keil and Teresa.

Jamey said before she left the States, she and Matt talked about the direction of their futures and shared their mutual hopes and dreams.

“In my heart, I was sure Matt would ask me to marry him someday, but I wouldn’t allow myself to get my hopes up for an overseas proposal,” she said. “My plan was to follow him to seminary in the fall, whether we were married or not.”

“I waited, and then there she was,” said Matt. “More than two and a half years of no face-to-face interaction-all but forgotten.”

He had asked a friend to call him while he and Jamey and their friends were at dinner, and ask him to bring Jamey to a nearby park so she could meet her.

Matt and Jamey found an empty park bench and waited. Matt began his monologue, but Jamey was concerned his Asian friend might not be able to find them, and she was also worried about the friends waiting for them back at the restaurant.

“Matt started talking all mushy about our relationship, but I was not toally focused because we were missing our last night with our friends while waiting on this girl I had never met,” recalled Jamey. “Then Matt began fumbling with something in his coat pocket, and when he went down on one knee, I finally realized he was proposing.

“I was thinking, ‘Oh, he’s proposing and I haven’t been paying attention to what he was saying . . . start over.'” she said. “I was totally focused by the time he said ‘Will you marry me?’ and I meant it with all my soul when I said, ‘Of course.'”

Then, out of nowhere came Jenny, Matt’s Asian friend, and Jamey realized Matt had been planning this for sometime.

The couple was married July 28 at Enid, Emmanuel, and will be attending seminary this fall and plans to return as missionaries to Asia.

“I consider it an honor and a privilege to be Matt’s wife,” said Jamey. “He’s my best friend, confidant, encourager, hero, helpmate and fellow companion in the good fight of faith. I am excited about living an extraordinary lifetime expressing my genuine love for Matt, but first and foremost, my love for our God.”

“God has been super good to us,” said Matt. “Jamey is my best friend, my biggest supporter, a fantastic encourager, who continually spurs me on with her radically God-centered view of the world and life we live. Jamey was just too amazing to let go of.”