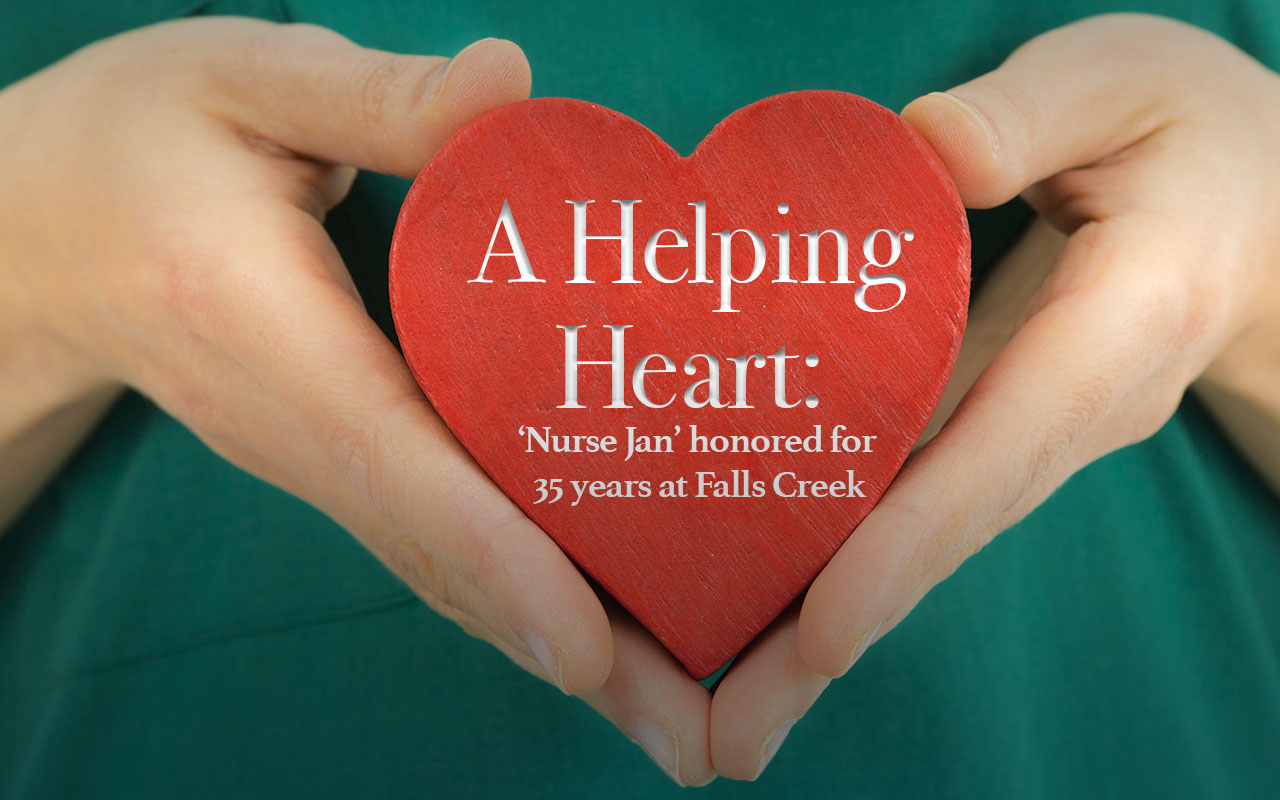 DAVIS—Thirty-five years of serving in the first aid station at Falls Creek Baptist Conference Center encompasses a lot of memories. Jan Glenn said she is “just in awe that the Lord would place me up here,” but now, her name will be placed on the building where she has worked many summers.

On Fri., July 22, at the final evening service of Week 7 of Falls Creek Youth Camp, Anthony Jordan, executive director-treasurer of the Baptist General Convention of Oklahoma (BGCO), announced to the assembly that the encampment’s medical clinic would officially be called the Jan Glenn First Aid Building.

Glenn was surprised as she stood next to Jordan when he shared the news from the stage. The announcement was followed by loud cheers from the whole camp, including a group from Ardmore, First, where Glenn has been a longtime member.

A dedication service is being planned for the Jan Glenn First Aid Building this fall.

For the last 10 years Glenn has served as administrator of the First Aid Station. Her nursing experience includes working as a school nurse in Lone Grove for 20 years. She also has worked in an advisement role for Murray State College in Tishomingo. 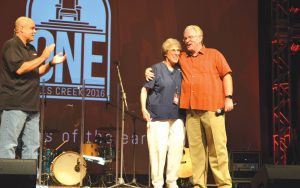 She was recognized by Anthony Jordan, BGCO executive director-treasuer, right, along with Andy Harrison, Falls Creek Summer Camp program director, left, during an evening service, as they announced the First Aid Building will be named after her.
Photo: Chris Doyle

“In my tenure as conference center director, I never had to worry about the clinic being stocked or staffed for any of the large events we hosted,” said James Swain, former conference center director who now serves as team leader of the BGCO Equipping Team. “What I appreciate most about Jan is she is always concerned about the health and well-being of our staff. The summer staffers all love ‘Nurse Jan,’ and her influence is seen in many who are now in the medical field. She has been a tireless servant of the Lord who has demonstrated His love and compassion to all she has encountered.”

The Baptist Messenger featured a story on “Nurse Jan” in 2006, acknowledging her 25 years of service at Falls Creek. The story focused on Glenn’s family as many of her family members worked different roles at the summer camp.

Her sister Cindy was quoted saying “most kids come in crying and go out smiling because of Nurse Jan,” referring to the many injuries and illnesses Glenn helped treat over the years.

Glenn remembers the days of the open-air Tabernacle when the medical staff had to be prepared for campers suffering from heat exhaustion. They would treat students in B.B. McKinney Chapel, which sat next door to the Tabernacle.

“We would lay sheets out on the stage for them to lay on, take their vital signs and cool them off. It was a full time job,” said Glenn. “We’d see 35-50 kids.”

Her experiences with campers have not always involved medical treatment. She and others on the medical staff have been available to help with spiritual matters too.

“We need to be close to the Lord and be in tune with the kids because a lot of times they come up with very vague physical complaints when actually they are under conviction. We’ve had opportunities over the years to lead them to Christ,” Glenn said.

Glenn wasn’t sure if she would be back this summer. She was diagnosed with cancer last year, but thankfully her chemotherapy treatments have been successful. Though her weekly schedule has curtailed, she did return for her 35th summer at Falls Creek. She said she plans to keep coming every summer until “whenever the Lord tells me I don’t need to be here anymore.”

If it were up to the many who work with “Nurse Jan,” they hope the Lord doesn’t deliver that message anytime soon.