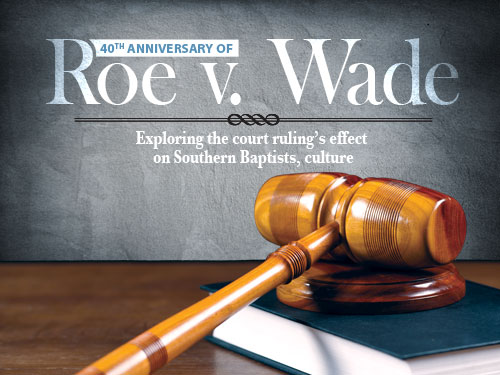 America will reach the 40th anniversary of legalized abortion Jan. 22. On that date, pro-life advocates will grieve and abortion rights defenders will celebrate Roe, the opinion that—coupled with a companion ruling, Doe v. Bolton— had the effect of striking down all abortion restrictions and legalizing the procedure nationwide for virtually any reason at any stage of pregnancy.

When the high court issued those decisions jointly in 1973, Southern Baptists were either uninformed or misguided—and consequently unengaged—at the grass roots, but supportive of abortion rights at the institutional level and through the resolution process, Richard Land and Jerry Sutton told Baptist Press. Now, Southern Baptists are overwhelmingly pro-life.

That contrast four decades ago between the grass roots and some denominational leaders produced discord as the massive death toll of unborn babies mounted in the 1970s.

Meanwhile, the effort to restore the Southern Baptist Convention’s institutions to a belief in biblical inerrancy began in 1979 with the election of the SBC’s first president committed to the Conservative Resurgence. By then, the abortion issue had become a driving force in the movement, Land and Sutton said.

The abortion issue “was part of the Conservative Resurgence, and I think that it played a role that the moderates never understood,” Land said of those Southern Baptists who disagreed with the effort to reform the convention’s institutions. “I think the moderates, being mostly pro-choice themselves, never really comprehended the moral indignation and outrage of the conservatives that their denomination was being portrayed as pro-choice. Being pro-choice themselves, they just didn’t get it. And I think that emotion was one of the factors that fueled people to come to the convention and to vote for pro-life, inerrantist candidates.

“Please understand me, the ‘sine qua non’ for the Conservative Resurgence was the battle over the Bible, but one of the most emotional issues about the Bible and what the Bible said was what the Bible said about abortion,” said Land, president of the Southern Baptist Ethics & Religious Liberty Commission (ERLC).

Sutton said, “I suspect that had there not been a Roe v. Wade  there may not have been a Conservative Resurgence.

The conservative pastors “said Southern Baptists as a whole don’t believe that taking the life of an unborn child is morally acceptable,” said Sutton, a longtime pastor and now vice president of academic development and dean of the faculty at Midwestern Seminary in Kansas City, Mo. “What I’m saying is all of this worked in concert together.”

Supporters of the Conservative Resurgence achieved their goals in the years that followed—including the 1988 selection of pro-lifer Land as head of the convention’s ethics entity, then called the Christian Life Commission (CLC) and now the ERLC. During those years, Southern Baptists became known as committed participants in the pro-life movement.

The Southern Baptist Convention is “the most consistently pro-life, major religious denomination in terms of its rank and file, because only about half of people who identify as Catholics agree with the church’s position on abortion,” Land said. “If you ask people who identify as Southern Baptists, it’s somewhere between 80 and 90 percent who are opposed to abortion on demand . . . . An overwhelming percentage of Southern Baptists are opposed to most of the abortions that take place and think they should be illegal.”

Four decades ago, however, Southern Baptists were ill-prepared for the 1973 Roe and Doe rulings and the abortion regime they established.

“Our pastors had not preached on it. People had not talked about it for the most part,” said Sutton, who was a political science major at the University of South Alabama in 1973. “I probably represented the vast majority of Southern Baptists who were for the most part in the dark about the issues being raised.”

Based on his personal experience and research, Sutton said, “From what I could tell, most Southern Baptists had not really understood what was transpiring. You know, they knew there was talk about abortion. Most people I knew just thought abortion was murder. You didn’t kill unborn babies. But nobody knew the legal ramifications. They had no idea about the substance of Roe v. Wade  or Doe v. Bolton.

“Everything that I could tell is that Southern Baptists as a whole were pro-life. They had just never articulated it,” he said.

As a student in 1969-72 at New Orleans Seminary, Land said “misinformation and a reluctance to talk about the issue” marked even many of his fellow students.

“I found a disturbing number (of other seminary students) to be pro-choice, even conservatives,” Land said. “A lot of them tended to see it as a Catholic issue. And they had bought into this idea that life begins when the baby breathes.”

Land said he “was able to convince a lot of people that this was a human being, this was a baby that deserved protection” as he talked to them about the physiology of the unborn child. Nearly two years before Roe, however, the SBC already was on record in support of abortion for reasons nearly as expansive as those the high court permitted in its 1973 decisions. While grass-roots Southern Baptists were poorly prepared, the CLC and its executive director, Foy Valentine, were not.

At the 1971 SBC annual meeting, messengers approved a resolution—with Valentine’s backing, Sutton said—that urged Southern Baptists to promote legislation that would permit abortion in cases such as “rape, incest, clear evidence of severe fetal deformity, and carefully ascertained evidence of the likelihood of damage to the emotional, mental, and physical health of the mother.”

Shortly after the 20th anniversary of Roe and Doe, Timothy George described the SBC’s ‘71 resolution as essentially “a strong call for the liberalizing and legalizing of abortion in this country.”

“Two years prior to the Supreme Court decision of 1973, which opened the floodgates to abortion on demand in the United States, the Southern Baptist Convention was on record advocating the decriminalization of abortion and extending the discretion of this decision into the realm of personal, privatized choice,” said George, dean of Beeson Divinity School at Samford University in Birmingham, Ala. “The simple fact is that Roe v. Wade did little more than place a stamp of approval on what America’s largest, most conservative Protestant denomination had already agreed to.”

Valentine continued to promote abortion rights. In 1977, he joined four Southern Baptist seminary professors in endorsing a document by the then-named Religious Coalition for Abortion Rights that affirmed Roe and government funding of abortions.

Southern Baptists increasingly learned about the CLC’s position and moved into the pro-life camp as the ‘70s passed.

“The real shift among Southern Baptists and other evangelicals was between ‘76 and ‘80, not between ‘73 and ‘76,” said Land, who returned to the United States in 1975 after three years of doctoral studies in England. “And I think it was outrage over the numbers, the sheer slaughter of millions of babies, that shocked people into looking at this issue in a different way and seeing that it was a profoundly moral issue that we had to deal with.”

“To find out Southern Baptist people were giving their tithes and offerings to the Cooperative Program, which was supporting among other institutions . . . the Christian Life Commission, and then they were using the money that we gave to them to further a pro-abortion posture, this became a great source of tension,” Sutton said.

SBC messengers finally adopted the first of several pro-life resolutions in 1980. That resolution—introduced by Larry Lewis, who later became president of the then Home Mission Board (now North American Mission Board)—called for legislation or a constitutional amendment to ban abortion except to save the life of the mother. In 1984, Southern Baptists for Life was started outside the SBC bureaucracy to advance the pro-life cause in the face of opposition at the institutional level. The organization helped place a Sanctity of Human Life Sunday on the denominational calendar each January.

Land’s 1988 election by a CLC trustee board controlled by conservatives helped further a transformation that proved complete at the national level in the 1990s, when the denominational leadership uniformly became pro-life. The SBC “was still pro-choice at the institutional level and was seen so by the Supreme Court and others until I came to the commission,” Land said. “They were listing the Southern Baptist Convention as a pro-choice organization.”

In 2003, SBC messengers passed a resolution regarding Roe five months after its 30th anniversary. In the measure, messengers said, “We lament and renounce statements and actions by previous Conventions and previous denominational leadership that offered support to the abortion culture.”

Sutton pointed to two “defining moments” in the ascendancy of the pro-life cause in the SBC: (1) The approval of Lewis’ pro-life resolution at the 1980 meeting, and (2) Land’s election at the CLC.

Land will retire in October upon the completion of 25 years as head of the convention’s ethics entity. He gave the following assessment of Southern Baptists as legalized abortion’s 40th anniversary and his retirement near.

“I feel good that Southern Baptists are the most pro-life denomination of any size in the country,” Land said, “but I don’t feel good in the sense that I think we should always be doing more to help people understand the pro-life issue and how it relates not only to abortion, but also to euthanasia and end-of-life issues, which, of course, are going to become a more and more compelling issue in the immediate decades ahead.

“I won’t feel ‘good’—in the sense of good with quotation marks around it—until every Southern Baptist is pro-life,” he said, “and honors the Baptist Faith and Message commitment to defend ‘the sanctity of all human life from conception to natural death.’”