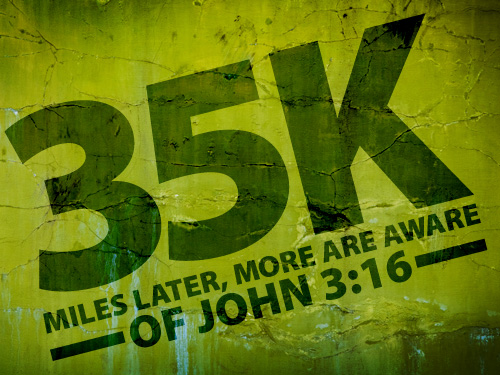 When Tim Gentry drove away from last year’s annual meeting in Shawnee, he knew he had a busy year ahead of him.

Gentry, evangelism group leader for the Baptist General Convention of Oklahoma, had plans to visit every association in the state on a MY316 Road Trip. Purpose of the trip was to promote the MY316 evangelism resources, celebrate ministry evangelism projects around the state and introduce himself to Oklahoma Baptists.

So behind the wheel of the Chevy Impala, which is wrapped in a plastic film (as are most current NASCAR race cars) with the MY316 logo, Gentry headed out to highlight evangelism ministries in every association.

As the car pulls into Moore, First for this year’s annual meeting, Gentry has accomplished his goal of supporting hundreds of churches, ministers and ministries across Oklahoma, and added more than 35,000 miles to the car’s odometer.

Shortly after last year’s convention, as Gentry was on his way to the Post Office, he noticed MY316 signs in the yard of Dale Hampton, a member of Oklahoma City, Springdale.

“Hampton is living out his faith each day, looking for opportunities to pray, share and serve his neighbors,” said Gentry.

While Gentry and his wife were in Dallas in December for the Big 12 Championship football game, they visited First Church and pastor Robert Jeffress, who was to be a speaker at the State Evangelism Conference, another ministry the car was promoting.

Also in December, Gentry met with Baptist Collegiate Ministry directors at their winter retreat in Norman. The MY316 car made numerous pit stops at BCMs to aid in ministry evangelism and community service ministries.

After singing along with the congregation at Moore, Philippine International Church, Gentry listened to “Sister Edna” give her children’s message of 1 John 3:16, the theme of the State Evangelism Conference.

“The multi-ethnic congregation of Filipino, Anglo and African-American believers is living out the serving theme of the SEC each day,” said Gentry.

At Oklahoma City, Crown Heights, the congregation lit Christmas bulbs every time members shared their personal MY316 story. During the church’s workshop on writing out a personal story, Susan Short, a children’s worker, realized she did not have a personal story about Jesus Christ to write, and prayed to receive Jesus during the MY316 training and was baptized. Also, a young lady came up to Gentry and shared how she had found Jesus the week before in the county jail.

In using John 3:16, Gentry said we can talk about God’s love, about believing and eternal life.

“It looks like the local body of Christ that God has given us and commanded us to be a part of,” said Gentry. “For all the sharing we do of our story and John 3:16, ultimately, we want to connect new believers with a local church so they can develop into fully devoted followers of Jesus Christ.”

At Noble, First, the staff has a plan for using MY316 throughout the church, starting with children and then allowing the awareness, excitement and results of this tool to spread to the youth and adults.

“After I shared a challenge with the entire congregation, I had the opportunity to witness several children’s workers teach the first week of the five-week MY316 Sunday School lessons,” related Gentry.

God’s Country Cowboy Church in Talihina meets in a former feed store. Since the church started in September 2010, more than 50 people have made professions of faith or rededications.

“I had the privilege of sowing some seed as approximately 60 people gathered to sing, hear testimonies and listen to the message,” said Gentry. “It was exciting to see how several churches are working together to start this church.”

The MY316 car joined an annual AWANA Grand Prix at Oklahoma City, Putnam City in March.

At Mannsville, First, the youth used pantomime to communicate John 3:16 during a youth evangelism training event.

“The students used elements of sign language, facial expressions and body movements—think death, burial and resurrection—to express John 3:16,” said Gentry. “Several of the students took extra Spanish MY316 tracts for sharing at school and a future mission trip to Mexico.”

Gentry said Ralph Hamblin, deacon at Oklahoma City, Glorieta, has been using the MY316 evangelism resource at a new mission work in Apache. Starting last summer as a home Bible study, the mission now has more than 20 people attending.

The next stop for the MY316 car was the North Canadian Association Making Right Choices youth rally, with more than 1,000 students and 100 decisions to follow Christ.

Approximately 1,000 people gathered at the Claremore Expo Center to support 266 children and youth who participated in the Roundup for Jesus Jr. Rodeo. Through personal sharing, and horse whisperer Lew Sterrett’s presentation, 15 people prayed to receive Christ.

More than 1,000 attended Tahlequah’s block party, along with the MY316 car, where 10 people professed their faith in Christ.

During two nights of the Roundup for Jesus Rodeo, sponsored by Tillman Association 214 professions of faith were recorded.

Les Banks, director of missions, noticed a man looking over the MY316 car during the rodeo. He struck up a conversation with the man, and after a gospel conversation, the man prayed to receive Christ.

The MY316 Road Trip broke out of Oklahoma to participate in Crossover during the Southern Baptist Convention meeting in Phoenix, Ariz., where hundreds of professions of faith were recorded.

The BGCO evangelism group provided funds to assist with three team rodeo events this year at Red River Valley Cowboy Church in Albany. The MY316 car visited the team roping competitions, where pastor George Toma shared the Gospel with some 150 people who entered the roping contest.

The MY316 car was also a presence at several Vacation Bible Schools across the state, including Comanche, First, where racing decorations covered the auditorium; and Moore, Highland, with the theme of Highway 2 Heaven. Twelve accepted Jesus there when Gentry shared his MY316 story of yielding to Christ as a 7-year-old boy.

At a stop in Waurika, Gentry visited with Bob Waitman, pastor of Cross Brand Cowboy Church. The church, which meets at Jefferson County Fair Grounds, is averaging 140 people in Sunday morning worship.

The MY316 car made many other stops on its journey across Oklahoma, including the youth weeks at Falls Creek, Indian Falls Creek, Youth Evangelism Conference, Sweet Saturday and the State Men’s “Rewired” Retreat.

“I praise God for people willing to tell their story and John 3:16 across the street and around the world,” said Gentry. “I also thank the Lord for Oklahoma Baptists who pray, give and go to fulfill the Great Commission.

“Is there anyone you can have a conversation with this week about the transforming power of the Gospel?”

MY316 resources are provided to Oklahoma Baptist churches at no cost as they have been produced with funds from the Cooperative Program and Edna McMillan State Mission Offering.  Your church can receive MY316 training materials, tracts and books for new believers by calling Erin Clark at 405/942-3000, ext. 4313. You can also go to www.my316.com for church resources, videos and much more.