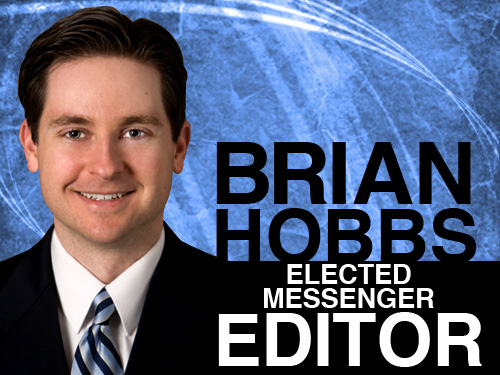 Brian Hobbs, director of communications for the Baptist General Convention of Oklahoma, has been elected editor of the Baptist Messenger by the Executive Committee acting on behalf of the Board of Directors.

With his added duties, Hobbs, 32, becomes the 11th editor of the Messenger, which is celebrating its Centennial in 2012.

“Brian has served us well over the last few months and proven his ability as a strategic leader in the area of communication,” said Anthony L. Jordan, BGCO executive director-treasurer, in announcing the move to Baptist Building employees Nov. 3. “He has been the person behind the move to offer a full version of the Baptist Messenger online.

“Brian will become one of the youngest editors in our history, as well as one of the youngest to lead a state paper. (Note: Porter Routh, who was Messenger editor from 1943-45, was also 32 when he assumed duties as editor.) Brian brings a unique understanding of communicating with the emerging generations, while respecting the more mature generation of Oklahoma Baptists. This comes from being a lifelong Oklahoma Baptist having been a part of the First Baptist Church of Bartlesville.

“Brian will be privileged to be the editor of the Messenger as we celebrate the Centennial year of the news journal for Oklahoma Baptists. I am confident he will lead us into the second century of telling the story of our cooperative work together with effectiveness and distinction.

“We give thanks to God for sending Brian to us. As editor, he joins a team of seasoned veterans of Baptist journalism, and as communications director, he will lead a team of young, skilled team members.  These individuals have, and will continue, to distinguish themselves as leaders and servants in their respective fields.”

Hobbs was raised in a Christian home, and at the age of 8, he prayed to receive Christ and was later baptized at Bartlesville, First.

“My parents were so key to my readiness to receive the Gospel. At the time of my salvation, I was reading the Chronicles of Narnia,” recalled Hobbs. “Seeing the sacrifice ‘Aslan’ had to make for ‘Edmund’ opened my understanding to what Christ did for me, for us all.”

Hobbs holds a bachelor  in business marketing from the University of Oklahoma and an MBA degree from Oklahoma City University. He worked for the Oklahoma Council of Public Affairs, a non-profit organization, in marketing and public relations from 2001-2007, and served as director of communications at Oklahoma City, Quail Springs, where he expanded the church’s print and online publications, established a social media strategy and managed the communications for two capital campaigns, before coming to the Convention.

Hobbs said he will try to strengthen the printed presence of the Messenger, while harnessing the latest technology to launch its new Messenger Digital and Messenger Mobile Apps, available this month.

“It was always a dream of mine to have an article published in the Messenger,” said Hobbs. “In fact, my wife  had a column published before I did. To step into this role as editor is a huge honor, and one that I take very seriously. I am grateful to Dr. Jordan for this opportunity to serve my fellow Baptists.

Hobbs and his wife, a stay-at-home mother who also works for her father’s technology company, are parents of three young children, Alice, 7, Evelyn, 5, and Martin, 2. They reside in Oklahoma City.

Hobbs succeeds Douglas E. Baker as editor of the Messenger. Baker served from Aug. 1 2009 until November 2010.

Scott Phillips, who is leader of the BGCO’s Church and Family Equipping Team, will also continue to maintain oversight as interim Communications Team Leader.