2019 Pastors’ Conference speakers give the charge to ‘see the people’ 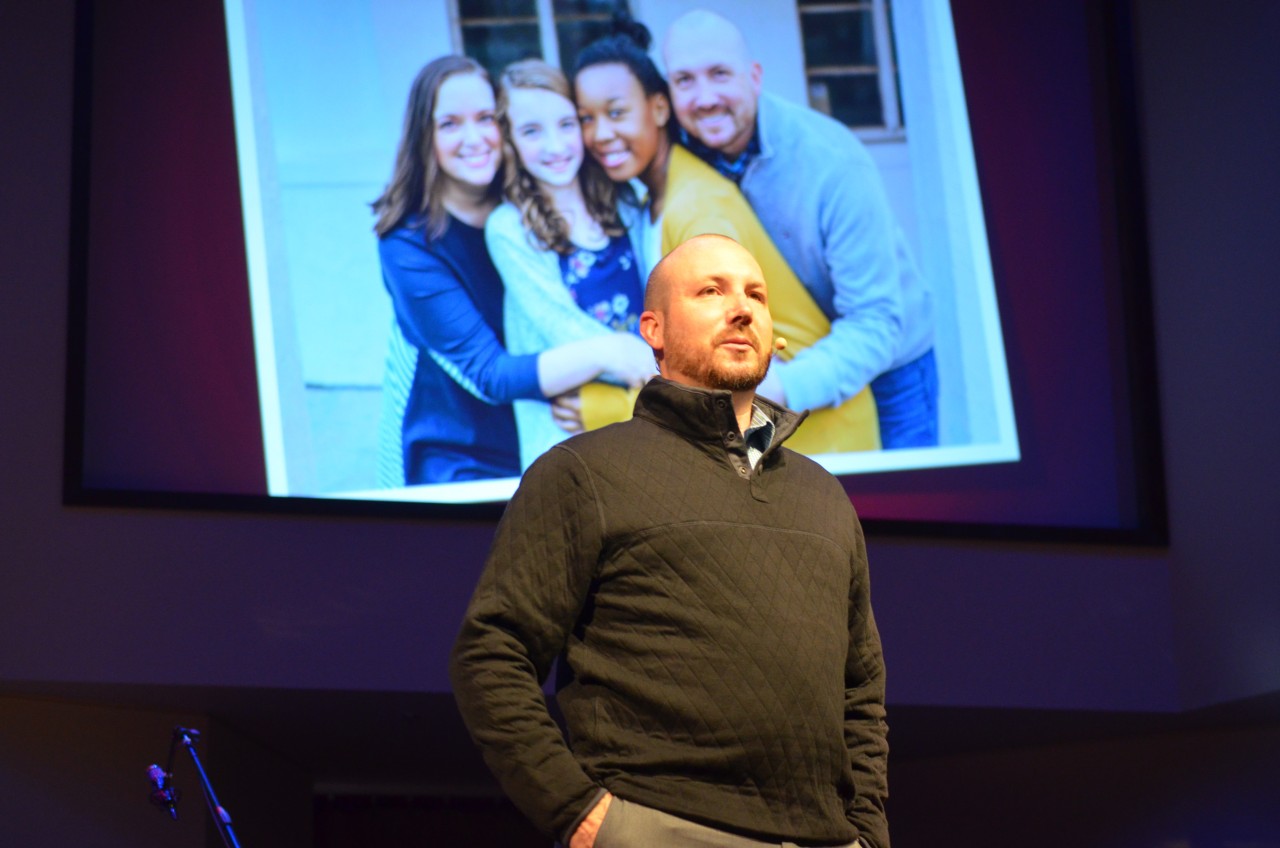 “See the people” was the theme of Oklahoma Baptists’ 2019 Pastors’ Conference, as the six speakers focused their messages on meeting needs and embracing brokenness. The Nov. 11 conference kicked off the Annual Meeting of Oklahoma Baptists, which met in the morning and the afternoon, at Oklahoma City, Quail Springs. 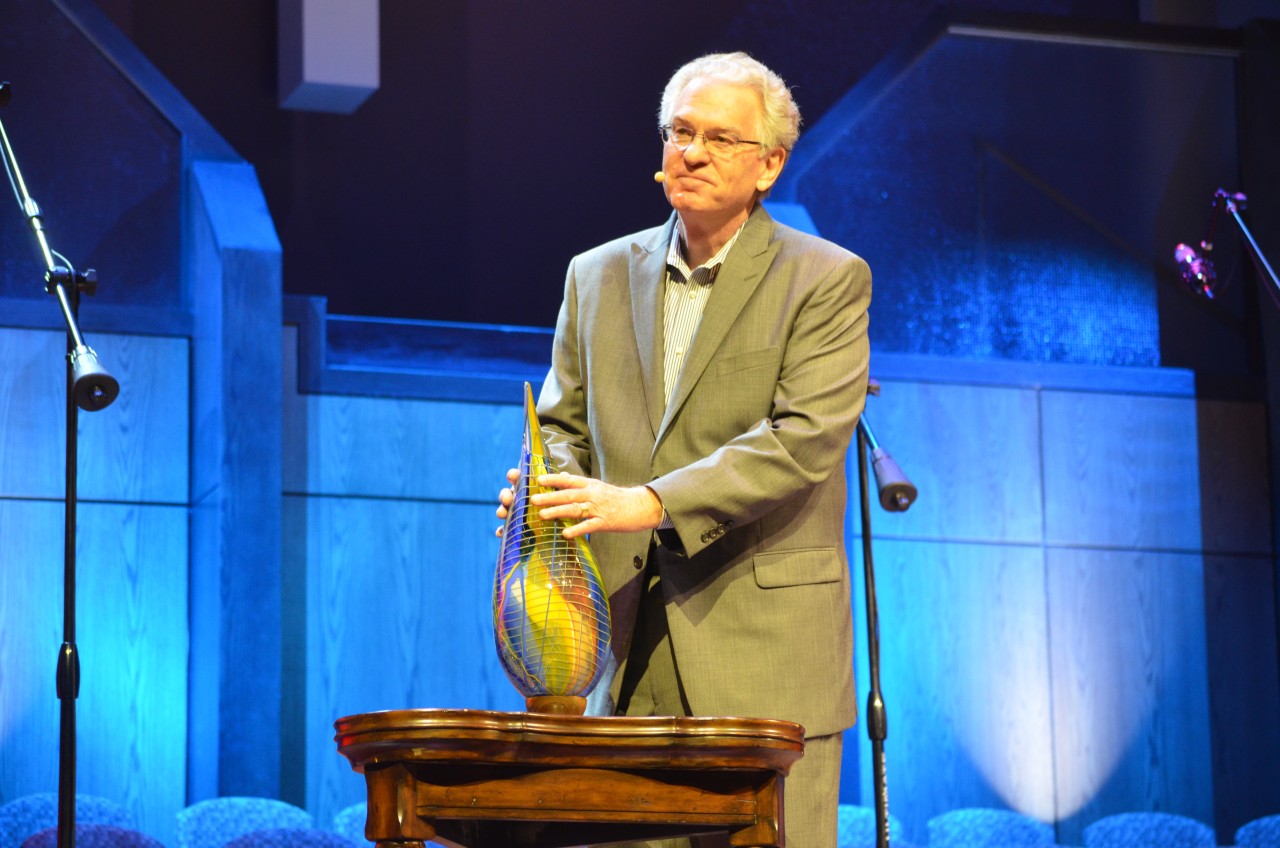 Anthony Jordan used a vase titled ‘Redeemed Elegance’ as an illustration for his sermon.

A familiar face opened the Pastors’ Conference. Anthony Jordan served 22 years as the executive director-treasurer for Oklahoma Baptists, retiring in 2018, and he challenged attendees to see people as Jesus did.

Preaching on Matt. 9:35-38, Jordan’s opening illustration involved a vase that was made from broken glass that was collected from houses and buildings in Moore that were affected by the 2013 Moore tornado. Jordan said the vase was named “Redeemed Elegance.”

“I am very thankful that Jesus is in the business of taking broken people and putting them back again,” Jordan said. “He wants us to pick up broken pieces and bring them to the Master and make them into a beautiful works of art.”

Craig Towery speaks with a photo of his family featured behind him.

Craig Towery, pastor of Sentinel, First, spoke on Lamentations 3 and shared how God is faithful in the midst of mental illness. Speaking transparently, Towery told how his wife Julie struggles with mental illness and what happened when he first shared openly with his church what they were experiencing.

“We didn’t know if they would hug us or fire us,” Towery said.

He reported that members of Sentinel, First responded with an impromptu prayer session for the Towerys and said, “Thank you for telling us this.” Some expressed they too deal with mental illness.

Marshall Williams concluded the opening session of the Pastors’ Conference. The longtime pastor of Philadelphia, Pa., Nazarene, continued the emphasis of seeing people in brokenness and having compassion, as Jesus did in Matt. 9:35-38. 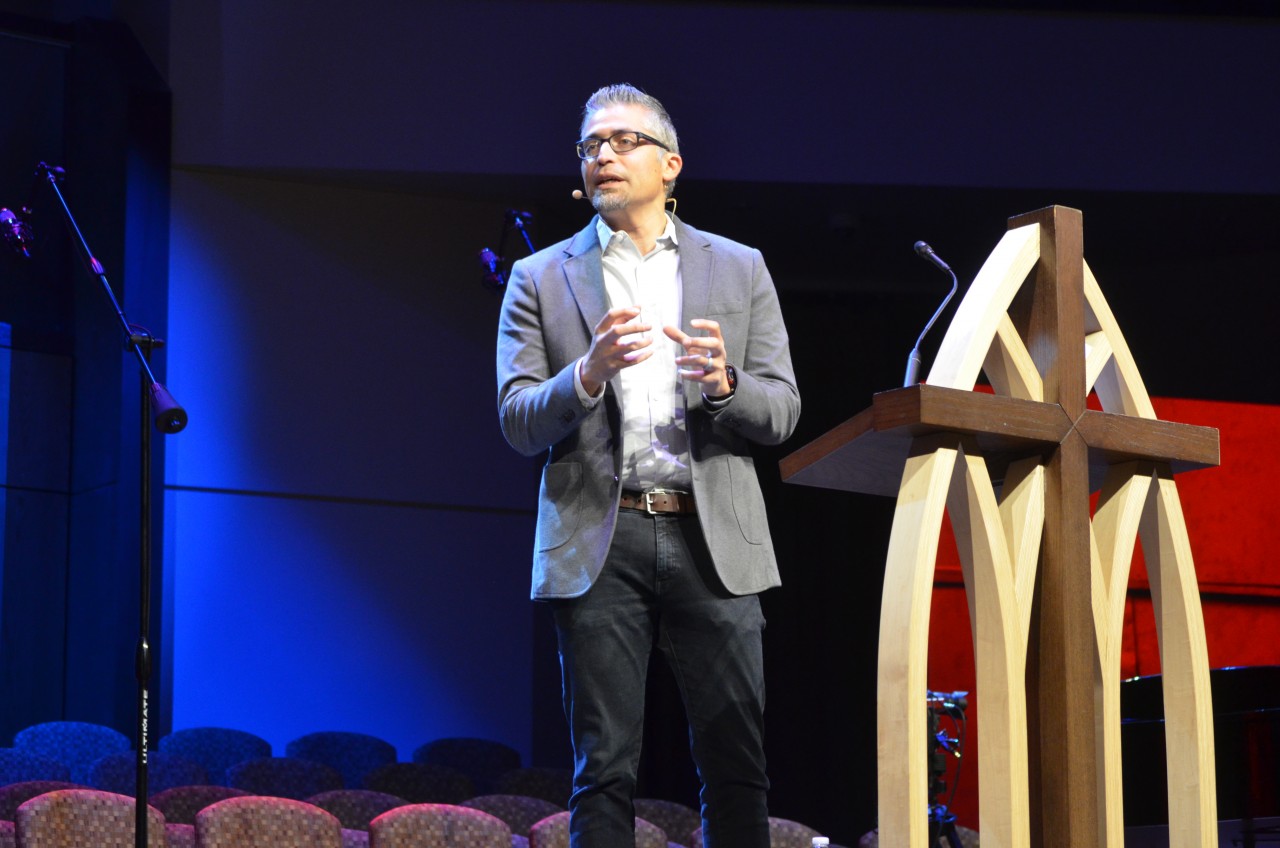 Williams gave the challenge to overcome hypocrisy in the church and be more available to people who are hurting.

Jason Paredes, pastor of Arlington, Texas, Fielder, used an unorthodox method to open his sermon, which started the afternoon session. He was sitting in the crowd as he began to speak, causing many to wonder where he was. Paredes used the moment of awkwardness to illustrate how some people feel invisible among the crowds and spoke on the “ministry of seeing.”

“It’s the ability not just to look at people but to see them,” Paredes said. He shared how Jesus applied the “ministry of seeing.” 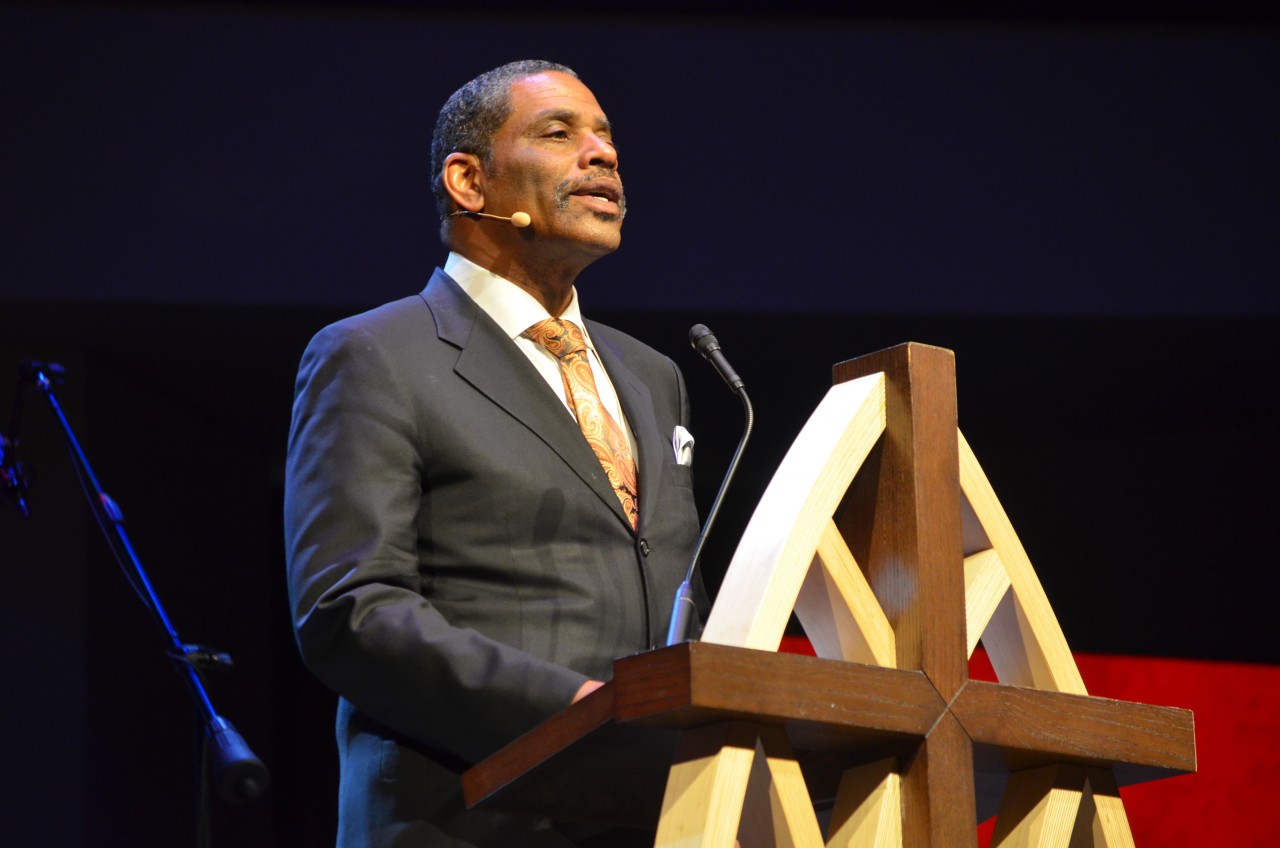 “Over and over and over, you see this concept again and again—Jesus saw,” he said. “No one else could see them, but Jesus saw them. He had a ministry of seeing… Jesus is looking out at these forgotten nobodies… They were broken people filled with sin, filled with issues and problems. When Jesus saw people, He saw potential, and He said, ‘They need to be in my Kingdom.’”

Dhati Lewis, pastor of Atlanta, Ga., Blueprint and North American Mission Board executive director of community restoration, was scheduled to speak at this year’s Pastors’ Conference, but due to a conflict, he was unable to attend. Nick Atyia, pastor of Seminole, First and first vice president of the Pastors’ Conference, pinched hit for Lewis and challenged attendees to “Be Not Afraid of Brokenness.”

Speaking from 1 John 2:15-17, Atyia gave clarity to what it means in this passage to “Love not the world.” 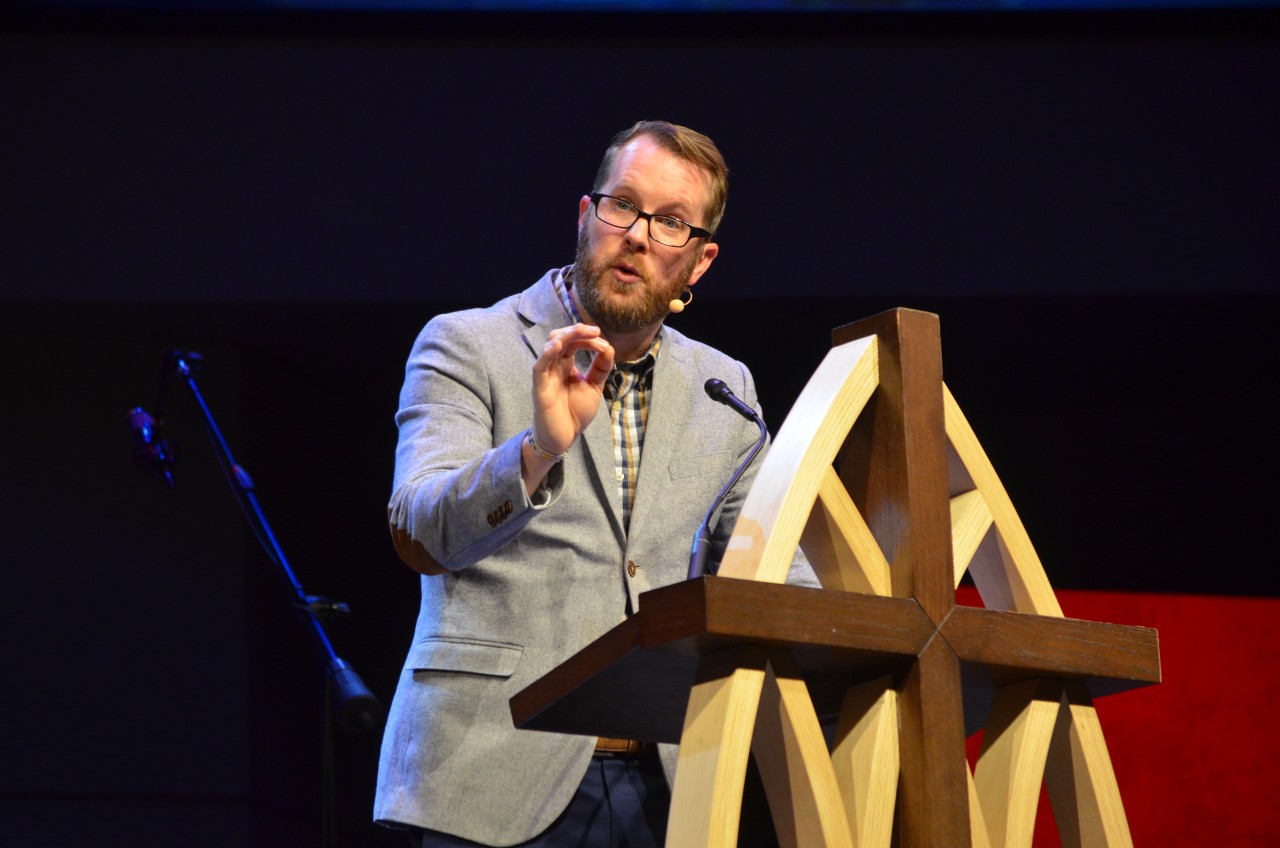 Nick Atyia spoke in place of Dhati Lewis who was unable to attend the Pastor’s Conference.

Stephen Rummage, pastor of Oklahoma City, Quail Springs, concluded the Pastors’ Conference with a message titled “Making Your Life Matter.” Speaking from 2 Tim. 4:6-8, Rummage shared several points from what is considered the Apostle Paul’s final address to Timothy before his death. 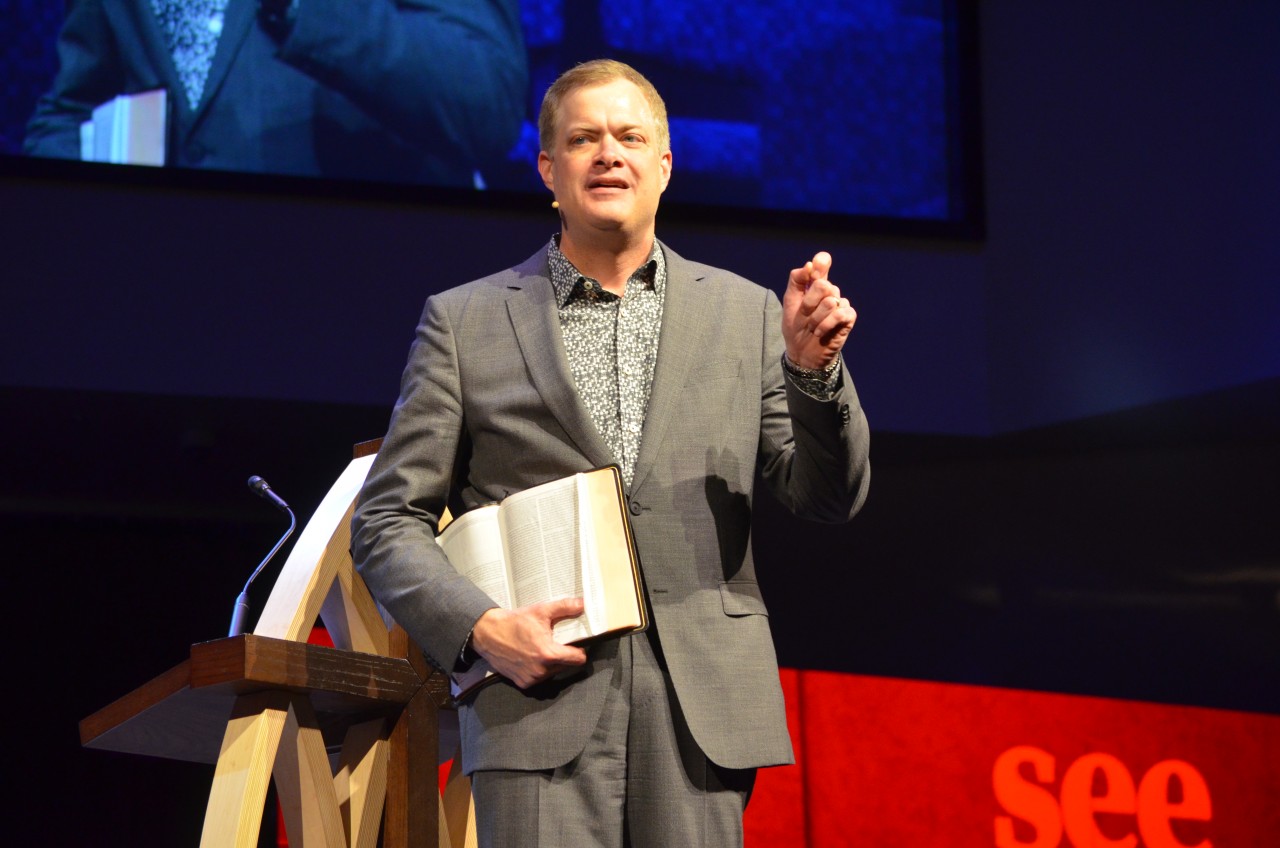 “If you were to look back over your life today,” Rummage asked, “would you be able to look back as Paul did and say ‘I’ve fought the good fight, I’ve finished the race, I’ve kept the faith’?… Can you tell God that you’ve stayed with it? That’s a life that matters.” 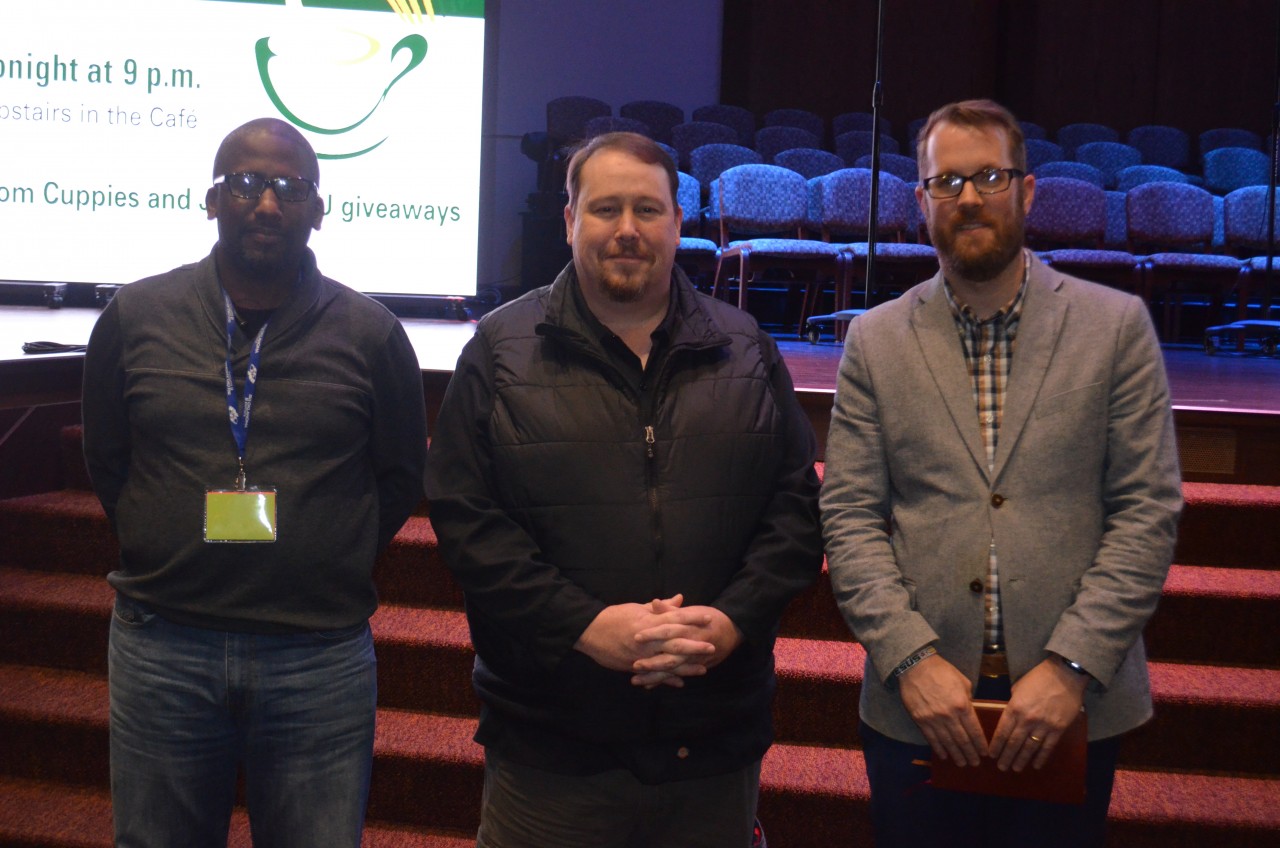