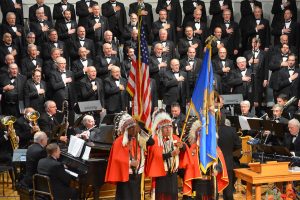 EDMOND—The 2018 annual meeting of the Baptist General Convention of Oklahoma (BGCO) featured many highlights, including the installation of Hance Dilbeck as the ninth executive director-treasurer in the state convention’s history.

More than 650 registered messengers, and many more guests, gathered at Edmond, First on Nov. 12-13 for the 112th annual meeting of the BGCO, which had the theme of “To Him be the Glory in the Church.”

Military veterans were honored, and the Singing Churchmen of Oklahoma led times of worship in the opening of the annual meeting’s first session. The Kiowa Black Leggings Society Honor Guard presented the colors, as the National Anthem was sung. The Churchmen also sang a medley of all the military service songs, as veterans stood when their branch of the military was acknowledged.

Hance Dilbeck’s installment as executive director-treasurer highlighted the first session. The former pastor of Oklahoma City, Quail Springs began serving in his leadership role in March 2018. The formal installment process was observed with a recommendation by Douglas Melton, pastor of Oklahoma City, Southern Hills, who was a member of the BGCO executive director-treasurer search committee. Messengers voted to approve Dilbeck for the role, which was followed by a charge given by Doug McClure, pastor of Hugo, First. 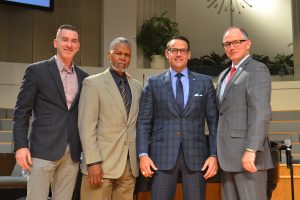 Dilbeck began his address thanking the many who have made it possible for him to begin serving as executive director-treasurer. He said it is an honor to serve Oklahoma Baptists and the Lord in this capacity.

“I want you to know that I love you, and that I am one of you, because I need to tell you the truth,” Dilbeck said. He reported that Oklahoma Baptist work is in decline, referencing all accounts, including church membership, attendance, baptisms and Cooperative Program giving.

“It pains me to admit that there are more lost people in Oklahoma now than there were 30 years ago, and there are fewer Baptists,” he said. “This is a reality that runs contrary to our mission.”

Dilbeck said this is not the time for Oklahoma Baptists to retreat, but he emphasized the call to advance the Gospel.

“We work to advance the Gospel of Jesus in our communities, our state and to the ends of the earth,” he said. “We share the Good News with our neighbors, and we send our sons and daughters to the nations with the Gospel.”

Dilbeck shared the history of the first meeting of Oklahoma Baptists, which happened 20 years before statehood, gathering in Tahlequah on June 1, 1883. He said they declared a threefold purpose.

“‘We will work together to train leaders, to strengthen our feeble churches and to get the Gospel to the destitute places of our Territory,’” Dilbeck read from an early report of the first meeting of Oklahoma Baptists. “Our forefathers understood that Gospel advance was their calling. They also declared that the Gospel Advance depends on healthy churches.”

Dilbeck admitted there is brokenness in Oklahoma, but he said Oklahoma Baptists must embrace brokenness as opportunity. “When people are utterly helpless and hopeless, broken beyond repair, they want to hear from Jesus,” he said. “God is opposed to the proud but gives grace to the humble.” 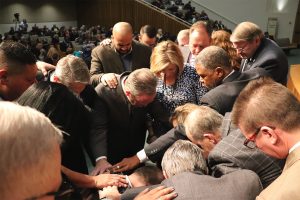 During Dilbeck’s installment as executive director-treasurer, Oklahoma Baptist leaders observe laying on of hands over Dilbeck and his wife Julie.
[Photo: Brian Hobbs]

“We will think about our work, our mission, our field,” he said. “We will dream about the future and imagine our most essential tasks and most productive strategies. We will order our priorities… We will ask because we confess that unless the Lord builds the house they labor in vain who build it. We will ask because we believe our Father knows how to give good gifts to those who ask.”

Dilbeck concluded with a thought of the future.

“One day, years from now, our grandchildren might learn about a great season of Gospel advance that began in Oklahoma in our generation… If they inquire of us, ‘How did this great Gospel advance come to pass?’ Wouldn’t it put a smile on your face to give them a simple answer, ‘…We asked Him, and He is able.’” 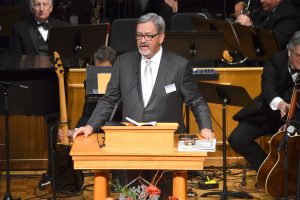 Joe Ligon, pastor of Marlow, First, gave his final address as BGCO president. Opening with the story of the Three Little Pigs, Ligon shared how important it is for churches to be strong in difficult times.

“What I see is that the church is supposed to rest on Jesus,” Ligon said. “And somehow, someway, sometime, pastor, let us learn to take the burdens that we carry and offload those, and say to Jesus, ‘It is Your church! Jesus, I have to have you carry these burdens because I can’t carry them!”

Keith Wigninton, pastor of Claremore, First, ended the Annual Meeting by delivering the annual sermon. He preached from Acts 20 of Paul giving a farewell address and gave characteristics of a “glory giver.”

“Friends, what you start in faith, finish in faith. It brings glory to God,” Wiginton said. “Be faithful. That’s how we give God glory in the church.” 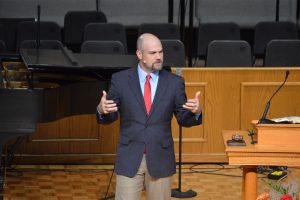 Resolutions and other business

Seven resolutions were approved by messengers at the 2018 Annual Meeting. The resolutions covered topics including appreciating the host church, Edmond, First; praying for the BGCO executive director-treasurer; emphasizing foster care and adoption needs in Oklahoma; calling for Christian civility in a hostile culture; addressing sexual integrity and accountability; opposing recreational marijuana and drug abuse; and expressing gratitude for pastors and ministers of the Gospel.

During the miscellaneous business segment of the final session, Bill Barnett, pastor of Seminole, Indian Nations, made a motion that Dilbeck and BGCO leaders find an appropriate month to honor ministry wives. The motion passed. 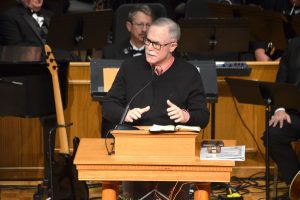 Brian Hobbs, editor of the Baptist Messenger, spoke in a video presentation of the new format the publication will observe in 2019, printing twice a month instead of weekly. He also said BGCO-affiliated churches will receive print publications at no subscription costs, beginning in 2019.

Messengers also approved the 2019 BGCO Financial Plan with the Cooperative Program objective of $25.5 million be distributed 60 percent to BGCO efforts and 40 percent to the Southern Baptist Convention.

To watch the 2018 Annual Meeting online, go to www.bgco.org/annualmeeting.