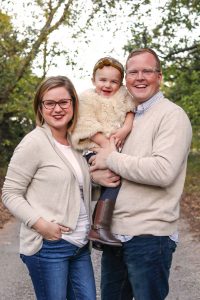 MUSTANG—Mustang, The Well, now in their second year as a church plant with the Baptist General Convention of Oklahoma, is currently meeting at Canyon Ridge Intermediate School in the Mustang School district. From a church planting perspective, the church is doing well. The congregation is averaging approximately 100 in weekly attendance, recently baptizing three new believers.

Beyond church growth, the planters have also worked to cultivate a culture within the church that is conducive to foster care and adoption.

“Our goal is to make much of Jesus in our city and beyond by making disciples who are satisfied in Him. Foster care and adoption fit into our goal because adoption is Gospel language,” church planter and lead pastor Stephen Myers explained. “Choosing to love children who don’t have a home and bringing them into your home points to the reality of what God has done for us through His Son Jesus.”

Through the church plant, Myers and Steven Giblet, pastor of care and discipleship, are disciple makers leading by example. Myers and his wife Jonna have adopted a daughter named Lydia. Giblet and his wife Jessica have fostered many children, eventually adopting Demetri.

Myers explained, “When Jonna and I married, the plan was to wait a couple of years and then start a family. Typical stuff. From the beginning, adopting a child was one of the ways we wanted to grow our family. We just didn’t realize that it would be the only way for us to grow our family,” Myers continued, “Jonna and I found out, a couple years into our marriage, that we probably wouldn’t be able to have biological children. Anyone who has ever received that news knows that it is a devastating blow to your identity and the dreams you have for your future.

“We started by pursuing foster care with the goal of adoption. We became DHS certified but learned, after months of waiting, that the chances of adopting a newborn were very slim. We are foster care advocates, but at the time, we longed to have a newborn baby.”

Despite this, the couple soon was matched to adopt a little boy in 2016. The elated couple prepared for the arrival of their new son. They arrived at a hotel near the hospital, ready to take him home, only to learn the birthmother decided to keep the baby. 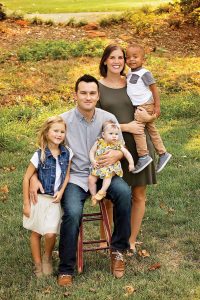 Steven Giblet, BGCO church plant pastor, pictured with his wife, Jessica, and their three children, one of whom was adopted into their family.
[Photo provided]

“A couple of weeks later, we got another phone call saying we were selected by a new birth mother who was going to have a little girl,” Myers said. “When Lydia came into our lives, we gained perspective. Though painful, the years of trying and failing to get pregnant and the failed adoption we experienced, were all a part of God’s sovereign plan for our family. If we were able to have children biologically and if we were able to adopt that little boy, we wouldn’t have Lydia Faith. Grace, grace, God’s grace,” Myers said.

Giblet shared his family’s story. “Jessica and I felt the call of the Holy Spirit drawing us into foster care/adoption after a foster care/adoption Sunday at our church, Weatherford, First,” he said. “Soon afterward we became certified, and our first foster care children came to our home. It was a sibling group. A brother and a sister, ages 4 and 2. They were physically and emotionally neglected. They came to our house with a few belongings in a Wal-Mart sack and needing a bath. They were only with us a short time before they moved on to a home that was excitedly ready to adopt them. That was in 2014. There is rarely a day I don’t think about those two precious babies,” he said.

The couple continued fostering other children that have since moved on to live with other families. Giblet continued, “Then in November of 2015, a skinny, crazy-haired little boy named Demetri came into our home at three in the morning. This began a slow, hard process that left us heartbroken on multiple occasions, as he would go back to his mother, only to return to us a few short months later.

“Jessica and I prayed often for Demtri’s mother. We never prayed for her to fail, even though we desperately wanted Demetri back in our home. But we prayed a very specific prayer, and it was in August of 2017 that Demetri’s mother called and repeated my private prayer back to me almost word for word and told us that she loved her son dearly, but she knew we did too, and she wanted to relinquish her rights and for us to adopt him! This was not expected. It is a sacrifice and gift that my wife and I can never repay to her. On December 1, 2017, Demetri became fully and wholly our son.”

For more information about how to implement a culture of foster care and adoption in your church, visit www.bgco.org/foster.