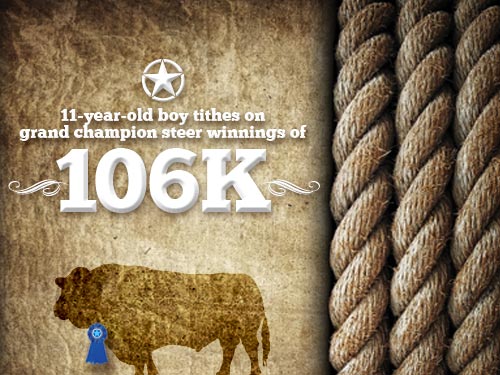 If we didn’t stop him, he’d give away all the money he has,” said Stacey Bonham of her 11-year-old son, Baylor.

And that would be a significant amount, since Baylor recently deposited $106,000 to his bank account.

The young member of Newcastle, First, who won the sum by showing a prize steer, is tithing on that money to his church.

Born into the cattle industry, Baylor has been in the “show” business since he was about 5.

“Both of our sons, Logan, now 18, and Baylor started showing as soon as they could pull a steer by a halter,” said Stacey.

Baylor recently showed the Grand Champion Market Steer at the National Western Life stock Show in Denver, and 24 hours later, the 1,315-pound steer brought the $106,000 amount on the auction floor.

Baylor, who weighs 80 pounds, was in the auction ring with “Stripe,” and when the amount hit $70,000, the audience rose in applause, frightening Stripe, who  jerked and sent Baylor flying into the metal bar on the sale ring. But being the professional he is, Baylor jumped right up and returned to center ring to complete the auction, which reached $100,000 before the auctioneer encouraged the $106,000 amount to commemorate the 106 years of the National Western Stock Show.”

When Baylor was interviewed after the auction, he said to a cheering crowd, “I came here to show and see what it was like so I could come back and show again next year, but it just worked out for me.”

His father, Steve, an astute businessman, choked up when he came to the microphone, and was upset, Stacey said, because he showed so much emotion in public.

“I told him he just showed people that he has a heart, and is a dad, not just a businessman,” Stacey revealed. “It was an amazing, memorable moment.”

Steve has been in the cattle industry since he was a teenager, and is a professional licensed auctioneer. He buys and sells show cattle nationwide, and hand selects them because he can tell if they are built right, have the correct structure and are going to walk great, all of which are necessary for show.

“I knew the first time I saw him, Stripe would be perfect on all four feet,” said Steve.

Stacey said the boys spend about two hours a day caring for the steers, brushing, rinsing and blow drying their hair and feeding them a structured diet that promotes muscle to bone ratio.

“We buy pick-up beds of shampoo from Sally Beauty Supply,” said Stacey. “The hair has to be long, fluffy and healthy. People can’t get over how much hair Stripe had and how soft it was.”

Fans of Stripe were able to see that soft hair “up close and personal” as the steer participated in a long-standing tradition at the elegant Brown Derby Hotel in downtown Denver shortly before the auction.

Every year, the grand champion steer is paraded through the hotel lobby, on red carpet accompanied by music from a grand piano, to a makeshift pen, where people can have their pictures taken with the prize winner.

Stacey said Logan and Baylor average four to six head of cattle they work with each year. With the stock shows from October-January, they end up losing three of those. There are two major shows in Oklahoma—the Tulsa State Fair in October and the Oklahoma Youth Expo, the biggest show in the state in March at the Oklahoma City Fairgrounds. Only Oklahoma 4-H and FFA members are eligible for these shows.

The first time Baylor won significant money was last November at a national show in Louisville, Ky., where he garnered $27,000.

When he was interviewed in the ring after the sale, he told reporters he was going to save some of the money for college, but he was going to give part of it to the children’s ministry at his church.

“That was totally off the cuff,” recalled Stacey. “I had no idea it was coming. It took me to tears.”

When the family returned from Kentucky, Stacey took Baylor to visit with Newcastle, First’s children’s minister Ronda Pinkerton. Baylor, who was saved and baptized at Newcastle, First when he was 8, told her he would like his tithe money to be used to help kids who aren’t able to go to summer camp because they can’t afford it, and also to be used for fees for Upward Basketball and for tennis shoes for those who needed them.

Stacey said, although Baylor won the money in Kentucky in November, they didn’t receive the check until the first week in February. She also noted that all shows keep a portion of the money for scholarships, butchering fees and other expenses. She said they have been told they will probably receive 90 percent of the money from the Denver show, but it likely will be around 75-80 percent.

“This time, Baylor and the rest of the family want the money to be used where it is most needed,” said Stacey. “We are getting ready to go into phase III of upgrading the church facilities, so we are going to see if they would rather put the money from his second win into the building program.”

Stacey noted that since Baylor is only 11, she assumes he will have a long career and will frequently have winnings to tithe on to his church.

“Baylor has been so often in the limelight that his intentions with his winnings have become public knowledge, and I think that is a good witness to other kids,” she said. “He has the biggest heart you’ve ever seen. I promise you Baylor would give every dime of it away if you let him.”

Stacey added that God has blessed through the whole ordeal.

“Sometimes I have guilt that things have gone so well.”