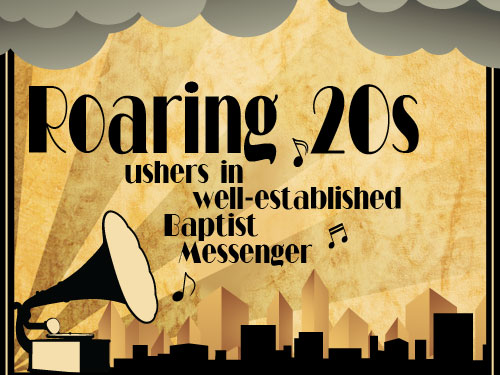 As the decade of the 1920s began, the Baptist Messenger had firmly established itself as the official publication of the Baptist General Convention of Oklahoma.

The eight-year-old paper had morphed into more of a denominational paper with fewer subjects involving topics other than spiritual or religious. Most of the advertising was for church and denominational goods, including many for books, Bibles and hymnals, as well as for programs and entities of the state and Southern Baptist Conventions, although there were still numerous ads for tonics and medications.

It was a decade of utmost importance to the history of Southern Baptists—the adoption of both the first Baptist Faith and Message and the Cooperative Program. Both subjects were the emphasis of many of Editor C.P. Stealey’s columns.

Both the CP, referred to earlier by Stealey as both The Program and the 1925 Program, and the Baptist Faith and Message were adopted by messengers to the Southern Baptist Convention meeting in Memphis.

However, Stealey refused to sign the majority report on the statement of the Baptist Faith and Message. That and his editorial on evolution got him in hot water with some Baptists.

But Baptist pastors in Oklahoma City adopted a resolution in support of the editor endorsing “his contention and attitude in the SBC as well as his brave and lucid defense of the faith in the columns of the Baptist Messenger.”

He was also given a vote of confidence during the 1925 state convention, when it was noted that “no man could be found who would say all of the time what everybody would want him to say. But during his 14 years as editor, the cooperation on the part of many has been fine and the past year the best of all, the normal list of subscribers better than ever, financing the paper less difficult and a balance of over $1,300 in the treasury.”

There was a contest in 1925 between the Oklahoma Methodist and the Baptist Messenger for renewals and new subscriptions to their papers. A rate of $2 was charged by both papers for a yearly subscription, and $1.50 for churches placing the paper in homes of all its members. The contest ran from March 1-May 5. Each renewal or new subscription counted for one point. The Methodists ended up with 919 points and the Baptists came in with 1,079 points, although a day later, the Messenger claimed 1,136 points.

“The contest was conducted in a pleasant and agreeable manner, and resulted in much good we trust,” said Messenger Editor Stealey.

Later in the year, a campaign was conducted to increase subscriptions. The plan targeted the W.M.U., Sunday School superintendents and teachers, B.Y.P.U. (Baptist Young People’s Union) presidents and officers and deacons.

“We are counting on the women of the W.M.U. to back us to the limit. We appreciate the fact that they require a certain percentage of readers in the Standard of Excellence, and we are hoping they will all want to be A-1 Standard.

“Sunday School superintendents and teachers should be our hearty supporters in this campaign. Take a poll and see how many are taking the paper and urge a 100 percent record.

“Our young people have always stood for the Messenger. We are wondering how many of those enlisted in the Training Department are readers.

“Strange to say we presume there are several deacons in the state who do not read the Messenger, and we venture that they are not serving quite so well as they could if they would do their duty in this respect.”

July 31, 1927 was Messenger One Dollar Day—“the first gun fired in the increased circulation campaign.” New subscribers received the paper for $1 for eight months.

Although Stealey continued as editor through 1927, his tenure was not without controversy, which it was said, he thrived on.

He used the pages of the Messenger to fan the fires of conflict over evolution, denominational policies and programs and personalities, but it was probably the issues of fundamentalism and evolution that resulted in Stealey’s removal as editor by the BGCO board of directors by a 13-7 vote Dec. 13, 1927.

Upon the vote of the board for his dismissal, Stealey said, “They have decapitated me, but they have set me free. I am happy and will go on and continue my fight for fundamentalism.”

In his first editorial, Routh, who was editor of the Texas Baptist Standard from 1914-28, told subscribers: “Our task is the strengthening of the sense of stewardship, the enlistment of our forces and the development of our spiritual resources. We are able to possess the land which the Lord God of our fathers hath given us. Already we have made a good beginning in our one great school, Oklahoma Baptist University; in our two hospitals at Muskogee and Miami; in our Orphanage at Oklahoma City; in our assembly at Falls Creek; and in our state paper, the Baptist Messenger.”

When Routh came to his new post, he found a subscription list of 6,000 names, but only 2,500 of them were paid up, so his first duty was to get the paper on a firm financial footing. He worked out an arrangement with OBU to print the paper in Shawnee, but maintained the editorial offices at the three-story Baptist Building, which was located at 223 N.W. First St. in downtown Oklahoma City.

Politically, Warren G. Harding was elected president and Calvin Coolidge vice president on Nov. 2, 1920. The automobile had become a part of American life. By 1923, about 15 million cars were registered, and one of every four U.S. families bought or sold an automobile every year.