‘Music took me out; God brought me back’ 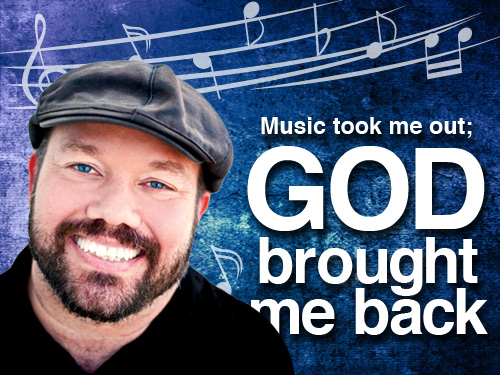 Ernie Tullis worked hard and graduated from high school at age 16 so he could get out of the “The Flats,” the Oklahoma City neighborhood where he grew up.

Little did he know that in less than 30 years, he would be back in that neighborhood and loving every minute of it.

“Music was my way out of the neighborhood,” said Tullis.

The talented musician, who plays drums, keyboard, bass and guitar, traveled for 15 years with such noted personalities as Vince Gill, Toby Keith, Point of Grace and Michael W. Smith, performing all across the United States as well as overseas.

But with the constant travel, his marriage to his childhood sweetheart gradually began to unravel.
“It was taking a toll on my family, so I decided to end the travel, and find a church home,” said Tullis, who grew up at Oklahoma City, Westlawn and was saved at age 9.

He took a job as music minister at Oklahoma City, Northwest’s North Campus, where he came in contact with 16-year-old Seyeb, who was later adopted by Tullis and his wife, Terri.

“Seyeb was in our youth group, and one of our sons led him to the Lord,” said Tullis. “One day when I took him home, his mother had his bags packed and setting on the porch. She told us we could take care of him, and we did.”

It was about this time when God began speaking to Tullis about planting a church.

“I asked God who was going to preach, and He said ‘You are,’” recalled Tullis. Then I asked Him where the church would be, and I said, ‘You’ve got to be kidding.’”

It was very clear to Tullis that God was leading him to plant a church in The Flats.

With a lot of faith, Tri-Church began in January 2010 at Oklahoma City, Crestwood, the closest place he could find to his old neighborhood.

By November, the fledgling church, now up to about 24 people, had secured the blessings of the leadership at Mark Twain Elementary School, just two blocks from where Tullis grew up.

“I knew to reach the neighborhood, we needed to partner with the school,” Tullis said. “I called the principal and told her I was the pastor of a church that didn’t exist.”

The church members started ministering to the school and its students before moving in, giving each of the 288 students bags of socks and underwear, doing music with the students and tutoring in the Whiz Kids program.

“By Christmas, we were up to about 40 people, and we divided them into 15 teams, gave each team $500 and did Christmas for 15 families in the neighborhood,” Tullis revealed. “Four of those families came to know Christ.”

Tullis admitted that more than half of the church’s bank account was used for the Christmas gifts, but by January, $20,000 of that was restored.

“You can’t out give God, but we try,” commented Tullis.

Start-up of the church was partially made possible by gifts to the Edna McMillan State Mission Offering, and the offering will continue to help the church for several years.

Greg Penna, church planting strategist with the Baptist General Convention of Oklahoma, consulted with Tullis as he began thinking about planting a church.

“When Ernie and I first talked, I was a little skeptical because his vision was so big,” said Penna.

Penna said he is amazed the church has gone this far this fast, but believes the generosity and diversity of the people has played a part in that.

“I think God is blessing the church because it has been a good steward of the people God has brought to them,” Penna noted. “Ernie has worked very carefully to make sure the people they come in contact with have the opportunity to hear the Gospel and respond to it, then get them into groups and relationships that help them mature in their faith. They take this stuff seriously. At the end of the day, every single individual matters.”

Before going to the BGCO, Penna and his wife planted four churches, so there are some general things he is able to help new churches with.

“Many of our church planters have never taken a seminary class on church planting,” observed Penna. “They just have this call of God, and they need people around them to help with the nuts and bolts to be successful.”

Tullis said one of the things he did at the school was to commission an artist to draw characters from the children’s book, Where the Wild Things Are, on huge pieces of sheetrock. Then the children were allowed to paint the figures, using 37 different colors. The paintings, with the children’s names on the back, now hang in the school’s library.

Tullis said the fun thing about Tri-Church is that the membership, which now runs 60-70, consists of people who never have been in church.

“We are reaching the lost people in the neighborhood,” he said.

He noted that one Sunday, he looked at the cars in the parking lot and saw luxury vehicles parked next to cars held together by duct tape.

“There was such a diversity in the parking lot, but inside, the people are all the same,” he pointed out.

Although the average yearly income in the neighborhood is about $12,000 per household, Tullis said the first offering taken by the church (for tornado relief) brought in $1,300.

Tullis said one of his favorite Bible stories is that of Shadrach, Meshack and Abednego in the fiery furnace.

“God is not with us if we just sit around and talk, but He is with us in the fire,” he said. “We have to step into the fire.”

He said when the men came out of the furnace, there was no evidence of flames except that the ropes that bound them were burned off.

Tullis noted that the church is a little odd because it doesn’t have Sunday School, simply because the facilities aren’t available, and he doesn’t give an altar call.

“The reason for no altar call is that the people don’t understand that vernacular,” he explained. “We tell them if the Lord has spoken to them, they can pick up business cards and call us.”

Tullis commented that the neighborhood where the new church is located is as lost as China, but “if we give it to Jesus, He will reach the people.”

“The story of the loaves and fishes is in the Bible twice,” Tullis observed. “And yet the Bible said if the miracles of Jesus were all written down, the world couldn’t contain the books, so why is this story repeated?”

Tullis said he believes it is because there were a different number of people and different amounts of food, yet in both instances, Jesus looked at the multitudes and had compassion.

“What we had at Tri-Church was a rock band and a reluctant preacher, but we gave it all to Him, and He’s reaching the multitudes.”

Bo Holland, head of the BGCO church planting team, said his team is excited about what Tri-Church has done to reach the community.

“To reach the lost population of Oklahoma, we need more planters who will step forward and do things that are nontraditional or outside the box to reach the growing population of the state,” he said.

Holland added that one thing that would help with any new church is a partnering church(es).

“If we could have more churches come alongside new church plants, it would enhance our church planting tremendously,” he said.