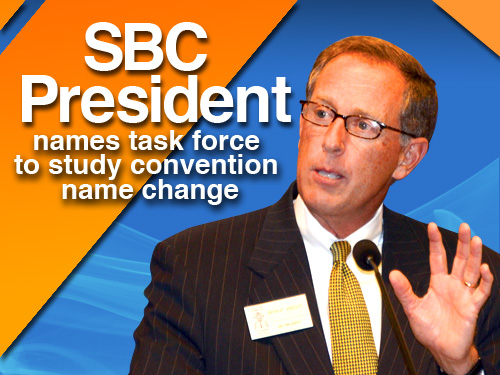 Wright, who was re-elected to a second one-year term during the SBC annual meeting in Phoenix in June, said he believes the study will be helpful for two main reasons.

“First, the convention’s name is so regional,” he said. “With our focus on church planting, it is challenging in many parts of the country to lead churches to want to be part of a convention with such a regional name. Second, a name change could position us to maximize our effectiveness in reaching North America for Jesus Christ in the 21st Century.”

Wright announced the task force during the opening session of the SBC Executive Committee’s Sept. 19-20 meeting in Nashville, Tenn.

Wright said Jimmy Draper, retired president of LifeWay Christian Resources and a former SBC president, has agreed to serve as chairman of the task force. Wright will serve as an ex officio member.

The Monday evening announcement led some Executive Committee members to express concern over the possibility of a name change and of the task force being asked to serve without convention approval. Some also said the issue could be divisive. Wright responded by saying any proposed name change must be approved by messengers.

Executive Committee member Darrell P. Orman, pastor of Stuart, Fla., First, made a motion that convention attorneys study the issue for one year “before we take any action” on possibly changing the name. That motion failed, 39-20.

Motions to study a name change have been presented to the convention on numerous occasions—for example, 1965, 1974, 1983, 1989, 1990 and 1998. More recently, the convention was asked in its 1999 annual session in Atlanta to conduct a “straw poll” to consider a name change. The “straw poll” was defeated on a floor vote. A motion at the 2004 annual meeting in Indianapolis to authorize the SBC president to appoint a committee to study a name change was defeated on a ballot vote (44.6 percent yes; 55.4 percent no).

Wright, pastor of Marietta, Ga., Johnson Ferry, emphasized the task force’s role is to advise him on the questions he has given them to consider.

“Obviously, this is not an official committee empowered by a vote of messengers to an SBC annual meeting,” Wright said. “It is a task force I am asking to advise me as president on whether this is a matter we should bring forward for convention action.”

Wright said he is hoping the task force will be able to provide an interim report that he can share with the SBC Executive Committee during its Feb. 20-21 meeting, with the possibility of a final report in time for the SBC annual meeting June 19-20, 2012, in New Orleans.

Any proposed name change, as well as other legal implications involved in a name change, would have to be approved by a majority of messengers at two consecutive SBC annual meetings, according to the convention’s constitution.

Because the task force is not an official committee of the convention, its members have agreed to pay their own expenses, Wright said.

The other members of the task force are:

• Tom Elliff, president of the International Mission Board.

• Kevin Ezell, president of the North American Mission Board.

• Paige Patterson, president of Southwestern Seminary in Fort Worth, Texas.

• Roger Spradlin, co-pastor of Valley Church in Bakersfield, Calif., and chairman of the SBC Executive Committee.

Wright said he is eager for Southern Baptists to participate in the discussion about a possible name change.

“I want the task force to have the benefit of the best thoughts and ideas individual Southern Baptists have about a potential new name for the convention,” Wright said. “In that regard, I am having my web team create a place where Southern Baptists can give their input about what a possible new name might be.” That website at Pray4SBC.com went live Sept. 20.

“It also is imperative that Southern Baptists participate in this process by prayer,” Wright said. “The members of the task force will need wisdom and discernment as they pursue this inquiry. We will need God’s guidance as we consider whether to move forward with a proposed name change.”