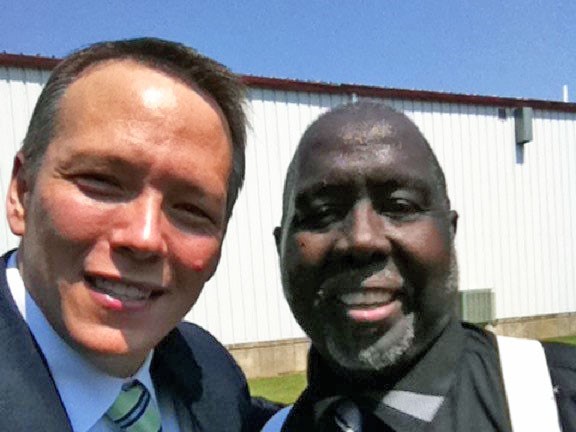 Above: Vern Charette, left, and Jesse Joyner, the pastor who shared words of life with Vern.

The story might be apocryphal, but when Thomas Edison was a child, his teacher sent him home with a note for his mother. As his mother read it, she began to sob. Of course, little Tom saw this and asked his mother what the note said. She said, “It says ‘Your son is a genius. This school is too small for him and does not have enough teachers to train him. Please teach him yourself.’”

From this point on, Tom was homeschooled by his mother. She allowed him to pursue whatever subjects interested him.

Years later, the famous inventor’s mom passed away. As Edison was rummaging through her things, he came across the note from his teacher. When he read it, he began to weep. It said, “Your son is mentally ill. We will not allow him to attend school anymore. We do not have the teachers to handle him. You will have to teach him yourself.”

Edison’s mother chose to speak words of life to her son, and he was transformed by those words.

I remember when words of life were spoken to me. I was 18 years old. I was living with my older sister in an old trailer house in West Tulsa. My sister would later die at the age of 39 from drugs and alcohol. My father was also an alcoholic, and as a teenager I was following suite. Not only was I entangled in drugs in alcohol, I had dropped out of school and was living an immoral life.

Then, through the providence of God, I met a Black, Pentecostal pastor by the name of Jesse Joyner. Jesse not only witnessed to me but invited me to church.

I remember showing up at a little storefront church on a regular Sunday in the summer of 1990. It was perhaps the only time in my life I attended church without an ulterior motive. I did not go that morning so I could play on the basketball team, go to camp, see a pretty girl or eat pizza with the youth. Jesse had begun to speak words of life to me, and I was drawn to those words.

Jesse preached that Sunday, and I was mesmerized by the words of life. Then, during what we call “invitation time,” Jesse stepped off the platform and came and stood right in front of me. Then, the most powerful question I had ever been asked proceeded out of his mouth. He said, “Do you want to be saved?”

I am glad he did not ask me what gifts I might contribute to the church or what I knew about the Bible because I had nothing to contribute, and I knew nothing about the Bible. I thought the Epistles were the Apostles’ wives!

Here is what I did know, however. I knew that I was a sinner, and Jesus was the Savior. Broken and weeping profusely I reached out and hugged Jesse. In this moment, as I write this, I am starting to tear up because I realize why I embraced Jesse with such force. I was not just embracing a man; I was embracing the words of life. I was embracing Jesus. Jesse led me to a little praying bench and I prostrated myself and prayed a simple prayer that changed my life. I said, “God, I’m a sinner, save me.”

Later on I would attend Falls Creek, join a small Indian Church, get baptized in the Illinois river and start my formal theological training at Oklahoma Baptist University. I now have a PhD and have taught on the highest level in academia. I have also literally traveled the globe and preached and witnessed to thousands of people. I currently have the privilege of pastoring the greatest group of people on the planet. 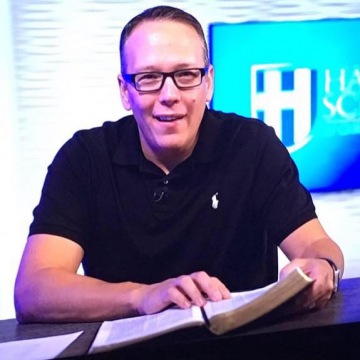 View all posts by Vern Charette