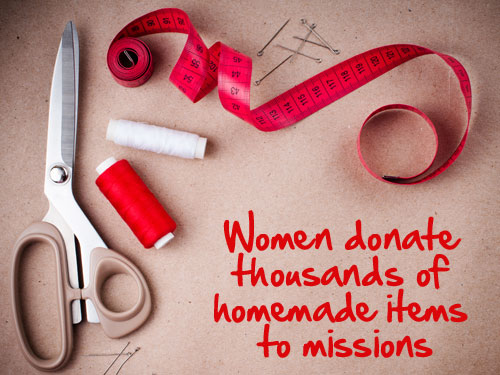 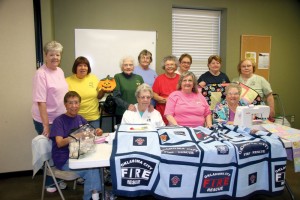 On Tuesday mornings, as many as 27 women gather at Del City, Sunnylane, where since 2004, they have used their skills to make more than 1,000 quilts.

On the same days, across town at Oklahoma City, Springdale, five women have been working since 2002 making 16,649 lap robes, turbans, bonnets and purses with pillows.

These women, who enjoy using their talents to make items, don’t do it for money for themselves or even for their churches. It is a mission. All items are donated to various charities, nursing homes, shelters and the Oklahoma Cancer Society.

The work at Springdale originally started as a Woman’s Missionary Union project, and at one time, about 10-11 women were involved. Now, there are five regulars, said Lawana Ditmore, who is in charge of the project.

Rose Bowles, instructor of The Quilting Friends at Sunnylane, is a master quilter, and said the group there started when a woman asked her to teach her to quilt.

“Soon another wanted to learn, then another, and before long, we had too many to meet in a home, so we decided to put our talents to use at the church,” Bowles said.

Some of the Sunnylane quilters have been quilting for more than 50 years, and others are new to the art. They have donated quilts to Timberwood Assisted Living Center, Grace Rescue Mission, Pauline E. Mayer Youth Center, Canadian County CASA (Court Appointed Special Advocates) for abused children, and have given hundreds of cancer caps to the Oklahoma Cancer Society.

“Recipients are at a dark time in their lives, and the gifts brighten their day,” said Bowles.

“We usually have one main ministry goal a year,” said Bowles. “One year, we set a goal of 93 twin-size quilts to City Rescue Mission, and the goal was met in a timely manner.”

Both groups receive material as donations.

Springdale got its initial start-up material from the Oklahoma City Baptist Mission Center.

“Just about the time we start running out of material, a donation will come in,” said Ditmore.

Springdale, which averages about 30 in Sunday School, provides a small line item in its budget for thread, stuffing or needed items that haven’t been donated.

The Sunnylane women also receive donations, but in addition, have a quilt show and bazaar every other year to provide finances for the ministry.

“Any fabric that isn’t usable for our projects, and even tiny leftover scraps are donated to  Grace Rescue Mission which recycles it and uses the money for gas for its van,” said Bowles, “so nothing goes to waste.”

Bowles said they will also do special projects when the need arises.

“A woman called and told us about a family in her neighborhood with four children, whose father was killed in a drive-by shooting,” recalled Bowles. “We made a quilt for each of the four children.

“We also helped a Girl Scout who needed a project to earn her next badge,” Bowles said. “We donated 103 baby blankets to her.”

Bowles added that if there is a need, they will try to meet it.

Their mission statement is from 1 Peter 4:11, which Bowles said jumped off the page as she was reading during her quiet time one day. It says, “If anyone speaks, let him speak as the oracles of God. If anyone ministers, let him do it as with the ability which God supplies that in all things God may be glorified through Jesus Christ, to whom belong the glory and the dominion forever and ever.”

Each group welcomes those who enjoy sewing and quilting. For more information about The Quilting Friends at Sunnylane, call 405/677-0591.

For information about the Springdale group or to help, contact Lynn Young at 405/818-2810.