With election over, prayer & grace urged 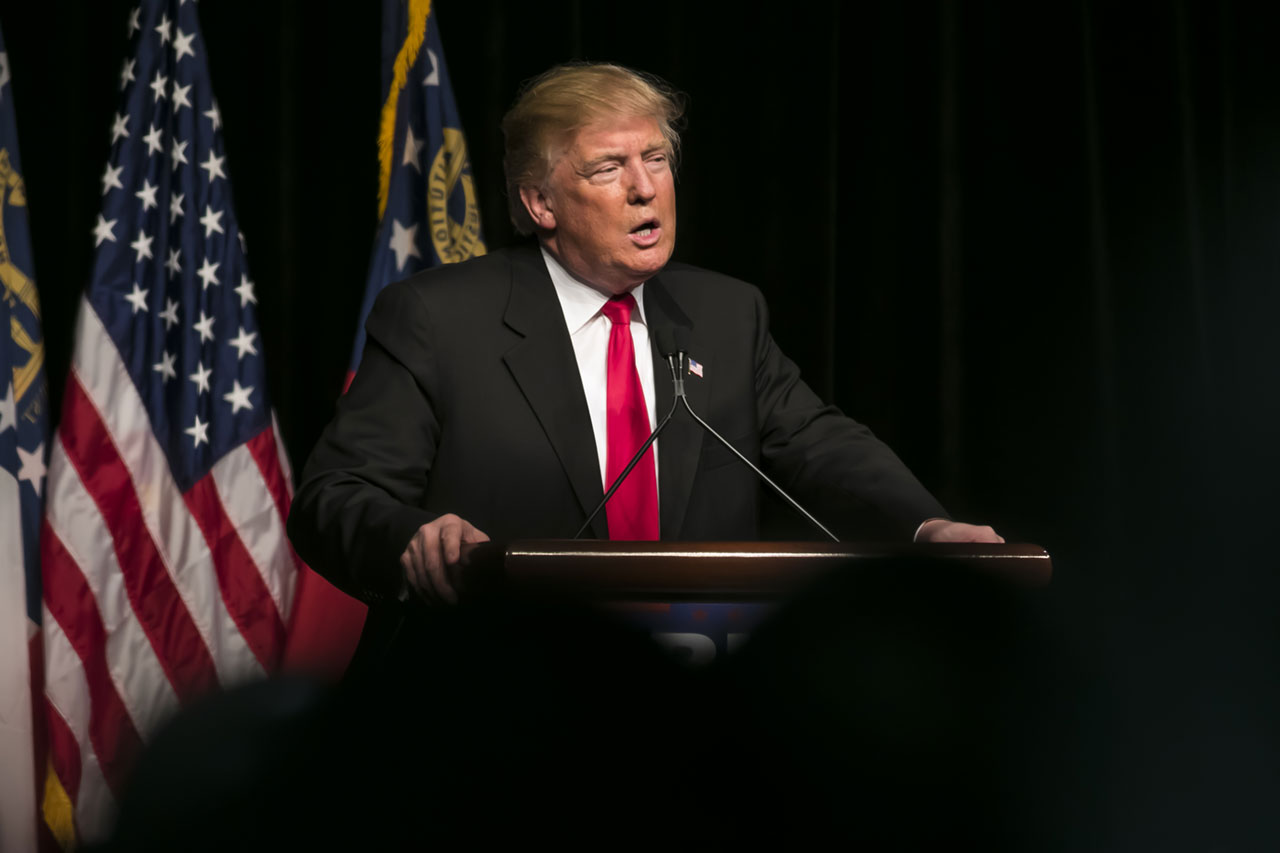 WASHINGTON (BP) — Donald Trump pulled off a startling victory with the support of four in five white voters who identified themselves as evangelical Christians, and Southern Baptist leaders 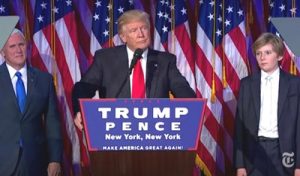 “Now it’s time for America to bind the wounds of division,” said President-elect Donald Trump after his opponent Hillary Clinton conceded early Wednesday. “It is time for us to come together as one united people. It’s time.”
Screen capture from New York Times

called for prayer for the president-elect and grace toward others.

Trump — the billionaire, celebrity businessman — completed his unexpected rise through the Republican Party and the American electorate to defeat Democratic favorite Hillary Clinton Tuesday (Nov. 8), surprising pollsters and most observers in the process.

Though trailing in the popular vote, Trump surpassed the 270 votes needed in the Electoral College and held a 279-228 lead over the Democratic nominee as of 3 p.m. EST Wednesday (Nov. 9), according to The New York Times. The winner in three states — Arizona, Michigan and New Hampshire — had yet to be called.

Republicans not only regained the White House, but they defended their majorities in both chambers of Congress.

A division among Southern Baptists and other evangelicals marked the rancorous presidential campaign. In the weeks and months leading to the election, some made clear their intention to vote for Trump while others declared they could vote for neither Trump nor Clinton because of character and/or policy issues. Black and Hispanic evangelicals especially opposed Trump’s candidacy.

On Election Day, 81 percent of voters who identified themselves as “white evangelical or white born-again Christians” said in exit polls they chose Trump, The Times reported.

Both candidates called for unity afterward.

“Now it’s time for America to bind the wounds of division,” Trump said, according to The Times, after Clinton conceded early Wednesday. “It is time for us to come together as one united people. It’s time.”

Trump described that as “so important” to him.

“We owe him an open mind and a chance to lead,” she said.

Steve Gaines, president of the Southern Baptist Convention, cited the Bible to urge Christians to pray for Trump, as well as all other government leaders, and “to honor all people, even those with whom we disagree.”

“If we disagree with someone’s opinions, we must do so without attacking the person,” Gaines said in written comments for Baptist Press. “There has been far too much inflammatory rhetoric coming from Christian leaders throughout this election. That kind of speech is divisive, ungodly, uncalled for and sinful.”

Byron Day, president of the National African American Fellowship of the SBC, acknowledged the election “resulted in joy for some and disappointment for others. Now that the rhetoric and the finger-pointing is over, it is time for the nation to come together.”

Day, senior pastor of Emmanuel Baptist Church in Laurel, Md., also urged Christians to follow the Bible’s teaching to pray for and support the president-elect.

In written remarks for BP, he encouraged “all Southern Baptists, regardless of political affiliation, to pray for the healing of our nation and for spiritual awakening. Southern Baptists must take the lead in healing a nation that is divided on many fronts. Jesus is the only answer to our nation of sin-sick souls.”

Russell Moore, president of the Southern Baptist Ethics & Religious Liberty Commission, said in a Wednesday blog post, “Many of us have deep differences with our new president, and would have no matter which candidate had been elected, but we must pray that he will succeed in leading our country with wisdom and justice.”

The presidential election shows conservative evangelicals “are politically homeless,” Moore said. In the movements that dominate both political parties, “moral concerns — certainly personal character and family stability questions — are marginalized. We now have a politics of sexual revolution across the board.”

Southern Baptists and other conservative evangelicals, he wrote, should “maintain a prophetic clarity that is willing to call to repentance everything that is unjust and anti-Christ, whether that is the abortion culture, the divorce culture, or the racism/nativism culture.”

In addition, “no matter what the racial and ethnic divisions in America, we can be churches that demonstrate and embody the reconciliation of the kingdom of God,” Moore said. “We belong to each other because we belong to Christ.”

Fred Luter, who became the SBC’s first African-American president in 2012, said, “As in any presidential election there are winners and losers. As Christians the right thing to do is congratulate the winners and console the losers.

“We are also obligated to pray for the new president and do what we can to bring our nation together during this time of transition,” he said in written remarks for BP.

Frank S. Page, president of the SBC Executive Committee, said Southern Baptists will pray for Trump “to follow the paths of righteousness. We will encourage and speak into his life as best we can.”

Page said in a written statement he will continue to pray and encourage Trump:

— “To keep his word to provide religious liberty for all religions.

— “To protect the life of the unborn as well as the born.

— “To encourage him to protect marriage as being between a man and a woman.

— “To nominate Supreme Court judges who will protect the Constitution and not input activist agendas.”

“Southern Baptists and evangelical Christians will continue to witness to the lost, minister to the hurting, shelter the dispossessed and displaced, be the first to react in times of national and local crisis, and continue to speak up for the way of the Lord,” Page said.

J.D. Greear, pastor of The Summit Church in the Raleigh-Durham, N.C., area and a candidate for SBC president earlier this year, urged Christians to extend grace to each other.

“Don’t assume that fellow believers who voted for Trump did so because they are utterly insensitive to minority struggles or unconcerned about misogyny, xenophobia, or sexual assault,” he wrote in a Wednesday blog post. “Many voted for Trump despite their disgust at those things, because they thought the things Clinton stood for were at least as dangerous to the country.

“In the same way, don’t assume that those who voted for Clinton (or didn’t vote for either) are naïve about the threats to religious liberty or too cowardly to oppose abortion. Many believers were very aware of those things but just couldn’t support a man who displayed the significant character failings of Trump.

“Be humble and charitable enough to realize that many mature Christians came to different conclusions about what the right posture was, and give them the benefit of the doubt where you can,” Greear said. “You don’t have to agree with their conclusions, but in the church we can and must demonstrate a humility, forbearance, and civility usually absent from public discourse.”

Many Southern Baptists and other evangelicals opposed Clinton not only because of ethical problems that had plagued her but her policy positions, particularly her advocacy for unfettered abortion rights. Others refused to support Trump because of what they described as his autocratic inclinations, abusive rhetoric, immoral lifestyle and untrustworthiness on moral and religious liberty issues.

Despite all the ethical, character and moral issues involved, economics and ethnic demographics proved “very decisive in this election,” said Scott McConnell, executive director of LifeWay Research. “Our pre-election research showed that economics — not religious belief — was the most pressing concern driving the votes of those with evangelical beliefs.

Democrats had hopes during the campaign of sweeping the presidency as well as both houses of Congress, and it still appeared they could win the White House and Senate when Election Day arrived. The GOP, however, kept the Senate, leading 51-47 in seats as of 3 p.m. EST Wednesday (Nov. 9). Races in Louisiana and New Hampshire remained to be decided. In the House of Representatives, Republicans held a 239-193 advantage. The winners of three seats had yet to be determined.