When one door closed, God opened another 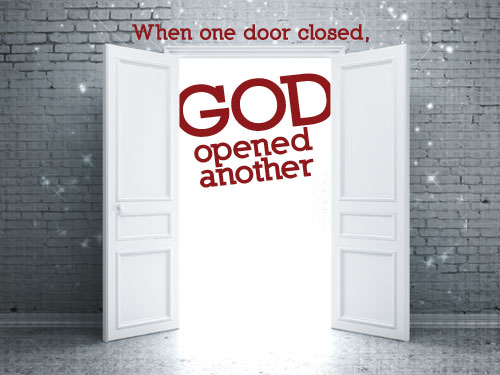 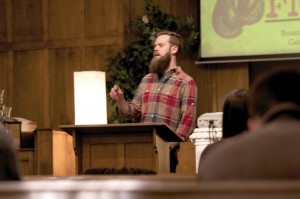 “Other than being a small and old congregation, we were a healthy church,” said Jack Kilgore, chairman of deacons at Moore, Sharon, in explaining why the church disbanded. The 41-year-old church closed its doors after worship services on Nov. 11.

“Because of deaths in the membership, advanced ages and poor health, we decided it was time to do the right thing,” said Kilgore.

The right thing, the congregation decided, was to give the property to Union Association, which will use the facilities for new church plants.

“Our plan is not to sell the property, but to continue to reuse it by starting a church there, and when the church outgrows that building, it can move to a different location, and we can start another small congregation,” said Preston Collins, executive director of Union Association.

Collins said the first church to use Sharon’s facilities will be Love and Justice Church.

“This is one of those examples of allowing the old wine to stay in the old wineskin and finish,” said Collins. “And now we’ll take that building and redo it for new wine (a new church).

Kilgore said the Sharon congregation has been dwindling for some time, and when the church didn’t have a pastor (Paul Box, retired pastor of Moore, First, has been serving as interim), the music director was getting ready to retire and the pianist was moving, “we decided we didn’t have much of a future.”

Kilgore revealed that the church was running around 20-22 in Sunday School with 5-6 more in worship.

“The members will scatter,” he noted. “We are completely surrounded by some healthy churches, such as Moore, First, Moore, Regency Park and Oklahoma City, Brookwood.”

To add to its problems, Sharon is located in an old neighborhood, which is out of the way for traffic.

“We decided our prospects were to stay around and watch us drop off one at a time or disband,” Kilgore said. “We’ve had something like 30-40 deaths in the church in the last few years.”

Kilgore said Sharon has always been a struggling church. 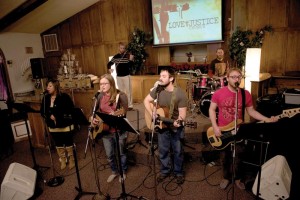 The worship team of Love and Justice Church, which will use Sharon’s facilities, leads in song

“It was originally part of Oklahoma City, Kelham’s mission program, and called Lockhoma Mission,” he said. “About 1961, the pastor and most of the congregation elected to move from that location to Regency Park and start a church in that area of Moore. However, a few people in the neighborhood where Sharon is located wanted to retain services there, so they operated as a mission until 1971, when they commissioned Sharon as a church.”

Because of the location and surroundings, the church continued to struggle until 2000, when a group of about 40 seniors from Moore, Regency Park moved there and resuscitated the church and kept it going for another 12 years.

The facilities are in good repair and paid for, Kilgore said. The auditorium will seat close to 200, perfect for a church with new beginnings.

Love and Justice pastor Andrew Burkhart said his congregation of about 150 has spent the last two years praying for a meeting place that is more permanent. The church currently meets in Brookside Wedding Chapel, which is less than a mile from the Sharon location.

“This is a massive blessing for us,” said Burkhart. “It’s going to allow us to go back to one service and to serve the people in our church better.”

The church currently conducts community groups during the week at locations throughout the city, but Burkhart said the new facilities will open up opportunities for more Bible studies in one location.

He said Love and Justice is also looking at using the facilities to help as many in the neighborhood as possible.

“We’re hoping to do some kind of food pantry for the neighborhood and people in the church who are in need,” he said. “We want that location to be used throughout the week to serve the neighborhood.”

Burkhart said the congregation plans to be in the new facilities by the first or second week in February.

“The building has been well taken care of and is in good condition,” he noted. “We are going to do a $30,000 remodel to update it a bit and make it more accessible to families.

“It is a real blessing to move in mortgage free,” Burkhart said. “It is a big financial release for us.”