What Millennials really think about evangelism 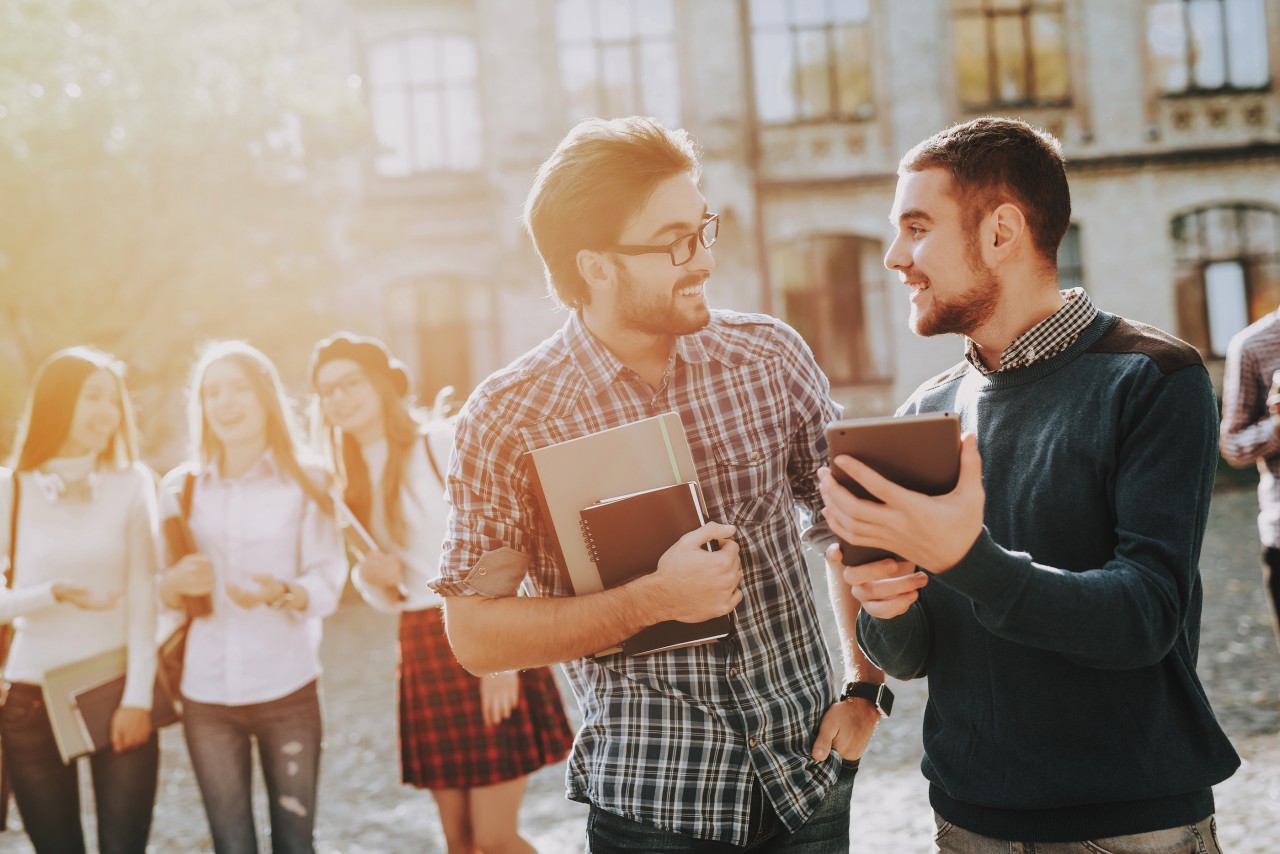 Almost half—47 percent—of practicing Christian millennials told the research group that “it is wrong to share one’s personal beliefs with someone of a different faith in hope that they will one day share the same faith.” (Barna defines as “practicing Christian” those who identify as Christian, agree strongly that faith is very important in their lives, and have attended church in the past month.)

And it’s true—if half of millennial evangelicals thought that sharing their faith was morally wrong, the future of evangelism would be in serious trouble.

But that isn’t quite accurate.

‘We’re Not Seeing Them Back Off’

“It’s a great study,” said Billy Graham Center Research Institute director Rick Richardson. “And Barna does a great job. Overall, it pretty much agrees with our research, too.”

Except that one answer.

“So much depends on how you ask the question,” he said. “There’s no way to know what people were thinking when they answered.”

It’s possible young people focused on the “of a different faith” phrase and thought of Catholics, or even a Protestant denomination different from theirs. Or maybe the phrase seemed to leave off atheists and agnostics, who most often come to mind as people in need of the gospel. 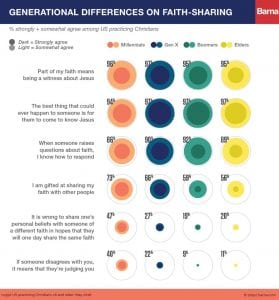 In any case, “drawing the conclusion that 47 percent of practicing Christian millennials think sharing their faith is always wrong would be a bad conclusion,” Richardson said.

It doesn’t line up with what Richardson sees, or even with the rest of Barna’s survey. Practicing Christian millennials said part of their faith means being a witness about Jesus (96 percent), the best thing that could ever happen to someone is for them to know Jesus (94 percent), and that when someone raises questions about faith, they know how to respond (86 percent.)

It also doesn’t line up with a LifeWay Research and Ligonier Ministries surveyreleased this fall. Researchers asked 3,000 American adults if it is “important for me personally to encourage non-Christians to trust Jesus as their Savior.”

About 58 percent of 18- to 34-year-olds agreed—more than any other age group, and up from 48 percent in 2016. If you narrow it to just young evangelicals, the number goes up to 89 percent.

“We’re not seeing them back off on evangelism,” LifeWay executive director Scott McConnell said.

Campus Outreach isn’t seeing that either.

“We are seeing as many, if not more, people come to Christ on college campuses than I can ever remember,” said Brian Lewis, who has been with Campus Outreach for 32 years. “And guess who is leading most of these people to Christ? The millennial staff.”

At a Cru winter retreat for six Northeast universities in January, around 65 students spent an afternoon learning how to share their faith.

“I didn’t hear any pushback, like ‘I can’t believe we’re spending time on this’ or ‘This is offensive,’” said Rachel Gilson, a millennial who works for Cru at Boston University (BU). “What we heard from students was they were so thankful to have a place to talk about sharing their faith in a way that was winsome and Christlike.”

Here’s a better conclusion to draw from Barna’s question: Millennials are more sensitive than previous generations about how they share their faith.

Their secular peers think evangelizing “is an aggressive colonialist move,” Gilson said. “It trips every wire. . . . My students are highly aware of the vision of the 19th-century white man who goes to Africa or Southeast Asia and doesn’t just share the gospel, but also tries to force these people to be Europeans. They want to be as far away from that as possible.”

In a 2015 survey, nearly half of Wheaton students said the biggest obstacle to sharing their faith was fear of what other people would think of them, said physics professor Robert Bishop. He’s also the associate director of Wheaton’s Evangelism Initiative and a Presbyterian Church in America ruling elder.

“Their comments include things like, ‘I feel like I’d be imposing my view on somebody,’ or ‘I’m worried about losing a friendship,’ or ‘They’ll think I’m being judgmental,” he said. The next biggest obstacle was feeling inadequate in evangelistic social interactions (48.5 percent), followed by feeling unprepared (26 percent).

In secular universities, Christians can be on the receiving end of a lot of aggressive opinions—in one ethics class at BU, the professor maligns Christianity several times a week, Gilson said. “So the students know there’s a way to share their opinions that is extremely off-putting,” she said.

The post-Christian environment—especially strong in those secular universities and urban areas where many young people live—also means that talking about faith “loses you social status points,” said Seattle pastor David Fairchild. More than 30 percent of his church’s 550 members are millennials.

“One day not long ago, to be a Christian held some social capital and opened some doors,” he said. Today, young people’s “slight embarrassment of church and Christianity isn’t because of Jesus or even their local church. It’s because a lot of what is put out there with the label of Christianity on it is offensive and unhelpful. To be labeled a Christian means you’re a racist misogynist bigot.”

The shrinking number of American Christians also means millennials have more non-Christian friends, he said. When young Christians read a question like Barna’s, they’re probably thinking about a specific person. For older generations, the question may be more theoretical and thus easier to answer.

“The environment is a little more hostile now,” Lewis said. “The temperature feels turned up.”

So it’s no wonder millennials are careful not to offend. And certainly, being gentle with people and careful with your tone is a great idea.

It’s one of this generation’s greatest strengths. But it’s also their biggest challenge.

Almost three-quarters of millennials (73 percent) told Barna they were “gifted at sharing my faith with other people,” more than Gen X (66 percent), boomers (59 percent), or elders (56 percent.)

“I wonder if students who are saying, ‘I’m good at sharing my faith’ are thinking, ‘I’m winsome at sharing that I have faith,’” Gilson said. “That’s different from sharing the gospel.”

Cru tells students they “haven’t shared the whole gospel with someone until you get them to a point of decision,’” she said. “That doesn’t mean conversations that stop short of that aren’t valuable. But we need to get people to see the choice—they’re either for or against Jesus as their Savior.”

Pushing the conversation from “this is true for me” to “this is also true for you” is this generation’s biggest challenge, Richardson said.

Pushing the conversation from ‘this is true for me’ to ‘this is also true for you’ is this generation’s biggest challenge.

“You can share your faith story but not imply somebody ought to believe what you do,” he said. “How do you take the step and tell them they should believe what you believe? That’s the big transition in conversations and relationships.”

That’s hard for all Christians, not just millennials. A 2016 LifeWay survey found that only a third of 2,000 unchurched Christians have heard the benefits of being a Christian (35 percent).

“The unchurched indicate they know Christians, but most of the time they’re not saying [the Christians] are talking about their faith too much,” McConnell said. “We’re not pressing the line here. We’re not overdoing it.”

Most of the unchurched (79 percent) said that “if a friend of mine really values their faith, I don’t mind them talking about it.” Almost half said they’d “interact freely” if the topic came up (47 percent).

“If young adults are being tentative at all—and from all the other data, I don’t think they are—they might be more sensitive and tactful than they need to be,” McConnell said.

From Stories to Decisions

Millennials hear and tell their stories in a different way than the “I was a horrible person who got saved by a prayer and now I’m an amazing person” testimony that used to crop up in churches and rallies, Fairchild said.

He teaches them to share “microredemption stories” of everyday life—“I had a fight with my wife last night, and here’s how I sinned, and here’s how God forgave me and helped my wife forgive me.” Those “vignettes” show unbelieving friends “what it looks like to put on Christ,” he said.

Cru teaches the same way. “One of the main things we do is to help staff and students figure out how to share their testimony in a way that people around them can see that Jesus is relevant for their lives right now,” Gilson said. “We don’t want to say we prayed at 5 years old and now everything is fine. We want to show how Jesus relates to a 20-year-old full of stress.”

Talking about the stress—or the anger, or the struggle with pornography, or the embarrassingly bad decision—is crucial for a generation who’ve been marketed to since first swiping onto their parent’s smartphone. (With social media, they also market themselves.) “They can smell inauthenticity a mile away,” Fairchild said. “They have a great filter. And they treasure authenticity.”

But then millennials have to bridge the gap from “Jesus is making my life better” to “You have to decide whether you’re for or against him,” Gilson said.

Millennials have to bridge the gap from ‘Jesus is making my life better’ to ‘You have to decide whether you’re for or against him.’

At Wheaton College, Bishop gives his students the language to use.

“The second law of thermodynamics tells us that that to transform energy into something useful, there is an energy cost,” he says, helping students see a bright line between physics and the cross. “As our bodies transform the food we eat into energy that keeps us going, there is an amount of energy given off as heat that keeps us warm and healthy. God made a world where an ordinary physical fact that we usually don’t think about enables life.”

Their first reaction is, “Oh, I never saw that,” he said.

A God who loves us enough to give us the second law of thermodynamics, Bishop tells students, would also give his Son for us.

If you’re having a conversation with a nonChristian about this, “you can talk about God’s love in Christ in various ways: ‘Love always has a kind of cost to it, have you noticed?’” he says. “Or ‘To fully live in the love of God, he made the ultimate sacrifice to bring us into relationship with him.’”

And then the kicker.

If the conversation progresses, “you could ask them something like, ‘Is there anything that’s keeping you from accepting Jesus as your Savior right now?’” he tells students.

At Trinity West Seattle, Fairchild uses an older generation to help millennials cross that gap. In community groups of mixed ages, he encourages the older members to “be there for [the millennials] when they ask questions.”

He likes the evangelistic mentorship possibilities. “It’s such a beautiful thing when millennials say, ‘Hey, what do you do with this?’”

In every generation, “we have some things where we’re really intuitively in line with God, because he made us in his image,” Gilson said. “And every culture has things that are out of step with God, because we’re fallen.”

No matter their strengths or weaknesses, “we aren’t going to run into a generation whose heart is harder or more powerful than God’s Word in changing and shaping a heart for evangelism,” Lewis said.

Gilson agrees. “The gospel is the same gospel. You have all these walls that come down instantly once the Spirit moves. . . . To quote [pastor and TGC editor] Sam Allberry, ‘It is laughably easy for God to save anyone.’”

And like previous generations, she said, “when [millennials] see God is real and active and his promises are meaningful—they want to share that with their peers.”

Sarah Eekhoff Zylstra is senior writer for The Gospel Coalition. She earned her master’s degree in journalism from Northwestern University. 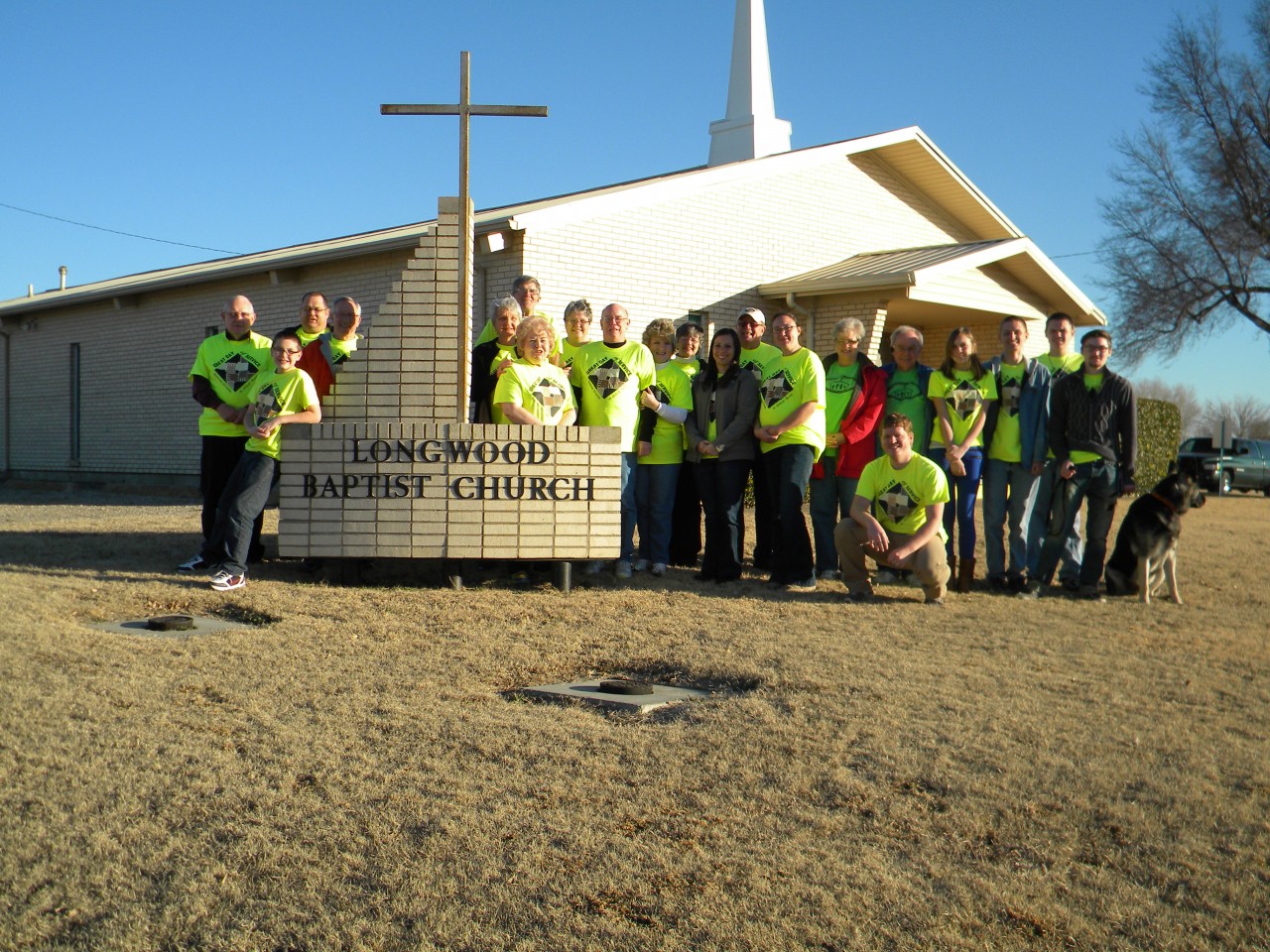 Encourage: A prayer for Oklahoma Baptists

The ‘Heart’ of children’s ministry 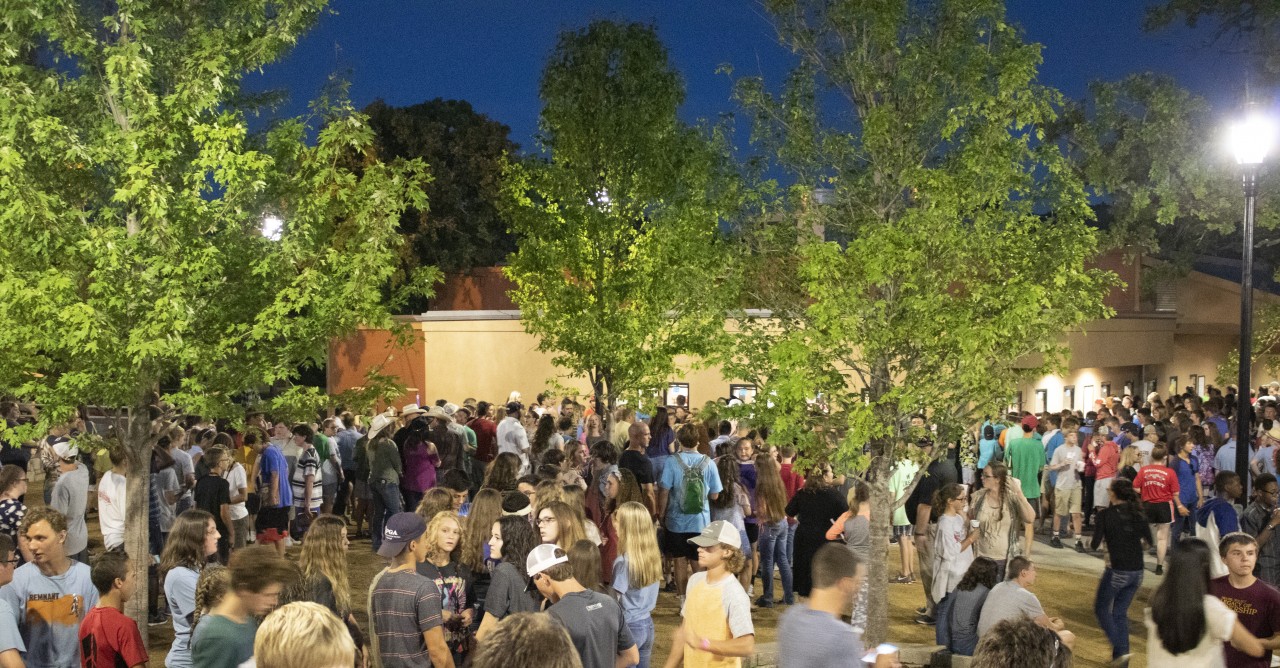 Falls Creek: A city made for summer