Above: Tatay, right, is a believer who came to faith at 81 because students from Nehemiah Teams came to his village and shared the gospel. He keeps a notebook with names and signatures of each visitor he gets. IMB Photo

Across the 2,000 inhabited islands of more than 7,600 that make up the Philippines, is a vast spiritual darkness. People are not only trapped by the islands but trapped in their sin—separated from God because many have not yet heard the life-saving Gospel.

International Mission Board (IMB) missionaries Jess and Wendy Jennings committed their lives to bringing the Gospel to these islands. The Philippines is their home, the place where they raised their three children, who are now adults. 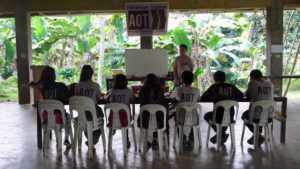 As part of an intensive training in the Nehemiah Teams program, students participate in a Bible study, preparing them to take the Gospel first to the Philippines and then to the nations. IMB Photo

Much of their work has been focused on student mobilization, specifically through Nehemiah Teams. Nehemiah Teams is one avenue for students to serve with the IMB. The Jennings coordinate the work of training and sending out both American and Filipino students each year. Since 2004, almost 2,400 Americans and 1,200 Filipinos have participated in Nehemiah Teams. They see the long-term value of short-term commitments made by students who experience God’s work among the unreached.

A man called “Tatay” was one life whose eternity changed when he met a small group of believers committed to reaching his remote island with the Gospel. The Journey Church in Tennessee adopted his island, first in prayer and then by sending volunteers to serve on the island. Several mission teams met him and shared the Gospel. Tatay, 81, welcomed visitors and enjoyed time spent with them in his home.

During the summer of 2019, the church sent a team of college students to live on the island and serve there for several months. Jess went to visit these faithful students and during that trip, the team went to Tatay’s home. Tatay had grown up religious because of the strong Catholic influence that is common in the Philippines, but he didn’t know Jesus personally. By the time Jess met him, the students had already shared six or seven Bible lessons with him. Jess helped facilitate a Bible study on Nicodemus with Tatay. Jess explained that he had two birthdays—the day he was physically born and the day he accepted Christ and was born again. 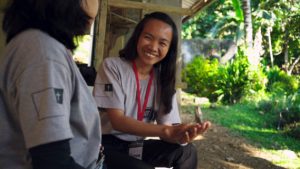 Donna, a student with Nehemiah Teams in the Philippines, takes a moment to laugh with another student on the team. Through this program, hosted by Jess and Wendy Jennings, the students are given an opportunity to go to unreached people groups and hard to reach places in the Philippines to share the gospel with those who have little-to-no access to it. IMB Photo

Tatay kept a notebook in his house with all the names of visitors who came. In this notebook were the signatures of many believers who had shared the truth of the Gospel with him. Tatay asked Jess to sign it. Then Tatay wrote the date and said, “This is my spiritual birthday.”

When Jess visits Tatay, they look at the notebook and talk about that day. Tatay is being discipled by Filipino believers and still looks forward to visitors. God used missionaries, students, a U.S. church and local believers to reach one man on one island, but many lives were changed.

Thank the Lord for the faithfulness of missionaries Jess and Wendy Jennings. Praise God for the willingness of a church to care for the unreached on a remote island in Southeast Asia. Ask God to send more students who are willing to sacrifice a summer or semester so that others can hear truth.