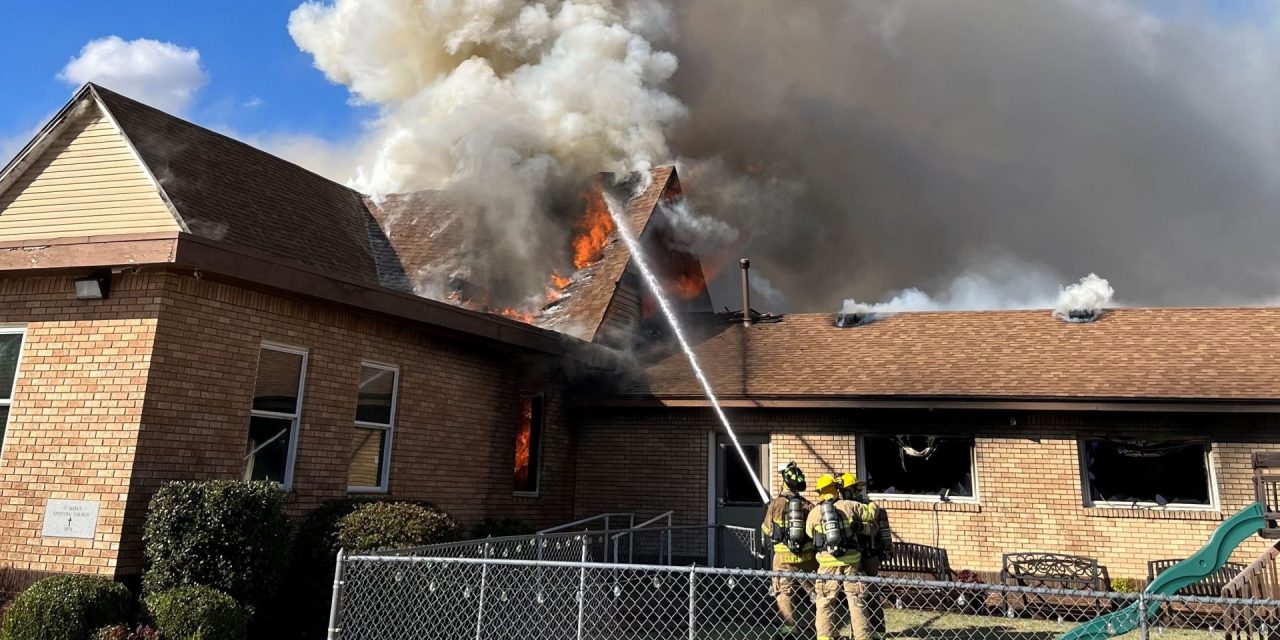 WEATHERFORD—Pastor Skylar Spradlin of Weatherford, Trinity said it was “an ordinary day” when describing how it was before he and worship pastor Larry Jones discovered a fire that started in the church’s sanctuary. 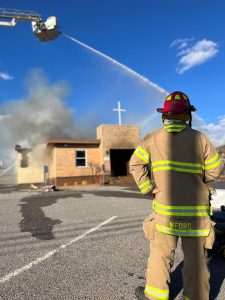 Fire crews worked on the Weatherford, Trinity fire through the evening on Nov. 1, putting out hot spots.

“We were working, and I’m glad because if (Jones) hadn’t been there, I would not have known anything had happened from my office until it was dangerous,” Spradlin said.

Spradlin said he first noticed a flicker of fire in the ceiling above the platform in the sanctuary. “I think it had been burning for a few minutes, but fire was shooting out from our ceiling,” he said.

They didn’t notice at first, but smoke was filling the sanctuary. “I went to grab a fire extinguisher,” Spradlin said, “and by the time I returned and pulled the pen, the fire was already over our heads and spreading so fast.”

Local news reported fire crews arrived at the church around 3:30 p.m. on Tuesday, Nov. 1, and worked through the evening to put out hot spots.

In the hours following the fire, Spradlin said they have received great encouragement from the Weatherford community, as well as from many across the state, including other Oklahoma Baptist churches.

Weatherford, Trinity will meet for Sunday services at the Baptist Collegiate Ministry building at Southwestern Oklahoma State University for the time being, and Weatherford, Emmanuel is offering Spradlin office space. 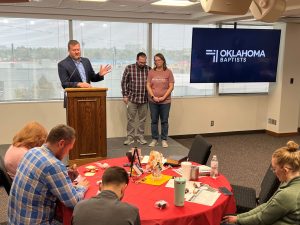 Todd Fisher prays for Skyler and Jamie Spradlin during an Oklahoma Baptists meetings. Fisher also presented the Spradlins a $5,000 check from Oklahoma Baptist Disaster Relief to help defray costs associated with the fire.

On Nov. 2, Todd Fisher, Oklahoma Baptists executive director-treasurer, expressed support for Spradlin and his wife Jamie, presenting the church with a $5,000 check from Oklahoma Baptist Disaster Relief to help defray costs associated with the fire. Fisher, who led the Oklahoma Baptists staff members to pray over the couple, also mentioned that another pastor who soon will retire is offering Spradlin his library, since Spradlin’s library was lost completely in the fire.

Spradlin also said Trinity is celebrating its 50th anniversary in a couple of weeks, and though the building may be gone, he said the church will continue on.

“You never want this to ever happen, but it’s been a great lesson,” Spradlin said about the fire. “Because the building is gone doesn’t mean the church is not here. We are still here and can still celebrate 50 years.

“Our big thing right now is we do need prayer and time and financial support,” Spradlin continued. “But the most important thing we need is prayer. Words of encouragement have been sustaining. We have a long road ahead of meeting in a temporary space, trying to learn how to efficiently set up and tear down. But we are thankful that no one was hurt and can still meet and serve as a church.”

This trying time in Weatherford shows that even when fires destroy a church building, the pastor, church and Gospel work will continue to advance.