Messenger Insight 181 – Walker made it! 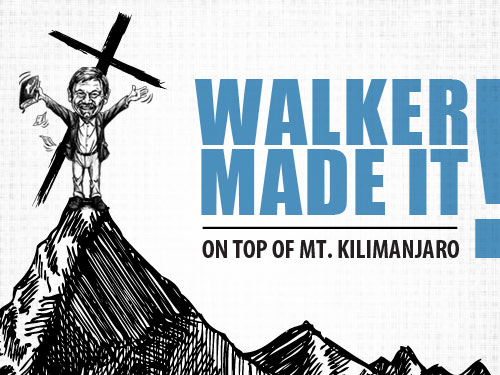 On top of Mt. Kilimanjaro

The Baptist Messenger recently interviewed columnist Walker Moore about his climb to the top of Africa’s Mt. Kilimanjaro while carrying a 12-ft. cross.

Messenger—You just scaled Mt. Kilimanjaro, what an incredible feat. What was that like?

Walker MOORE—First of all, we have made history because no one has ever carried the cross to the top of Mt. Kilimanjaro. We had to get a lot of government permission to do it, and in fact the day before I began climbing I had to interview with the head of the park rangers to climb Mt. Kilimanjaro. He asked me why I wanted to take the cross to the top, and I told him, “I just want to say ‘Thank you, Jesus for 40 years of ministry.’ The ranger told me I could take the cross up under one condition that I would pray for him and his family and the country. And I did. God gave us favor every step of the way, from Panama all the way to Tanzania to the top of the mountain.

Messenger—Now, in one of your Baptist Messenger columns you talked about how the cross created a sensation and that the whole effort was contagious.

Moore—I began with the idea that I would take the cross up to celebrate my 40th anniversary of ministry, but the cross has a life of its own. As soon as we started walking, people started whispering. There was chatter across the whole mountain. On one morning the porters, who carry things up the mountain for other groups, stood in a line as we walked through and cheered the cross on. It just took on a life of its own. At night I would be bundled in my tent with my parka on, my hats on and my gloves on and I would hear people outside talking to the cross. They would be praying, kissing it and touching the cross. It just had a life of its own.

Messenger—This is not something you can just decide  to do one day. You spent a lot of hours training mentally, physically and spiritually for this. What was the preparation like?

Moore—I spent two years preparing for this. It began with a concept of carrying the cross to the top, followed by research of what that would take and then seven months ago, I began physical training. I began carrying a 100-lb. vest and started working out. Even after all my training, it took everything I had, every ounce of my energy, to get the cross to the top.

Messenger—Would you say this is the hardest thing you have ever set out to do?

Moore—By a thousand times, yes. It was a challenge mentally, physically and spiritually. When you are climbing a mountain, every step you are pulling your weight up with the cross on it. I had a team of 13 other people who went with me to help me carry the cross and it took us two days to learn how to carry the cross. By the third day we were in sync and got into a rhythm of carrying the cross.

Messenger—With your team helping you, how did that help you focus your heart on Jesus and what He accomplished with the cross, the incredible burden He bore?

Moore—I have never been so emotional in my life. As I carried the cross, the things we went through were so minute compared to what Christ did for us. As hard as it was, and even at its most difficult moments, one included scaling a 1,000-foot wall that took five hours, it was the most difficult thing in my life. I learned a lot about the cross.

Messenger—Amen. Your Oklahoma Baptist Messenger family was lifting you up in prayer the whole time. Did those prayers carry you to any effect?

Moore—Yes, everybody on the team felt every prayer that went up. We talked about that a lot. We didn’t think we could make it another step. When you’ve been walking for 18 hours nonstop, and you’re walking up a steep incline and you’re leaning forward and your muscles are yelling, but you keep taking one more step, one more step. We literally climbed Mt. Kilimanjaro inch-by-inch.

Messenger—Walker, you had a team with you, and God was obviously with you in this historical record achievement, but you also had a special family member with you, your son.

Moore—Yes, my oldest son Jeremiah climbed with me. I led the cross to the summit and he held the back of it because it took two people. There is no explanation to how you feel on that; there are no words to describe it.

Messenger—Now you come back to the States and to your ministry. How has this changed your life and your perspective for eternity?

Moore—There were a lot of things that happened to me on this trip. On the third day, two of our team members were struggling with the altitude, and they were walking a little slower. So I stayed beside them and encouraged them on and helped them. I looked up and I saw the cross coming over the edge of a hill, and it was way ahead of me. I said, “Oh, there goes my cross! It’s way ahead of me.” And the Lord spoke to me and He told me that it’s not your cross, it’s the next generation’s. He told me to let go and let the next generation carry it. From that second on, it was no longer my cross or about Walker Moore going to the top of the mountain. It was about me letting go of the ministry and the cross, and letting the next generation run with it.

I was surprised by the emotional aspect of it all. It was so emotional for me, and I’m not that kind of guy, I joke around and laugh a lot.

Messenger—Congratulations! It is the achievement of a lifetime. Only God could have done this through you and your team members. We take our hats off and praise God for it.