MKs prepare for college during re-entry retreat at Falls Creek 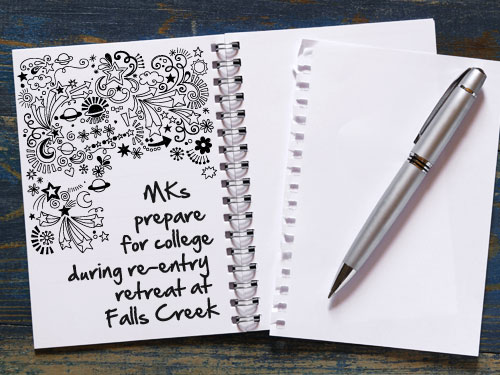 DAVIS—Some 75 members of an unusual “family” gathered for a reunion of sorts Aug. 6-9 at Falls Creek Baptist Conference Center, although most of them had never met one another.

Missionary kids (MKs) returning to the United States to attend college gathered at this camp in the Arbuckle Mountains—most of them wide-eyed and nervous at first; a few anxious to renew acquaintances with old friends—to attend the MK Re-Entry Retreat.

The annual event is organized by the International Mission Board (IMB) and hosted on a rotating basis by state Baptist conventions and their Woman’s Missionary Unions (WMU). It was funded this year by a $5,000 grant from the national WMU organization and $10,000 from the Edna McMillan Oklahoma State Missions Offering.

Linda Whitworth, associate director of stateside training at the IMB Learning Center in Richmond, Va., has coordinated the retreats for the past 13 years.

“We try to prepare the MKs for reverse culture shock for American life, and how customs are different here than what they have grown up with,” Whitworth said.

“We also try to re-emphasize God’s faithfulness and His love for them and how He is going to provide for them. Many of them are going to be separated from their families and it’s much like a normal college transition, but (it’s) combined with families very far away and them coming from a different world view and culture.”

While the MKs will be almost indistinguishable from other college students, they are a breed apart, Whitworth explained.

“Here, they look the part; they look like normal American kids, and, yet, they’re so different,” she said.

“So, we bring them to a safe place where they can interact with older MKs who have successfully done it, are strong in their faith and are active in their church and ministry and they are able to ask them questions and interact with them. Then, after this is over,  our small group leaders serve as a support system for them during their college year. They can call them at any time for assistance.”

One student familiar with the program is “Nate,” who came to Falls Creek as a team leader after going through the retreat a year ago. He led a group of 10 MKs.

“It’s  a way for them to bond and get to know each other. We have time during the few days we have here together to just talk and learn together,” he said.

Also, activities help the MKs, who mostly came from Asia, Africa, Europe the Middle East and South America, form bonds. Included were a scavenger hunt called the Amazing Race, which led the eight teams all over the Falls Creek campus, a dodgeball tournament, a boat building competition and an Oklahoma-style party complete with barbecue and mechanical bull rides, courtesy of Ardmore, Rawhide Cowboy Church.

“There’s a phrase we use—third culture kids,” Nate said. “What it means is your parents are from one culture and you grew up in another culture, so a lot of these kids develop a third culture within themselves, which is a combination of that.

“It’s a culture nobody else has because it’s unique to you. So, this (retreat) is one of the few places where you fit in with other people who have that third culture, too. That’s a big deal for an MK, because on the outside, they seem to really fit in well. On the outside, most of them look to be American, but on the inside, they don’t really fit in here.

“There are some kids born over there, and some who moved there when they were 15, so there’s a big range of experiences.”

“I actually went through it last year, and it was the highlight of my summer. I didn’t expect it to be. I expected it to be like an over-hyped therapy session, and for any teenager, that doesn’t sound like a lot of fun. But it’s probably the only place in the world where I fit in immediately, and that’s a pretty amazing experience.”

“Martin,” from Central Asia, agreed the week had been really beneficial.

“I am a little different from a lot of the other kids here because I spent my senior year in the States, and one of the biggest reasons I wanted to come here was to see a lot of the friends I had made in the 11 years I spent overseas,” he said.

“It’s kind of like the MK reality; they’re the only people you truly feel totally accepted by. And just being able to come back and spend time with them and make that connection has been special. I have also been able to make new friends and build relationships with them, too.

“Jessi” is returning from Guatemala to attend Oklahoma Baptist University as a music education major. A native of Spain, she was anxious to renew friendships here.

“There were some old friends I knew were going to be here, so just meeting them again and getting to know them better now that we’re older was something I was looking forward to,” she said. “And connecting with other MKs my age, too.”

She has been surprised, however.

She also is looking forward to the upcoming Bison football season. “I’m so excited. I love football, so that will be fun,” she beamed.

“Sarah” is another incoming OBU freshman.

“I didn’t have any expectations, but I always say, MKs, they’re family, no matter who they are or where they’re from, so I was looking forward to it. It has been fun,” she said.

“We did a lot more exercise that I thought we would do with the scavenger hunt. In the Oklahoma heat, that was something else! But, God has been working in my heart while I was here, too, so that’s something that’s always good.”

Sarah plans to have a double major at OBU—studio art and psychology pre-counseling.

“I want to be an art therapist and complete a master’s degree in art therapy,” she said.

Her experience at the retreat was amazing she said.

“I’m one of just a few people from Europe here, and I met two others who plan to be art therapists, too, which is really rare. I’ll look forward to see how they’re getting on with their studies, too,” she concluded.

“Falls Creek is a wonderful facility. This has just been so perfect; the kids have thoroughly enjoyed it,” Whitworth concluded. “The WMU and the churches, including Bethany, Council Road, Edmond, First and Sulphur, Calvary, which provided transportation, have been overwhelmingly gracious to them in providing a quality  experience.

“This is one last touch, showing appreciation to the MKs and their families for their service by how they have loved on them and launched them into their college careers. This has been an awesome time.

“The kids come here nervous and timid, and then they’re able to make friends.  I think it helps them as they head off to school because they think, ‘If I can do it here, I can do it at school, too.’”

“All of these items were given to the students as a way to start them off at college,” said Kelly King, BGCO women’s missions and ministries specialist, who helped coordinate the event. “Also, every MK received a $50 gift card to Wal-Mart to help purchase school supplies.”

Each MK was greeted with a stack of personalized gifts on their bed from their school when they arrived at the retreat. And, many groups wrote prayer cards that were given out to the MKs daily as an encouragement from Oklahoma Baptists.