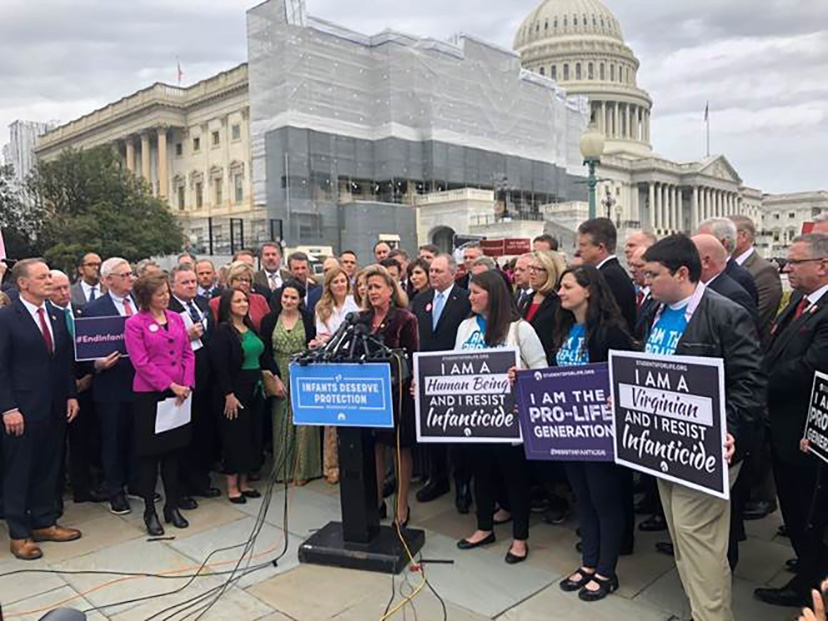 WASHINGTON—Republicans in the U.S. House of Representatives initiated an effort this month to gain a floor vote on legislation to require health care for a baby born alive during an abortion. 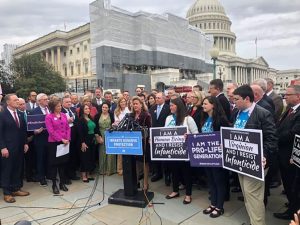 Rep. Ann Wagner, R-Mo., sponsor of the Born-Alive Abortion Survivors Protection Act, speaks April 2 at a Capitol Hill news conference before a discharge petition was filed the same day to bring her bill up for a vote in the U.S. House of Representatives. Photo from Rep. Ann Wagner on Twitter

Minority Whip Steve Scalise, R-La., filed a discharge petition for the Born-Alive Abortion Survivors Protection Act, H.R. 962, in an attempt to bring the bill to the floor over Democratic resistance. More than two dozen previous efforts using a different procedure have failed. Since Feb. 6, various GOP members have sought unanimous consent for consideration of such a proposal on 25 occasions, but the presiding officer from the Democratic majority has declined the request each time.

Success appears highly unlikely for the discharge effort. To succeed, a discharge petition requires a House majority—218 signatures—to bring the bill out of committee to the floor. Republicans have 197 members in the House, and no more than three Democrats typically vote for pro-life legislation.

Scalise acknowledged the difficulty in an April 2 news conference before filing the petition.

“Frankly, it should be easy to get all 435 members of Congress to sign this, but it’s not. In fact, it’s going to be hard,” he said. “We know it’s an uphill battle, but we don’t come here to do the easy things. We come here because it’s hard, and we’re here to do the most difficult and toughest things, and, most importantly, to stand up for the most vulnerable among us.”

As of April 16, Rep. Kendra Horn, OK-District 5, had not yet signed the petition.

Discharge petitions do not expire during the 116th Congress. Democratic opposition to the legislation in the House has made members of the party vulnerable to understandable charges of supporting infanticide. The bill not only says a child who survives an abortion or attempted abortion is a “legal person” deserving protection, but it mandates that a health care provider give the same degree of care offered “any other baby born alive at the same gestational age.”

Southern Baptist ethicist Russell Moore said, “The unwillingness of some elected officials to vote on whether it should be legal to leave a crying baby to die on the table is as morally reprehensible as it is politically shameful.

“A child’s intrinsic dignity is given by God not the circumstance of their birth,” Moore, president of the Ethics & Religious Liberty Commission, said in written comments. “Americans deserve to know where their elected officials stand on infanticide, and I am thankful that nearly 200 members of Congress signed the petition to bring the Born-Alive Act to the House floor for a vote.”

“Oklahoma Baptists are committed to protecting life—born and unborn. It is unconscionable that, in America, we would tolerate infanticide. To condone such as act is pure evil. I strongly encourage people of faith to rise up and insist their members of Congress pass this bill,” said Gideon, who is senior pastor of Edmond, First and is serving as president of the Baptist General Convention of Oklahoma.

For information about contacting members of the U.S. House of Representatives, visit https://www.house.gov.