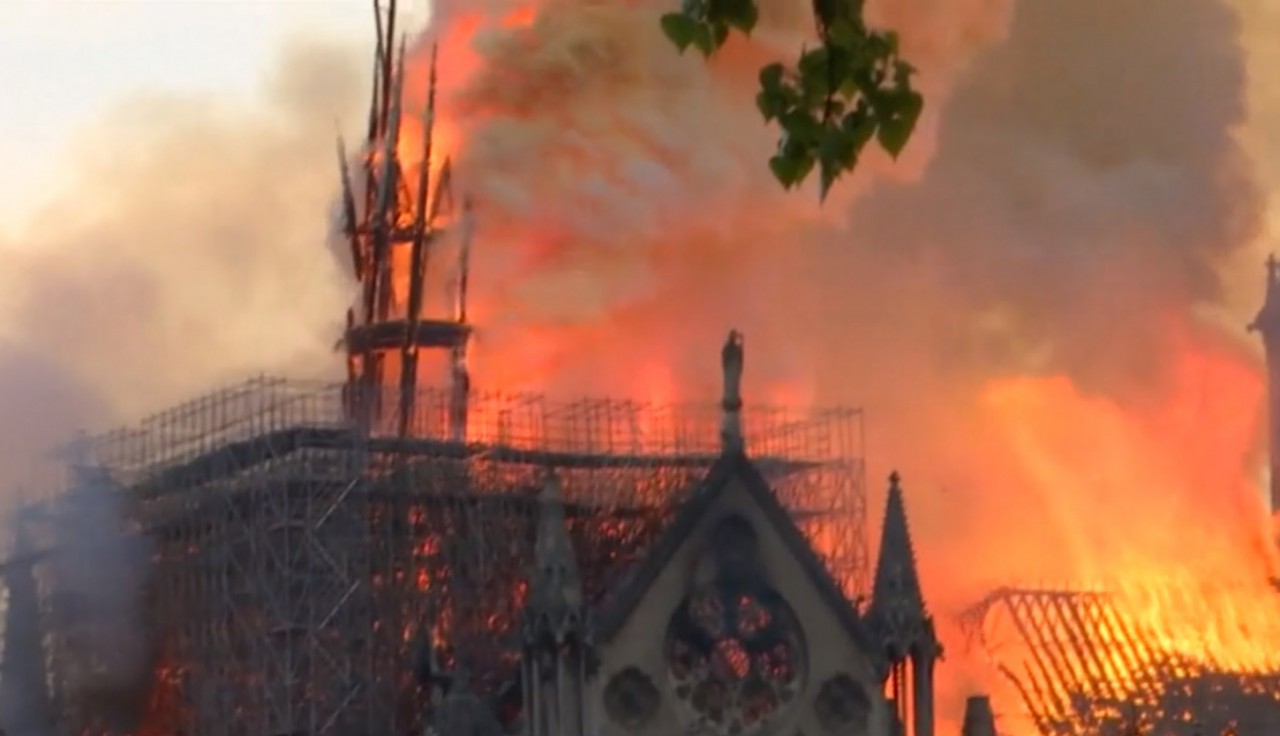 PARIS (BP) — A fire at Notre Dame Cathedral in Paris — lamented in media reports as the marring of a historic French symbol — has deep theological significance some observers may have missed, say evangelical scholars of culture and art.

“Notre Dame is the handiwork of those who self-identified as Christian, and it testifies to the essential Judeo-Christian heritage of Europe,” said Mark Coppenger, a Southern Baptist Theological Seminary philosophy professor who supervises doctoral students studying Christianity and the arts. 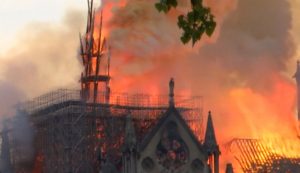 A fire at Notre Dame Cathedral in Paris April 15 destroyed the building’s spire and two-thirds of the roof.
Screen capture from CBS News

A fire was detected at the cathedral April 15 shortly before 7 p.m. local time, according to media reports. The blaze destroyed Notre Dame’s 295-foot spire and two-thirds of its roof before being extinguished today (April 16) by some 500 firefighters. The fire left three holes in the vaulted ceiling.

No one died in the blaze, but three first responders were injured, The New York Times reported. The fire’s cause has not been determined.

Parisians gathered spontaneously to sing hymns, pray and watch the fire burn, according to media reports. At least some works of art and Catholic relics were saved from the burning cathedral, including a crown of thorns some claim was the one placed on Jesus at His crucifixion.

Some 13 million people visit the cathedral annually, according to the Associated Press.

“Though we Baptists don’t share the sacramental theology of the Roman Catholic Church and are not practitioners of Marian devotion (regarding ‘Our Lady’ &#91;the English translation of ‘Notre Dame’&#93;) … Christians of every stamp, including evangelicals, have gained spiritual blessing from &#91;the cathedral’s&#93; magnificent interior,” Coppenger told Baptist Press in written comments.

Southern Seminary President R. Albert Mohler Jr. said “a rightful mourning … should come to evangelicals” following the fire even though Protestants do not embrace the Catholic “sacramentarianism that takes place in Notre Dame Cathedral.”

Built in the 12th and 13th centuries, Mohler said, the cathedral is shaped like a cross. Its cross-topped spire pointed upward to honor “the reigning Jesus Christ,” and its Gothic architecture symbolizes the “greatness” and “transcendence of God.”

“Parisians, watching with broken hearts the burning of the Notre Dame Cathedral, saw so much last night,” Mohler said today (April 16) on his podcast The Briefing. “But those who would think through the lens of Christian truth and biblical Christianity do not see less, but actually far more.”

Dan DeWitt, associate professor of applied theology and apologetics at Cedarville University, said “the burning of Notre Dame Cathedral in Paris is a reminder of the significance of symbols. All art is reflective of the worldview of both the artists and their audiences. This great Gothic cathedral has stood for centuries as the most iconic symbol of the city of Paris.”

The cathedral’s history, Mohler said, has mirrored the history of France’s shifting worldview.

During the French Revolution, when human reason was emphasized and the authority of Scripture downplayed, a statue of the Virgin Mary in the cathedral was replaced by one of the Goddess Reason. Later, the cathedral was rededicated to a generic Cult of the Supreme Being and became a warehouse for food when locals lost interest in the new religion, according to The Gospel Coalition website.

The cathedral eventually became a Catholic church once again, though it is owned by the French government.

Beyond its Christian — and sometimes explicitly Catholic — symbolism, Coppenger said, Notre Dame “is one of the greatest testimonies to the artistry and diligence of those made in the image of God.”

“The same could be said of the Moorish (Muslim) Alhambra Palace in Granada and the Angkor Wat (Hindu) complex in Cambodia,” Coppenger said. “Even when we very much disagree with the worldview lying behind the construction, we have to admire the human craftsmanship and aesthetic acumen that went into these projects and wish their continued presence.”

Donors have pledged at least $700 million to repair the cathedral, Fox News reported.

DeWitt, an artist who has taught on human creativity, said “it will be interesting to listen to the global conversations surrounding what is done in the aftermath of this cultural loss.”

“It is thought that a pagan temple once occupied the ground where Notre Dame is now located,” DeWitt said in written comments. “Throughout the history of the city, four other churches preceded Notre Dame at this address. Every new development is an expression of cultural values. What comes next — rebuilding, reconstruction or something else — will say a lot about the predominant cultural worldview, whether the art is a monument to man or God.”