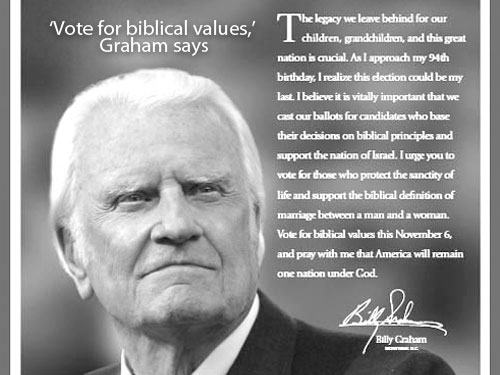 MONTREAT, N.C. (BP)—Billy Graham, in a national advertising campaign launched Oct. 18, calls on Americans to “vote for biblical values” as they cast ballots in the upcoming election.

A full-page ad in the Oct. 18 Wall Street Journal and Oct. 19 USA Today featured the legendary evangelist’s picture beside a block of text stating:

“The legacy we leave behind for our children, grandchildren and this great nation is crucial. As I approach my 94th birthday, I realize this election could be my last. I believe it is vitally important that we cast our ballots for candidates who base their decisions on biblical principles and support the nation of Israel.

“I urge you to vote for those who protect the sanctity of life and support the biblical definition of marriage between a man and a woman. Vote for biblical values this November 6, and pray with me that America will remain one nation under God.”

The Billy Graham Evangelistic Association (BGEA) said friends who support the ministry have contributed funds designated for the purchase of advertising space using Graham’s image to call for the support of candidates who support biblical values.

In addition to The Wall Street Journal and USA Today, the ads will appear in newspapers in as many as a dozen states over the next few weeks, according to a BGEA statement Oct. 18.

“The number of states, papers and times the ads run will depend on the amount of funding provided and designated for this project of the BGEA,” the association said. “The ads intentionally do not mention any candidate, political party or contest, urging instead for readers to cast votes for candidates—at all levels—based on their support for biblical values.”

The statement added that Graham “recently expressed a desire to publicly call America back to God and to prayer, and to draw attention to moral issues that are clearly addressed in the Bible and have increasingly become part of a national political dialog.”

Also Oct. 18, news reports spotlighted the recent removal of a reference to Mormonism as a cult from the website of the Billy Graham Evangelistic Association.

In a section of the website called Billy Graham’s “My Answer,” there had been the question, “What is a cult?” The answer was, “A cult is any group which teaches doctrines or beliefs that deviate from the biblical message of the Christian faith,” according to CNN.com.

“Some of these groups are Jehovah’s Witnesses, Mormons, the Unification Church, Unitarians, Spiritualists, Scientologists and others,” the answer continued.

The removal came after the New Civil Rights Movement, a homosexual advocacy group, reported that the cult reference remained online even after Graham met with Romney last week in his Montreat, N.C., home and “all but endorsed” the Republican for president, according to Religion News Service.

Ken Barun, chief of staff for the BGEA, confirmed to CNN Oct. 16 that the page had been removed from the website.

“Our primary focus at the (BGEA) has always been promoting the Gospel of Jesus Christ,” Barun said. “We removed the information from the website because we do not wish to participate in a theological debate about something that has become politicized during this campaign.”

The removal left people wondering whether Graham was softening his stance on Mormonism to support Romney, a Mormon, for president.

As part of the national advertising campaign, the BGEA is providing resources to help people spread the message. At billygraham.org, people can download and display one of two ads as well as share the page on Facebook and Twitter. Bulletin inserts also are available.

The ad, titled “Legacy,” is appearing in newspapers; a second ad, “Crossroads,” also is available for sharing.

“On Nov. 6,” the Crossroads ad says, “the day before my 94th birthday, our nation will hold one of the most critical elections in my lifetime. We are at a crossroads and there are profound moral issues at stake.

“I strongly urge you to vote for candidates who support the biblical definition of marriage between a man and woman, protect the sanctity of life, and defend our religious freedoms,” the ad says. “The Bible speaks clearly on these crucial issues. Please join me in praying for America, that we will turn our hearts back toward God.”

A. Larry Ross, a spokesperson for Graham, said the ads are consistent with the evangelist’s practice of remaining politically neutral.

“Against the backdrop of moral decline and a cultural shift in our nation that reflects timely issues, Mr. Graham’s quotation in the ad is an extension of his faithful preaching of a timeless message and strong stand on biblical values for more than six decades,” Ross said in a statement to Baptist Press.

Graham has been called America’s pastor and has prayed with every American president since Harry Truman.

Following his meeting with Romney Oct. 11, Graham issued a statement saying it was an honor to host the candidate in his home, “especially since I knew his late father, former Michigan Gov. George Romney, whom I considered a friend.”

Graham said he has observed Mitt Romney’s career in business and politics, and what impresses him more than his success “are his values and strong moral convictions.”