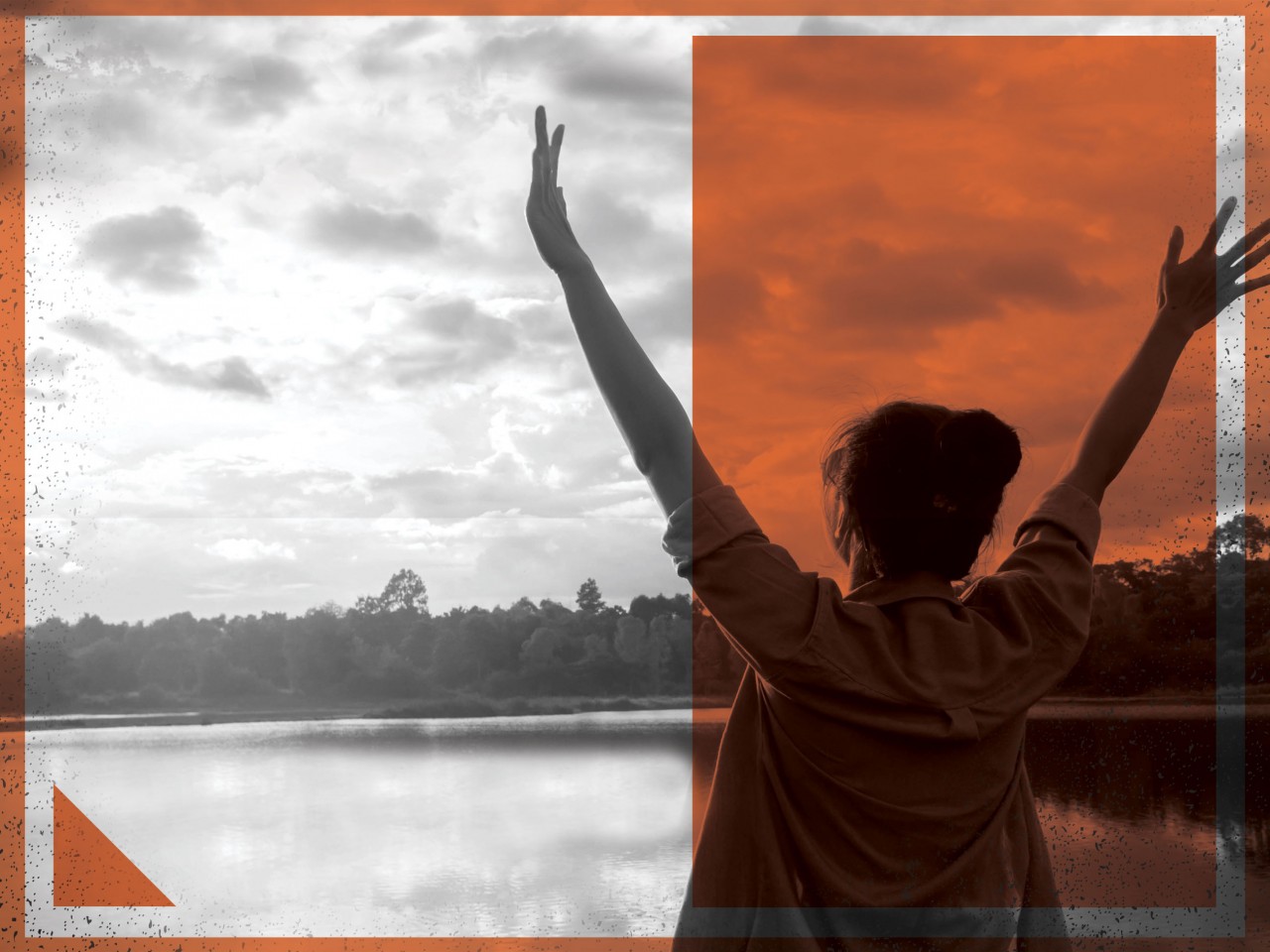 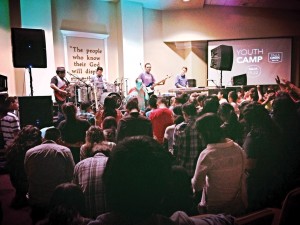 Worship in the Tabernacle chapel.

This was the fourth Family Camp since 2010, all led by Rigoberto Varela, pastor of Duncan, Primera Iglesia Bautista El Divino Salvador, at the request of Agrupacion Bautista Hispana de Oklahoma (ABHO). ABHO leadership chose “Strengthening Today’s Family” as the theme for Family Camp because, as Varela observed, people of all ages have been losing emphasis on what the family is.

Varela said he has seen many frustrated children and young people looking for things outside of God’s ways, and too many Christian couples getting divorced. He was thrilled to see marriage partners forgive each other at camp, and young people deciding to put God first in their lives. Several people told him at the end of the week, “Now we have a clear idea of what our family is.” 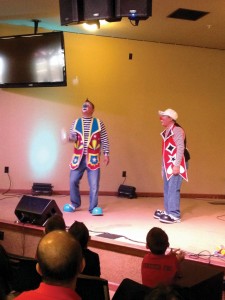 César Garcia, ABHO president, and pastor of Oklahoma City, Ríos de Agua Viva, explained that the camp theme has always been chosen to reflect the intent of helping families.

“The contemporary family is facing cultural challenges, first generation (immigrant) parents with second generation children.  With all that, parents tend to give up too quickly on maintaining certain cultural values that are supported by biblical values,” Garcia said.

Among those helping to convey God’s Word to families were evangelist Sammy Fuentes of Corpus Christi, Texas; Ludwig Villamizar of Tampa, Fla.; worship leader Evan Craft of Los Angeles; Mexican mariachi singer Erik Roberto Torres of Dallas; Northern Mexican style music group “Unción Divina” (Divine Anointing) from Tyler, Texas and Ministerio Infantil Shalom (Shalom Children’s Ministry) clowns Ponchito and Pancho Pancho who, along with the son of one of them, also a clown, taught biblical truths to the children while their parents were in evening worship and conferences.

Oklahoma City pastors José Cifuentes, Nueva Vida, and Juan Luna, Emanuel, led morning devotions on the family theme. Jesús Pacheco, Hispanic evangelism strategist for the Baptist General Convention of Oklahoma (BGCO), led a workshop on ReConnect Sunday School.  He and BGCO Hispanic Ministries Specialist Daniel Cáceres estimated there might be 800 Hispanic Baptist Sunday School classes in Oklahoma. Pacheco declared, “We need to use this structure for everyone to be a part of God’s plan for extending His Kingdom on Earth. When we talk about connecting, we’re talking about relationships. Every (Hispanic) Sunday School member knows unbelieving relatives, co-workers, or neighbors. The idea is to use the whole army to connect people to Jesus.” 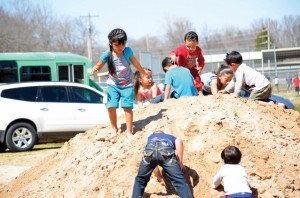 while older youths played organized sports, young children had just as much fun playing on a pile of dirt.

Speaking on Josh. 24:15-16, Fuentes testified that he has seen many families follow when a Christian leading the family declares, “This family will serve the Lord.”  He seeks to help not only his wife and children, but also his in-laws, children’s in-laws, etc. serve the Lord.

Fuentes also urged couples to speak to each other in the Spirit.

Varela asks that Baptist Messenger readers pray for even higher attendance for Hispanic Family Camp at Falls Creek during spring break 2015, so more people can improve their family relationships as marriage partners, parents, and children. He appreciated BGCO Executive Director-Treasurer Anthony Jordan’s visit to encourage campers to continue moving forward, and the assistance of Falls Creek staff with many details.

For the first time, this year the Hispanic Family Camp was not held on different dates from Youth Camp. This enabled parents and pastors to better observe the results among youth at camp, particularly as they heard testimonies from young people during the final worship service of the week, which was led by youth and their camp leaders. 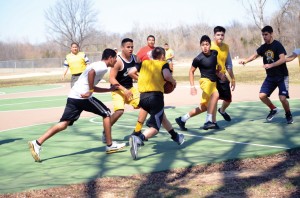 In many countries, the term youth refers to single adults age 18 to about 35. Alejo Benito, pastor of Durant, Primera Iglesia Bautista and Atoka Hispanic Mission, first led a youth camp for 25 young people nine years ago, for his own church and a small number of nearby churches. He has led the camp ever since, and seen it grow into a regional and now statewide event affiliated with ABHO.

This year, Benito directed the programming for youth during family camp, which involved about about 140 people in eight small groups within two larger divisions, students age 13-17, and young adults age 18-25. Activities included the ropes course, “Minute to Win It” challenges, crafts, worship through music, and a bonfire. All activities were bilingual (Spanish and English), and were designed to get young Christians to invite non-Christians, and to help them all develop an honest relationship with Christ.

Villamizar, the main speaker for youth, challenged campers to live an exemplary Christian life in front of non-Christians, and not allow themselves to be discipled by the world into its ways. 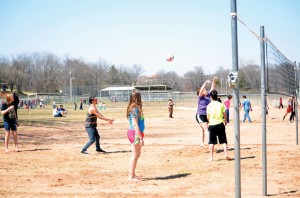 During the final camp service, Villamizar challenged youth and adults with a summary of the book of Acts:  Everyday people with extraordinary power preaching, praying, giving, and suffering, so the Gospel would be made known and extended.  He pointed out that Stephen’s stoning led to the expansion of the church because “God heals and uses the testimony of a broken person. . . . This is better than Hollywood. . . . God is in control. See the situation in your family?  Don’t lose hope.  Keep your eyes on Jesus . . . . because God has a plan. We need to trust in His plan. We need to trust in Him.  It’s in this suffering that we focus on Him and people can see Who is in us. . . . We get tired of falling, but we must never get tired of getting up.”

With this being the first year Hispanic Family Camp has been held the same dates as Hispanic Youth Camp, García compared the 2014 camp to a launching pad, and to hinges on a door that is now open for a future where there is a more positive attitude about Hispanic Baptist work in Oklahoma, a stronger orientation to the sense of purpose. He looks forward to higher attendance for future camps, as young people attract their parents to attend, and parents attract more young people, so they can share the week as a family. 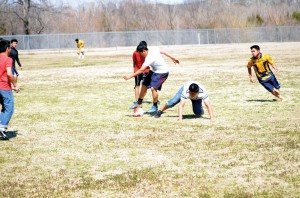 Jordan told the adults at Family Camp: “I told the young people I want them to look in the big room (in the Tabernacle). I told them, ‘This is your house,’ and I long for the day when they have to move to the big room. I want you to have eyes of faith to see that. It will be a great joy someday when the Hispanic camp will not fit in another facility, and you’ll have to use the Tabernacle.”

Jordan explained the construction going on at Falls Creek, and predicted that in 2016, Hispanic Family Camp would need to use the new Mathena Family Events Center, where 2,000 people can sit down to eat, because the Ada, First cabin will no longer be big enough to house the growing group.

Jordan held up a copy of the third issue of the Mensajero Bautista (Hispanic version of the Baptist Messenger).

The third issue of the Mensajero Bautista was distributed during Family Camp. Those in attendance took more copies back for people in their churches who did not attend camp.

García’s dream for Hispanic Family Camp during spring break 2015 is that the Lord will call many young people as church planters, pastors, seminary professors, and missionaries in other parts of the world.

“We want to sow in the hearts of the parents to encourage that. . . . We want to put a missionary heart in the parents and youth and even in the children,” he concluded. “Camp is ours, of the people, for the people, a tool of God, not just for us to enjoy a few days, but to find God’s purpose for Hispanic Baptist work in Oklahoma and for the family, to serve the Lord.”