“I was in shock and awe,” Kitchens said, recalling when he learned the news. “I was humbled and honored.” 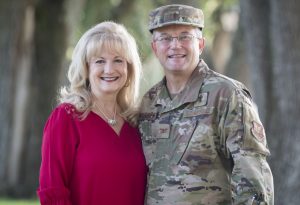 Since July 2017, Kitchens has served as the Command Chaplain for the Air Force Global Strike Command at Barksdale Air Force Base (AFB) in Louisiana, one of 16 assignments in a chaplaincy career that dates to April 1987.

In his role, Kitchens will also be a part of the Armed Forces Chaplain board that advises the U.S. Secretary of Defense and the Joint Chiefs of Staff on matters related to religious, ethical and quality-of-life issues.

Kitchens succeeds Brig. Gen. Ronald M. Harvell for the post after Harvell, also a Southern Baptist, was named to the faculty and staff of Charleston Southern University, where he will serve as the university’s first director of the Dewey Center for Chaplaincy.

“Chaplain Kitchens’ Senate confirmation for promotion to brigadier general and selection as the US Air Force’s 27th Deputy Chief of Chaplains is truly historic,” said Maj. Gen. Doug Carver, executive director of chaplaincy for the North American Mission Board. “This is the first time in the Air Force chaplaincy’s 52-year history that Southern Baptist chaplains have been chosen in succession to fill this strategic ministry position. It is also indicative of the exceptionally gifted chaplains who represent Southern Baptists in taking the hope of the Gospel to the members of the Armed Services.”

Kitchens shared several stories from his time serving as a chaplain all over the world that revealed the heart and ministry of a chaplain.

While assigned to Kunsan AFB in the Republic of Korea, Kitchens invited an airman into his office. The young man and Kitchens had been interacting for several weeks.

So, Kitchens walked the airman to the emergency area where, after they checked him out physically and mentally, the staff discovered that the young man had been experiencing suicidal ideation.

Unbeknownst to Kitchens at the time, the airman had already mailed letters to his family to let them know that they would not be seeing him again. Only later did Kitchens learn that as the airman was transferred to another hospital, he told a commanding officer to thank the chaplain because he saved his life.

“That was an impactful experience for me personally, and it’s because it’s not in me, in myself, but the Lord used me and gave the skillset to be able to be sensitive in those situations,” Kitchens said. “So, my reminder is every person I come into contact with has a story. I should not rush by general conversation without recognizing whether or not the person is transmitting a deeper message.”

Kitchens, born and raised in Macon, Ga., grew up as the son of a bivocational pastor. He made a profession of faith as a young boy and followed in believer’s baptism.

“At a young age, I knew that God had a calling on my life,” Kitchens said. He finished his undergraduate work at Mercer University in Macon, majoring in Christianity and minoring in physical education as well as music and voice.

Kitchens eventually accepted a call as pastor of Key West, Fla., Big Coppitt, and it was there that God revealed a new calling for him and his wife Sherri.

“We began to meet many Navy couples during that time,” Kitchens said. “The ministry we had with them really jumpstarted our heart and desire for ministry to the military. We saw so many young couples who were hungry for the Word of God, for good Christian fellowship and for learning and growing with one another. So, God placed that calling on my life and in my heart.”

From there, he began taking classes at Southern Seminary in Louisville, Ky., and he became a chaplain candidate. Now, his 17th assignment with the Air Force brings him to the Pentagon in Washington, D.C.