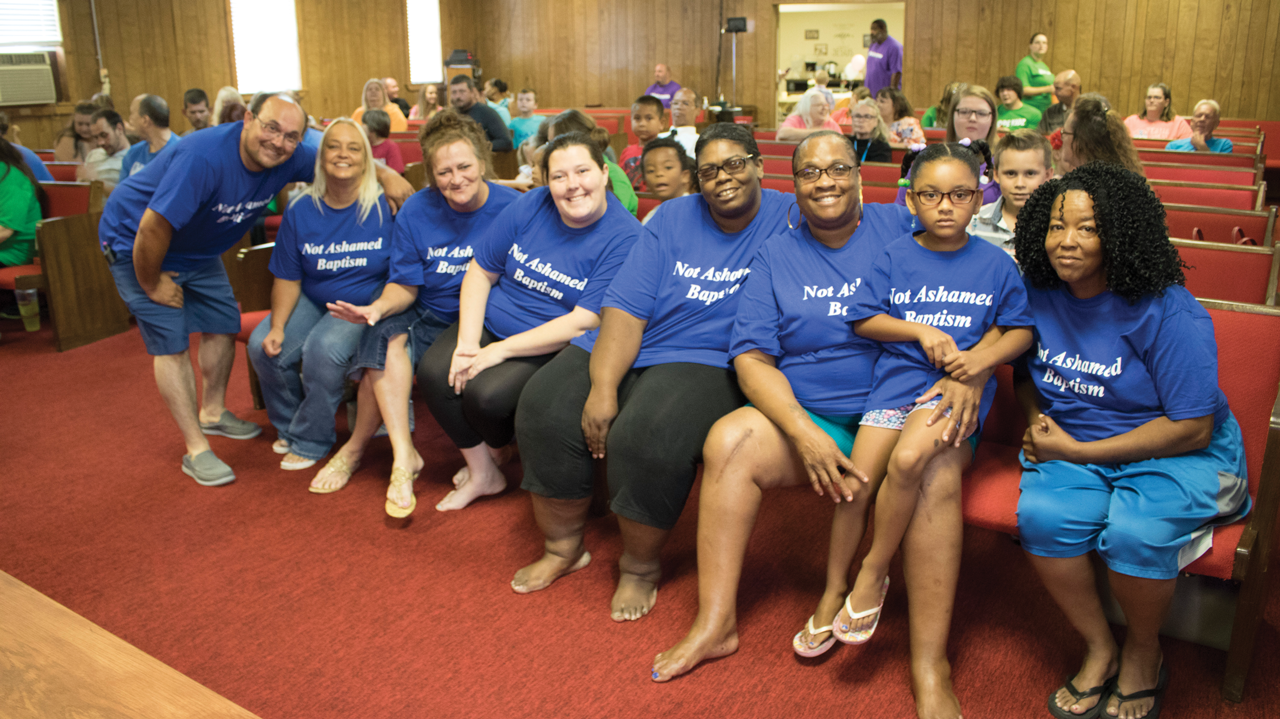 TULSA—A church that started with no home now offers a home and hope to people of all backgrounds, economic statuses and life situations.

Tulsa, Hope Church is just off of 49th street in Tulsa, not far from downtown, where the pastor at Hope, Earl Krumsiek, first started worshiping with the homeless people of Tulsa.

“We always say here at Hope, we love people where they are, we don’t leave them where they are,” said Krumsiek. The beginning of what would one day be Hope happened in 2004, when 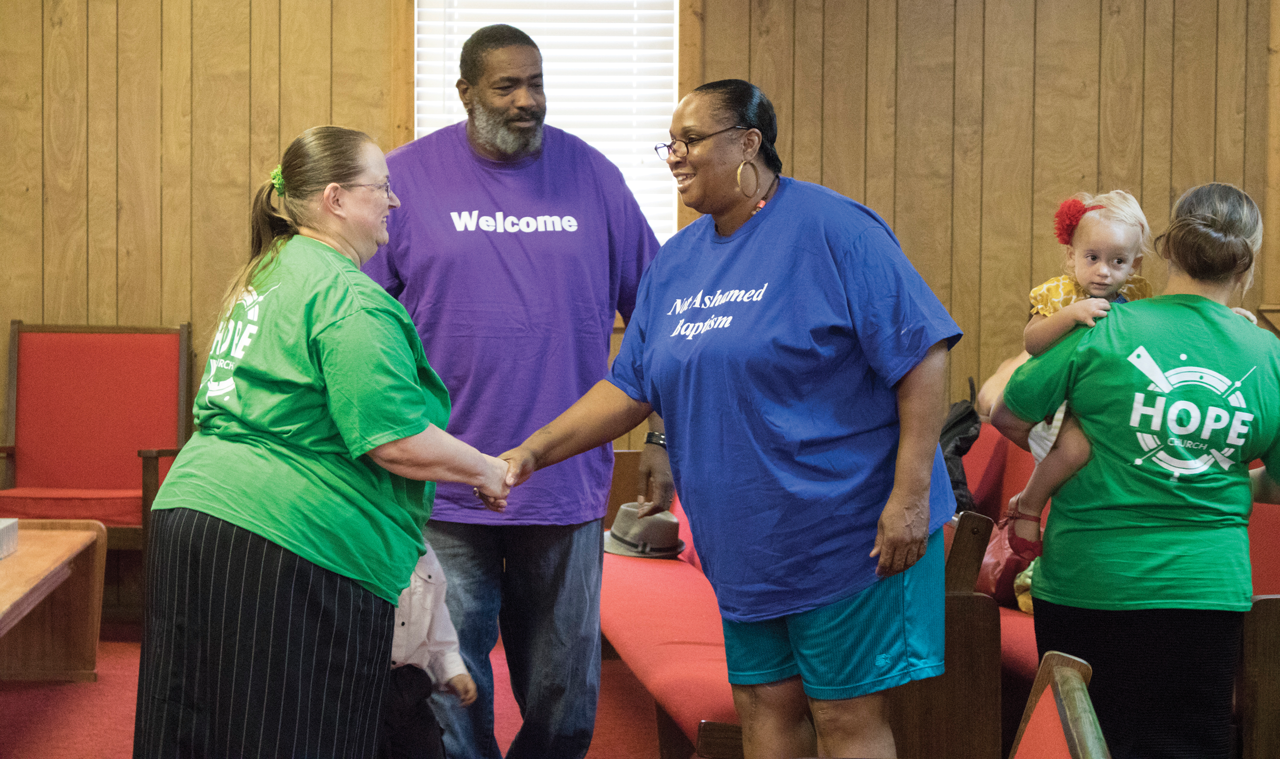 Members greet each other during welcome time on a Sunday morning at Hope Church.

Krumsiek was asked to preach at a street ministry on the curb outside of the homeless shelter in downtown Tulsa.

After that day, for three years Krumsiek returned to that same corner to share the Gospel with homeless people and anyone who would listen. He played music, preached a sermon and even had an altar call, but eventually the man funding the ministry withdrew his support, bringing the homeless church ministry to a halt.

Shortly after, the Lord opened another door that led Krumsiek to a ministry that bussed the homeless to different churches, where they would be presented the Gospel.

“We would have our normal street service, then we would bus them to the church afterwards, and we did that for about 13 years,” said Krumsiek. “We were a church with no home. I never accepted the title ‘pastor.’ I’m not a pastor, but finally so many people said ‘You’re my pastor,’ so that’s how I became a pastor.”

Eventually, a church provided its fellowship hall in which Krumsiek’s congregation could meet, but their services kept getting cancelled due to church functions. This is when Rusty Gunn of Sand Springs, Church that Matters, became an integral part of what is now Hope Church. Through a series of connections, Gunn and Krumsiek met, and Krumsiek was offered a building owned by Church that Matters.

“So many things that we needed to start our church just kept falling into our lap,” Krumsiek said. “We needed a building, and we (were) offered one. We needed insurance, and the Lord provided again. The same (happened) with things like a refrigerator and a microwave. I literally had people call me out of the blue asking if I needed these things.”

Krumsiek and Hope Church got connected with the church planting group of the Baptist General Convention of Oklahoma (BGCO), which provided valuable relationships that helped the church grow. Krumsiek started taking classes at the Haskins School of Christian Ministry (HSCM), equipping him with church plant information to help Hope Church grow.

Jimmy Kinnaird, BGCO church planting specialist said, “Many people don’t know this, but when a person plants a church with the BGCO, they not only get helpful assessment to direct them in ministry enhancement, but they also get training for planting and growing a new church and they get a trained coach.” Gunn is Krumsiek’s coach in this aspect.

During this time of growth and learning, Hope Church had its Sunday church service at 2 p.m. On July 2, Hope Church launched its 10:30 a.m. service and have seen tremendous growth.

“God has really blessed us,” Krumsiek said. “We run about 30 kids each Sunday and had our highest attendance today of 72, and we have started a membership program where we receive commitments from people and then get them plugged into ministry.”

Some of the members of Hope have been with the church from the beginning when Krumsiek was on the corner preaching. Steve was homeless when Krumsiek first met him and was involved in a gang, struggling with alcohol abuse. At a low point when Steve’s health was failing, he prayed that the Lord would deliver him, and he says the taste of drugs and alcohol were removed from his mouth. He was healed.

Another who serves fervently at Hope as Krumsiek’s “right hand man” is Arnold, a former severe alcohol abuser. But one Sunday he came forward at the altar call and laid his struggles before the Lord. He entered a rehab program with help from Krumsiek and was delivered from his addictions.

Another woman was visited by Krumsiek through the church’s door-to-door evangelism ministry in its new neighborhood. Members visited her one Sunday, and didn’t see her the next, fearing their visit may have been in vain. The following Sunday, she was at Hope Church.

Through this rapid growth Hope Church has experienced, people are making professions of faith in Christ. On June 30, Hope Church observed a baptism Sunday event where seven paticipated in believer’s baptism.

Before each baptism, each person shared their testimony about how the Lord had changed their life, and ultimately how Hope Church had a hand in their salvation stories.

One woman said, “I lived a life full of drugs and alcohol, and I got tired of living for the devil. The Lord has given me mercy and grace.”

Another woman was in the intensive care unit six months prior to the day she got baptized and said, “God threw me for a loop, and now He’s taken my shyness and given me a boldness, and I think Him for that.”

The woman who Krumsiek visited before Easter Sunday during door-to-door evangelism followed her profession of faith with believer’s baptism.

The Lord has heard the prayers of Krumsiek and his wife. They wanted to reach the lost, the homeless and the hopeless to share with them the grace and peace that comes with a relationship with the Savior.

“I was very legalistic,” Krumsiek said about how he was raised. “If you didn’t think like me you were going to hell, but these people have opened my eyes to see that God is bigger than me.”

With eyes opened and a passion for seeing the lost become found, Krumsiek and all those at Hope Church continue to grow and offer hope to the hopeless.

“Christ is real, the struggle is real,” Krumsiek said. “At Hope we don’t ‘church it up,’ because (if) you put lipstick on a pig, it’s still a pig. Jesus understands the struggle, but He gave us life, more abundantly, and though you fall and make mistakes, Jesus loves you.”