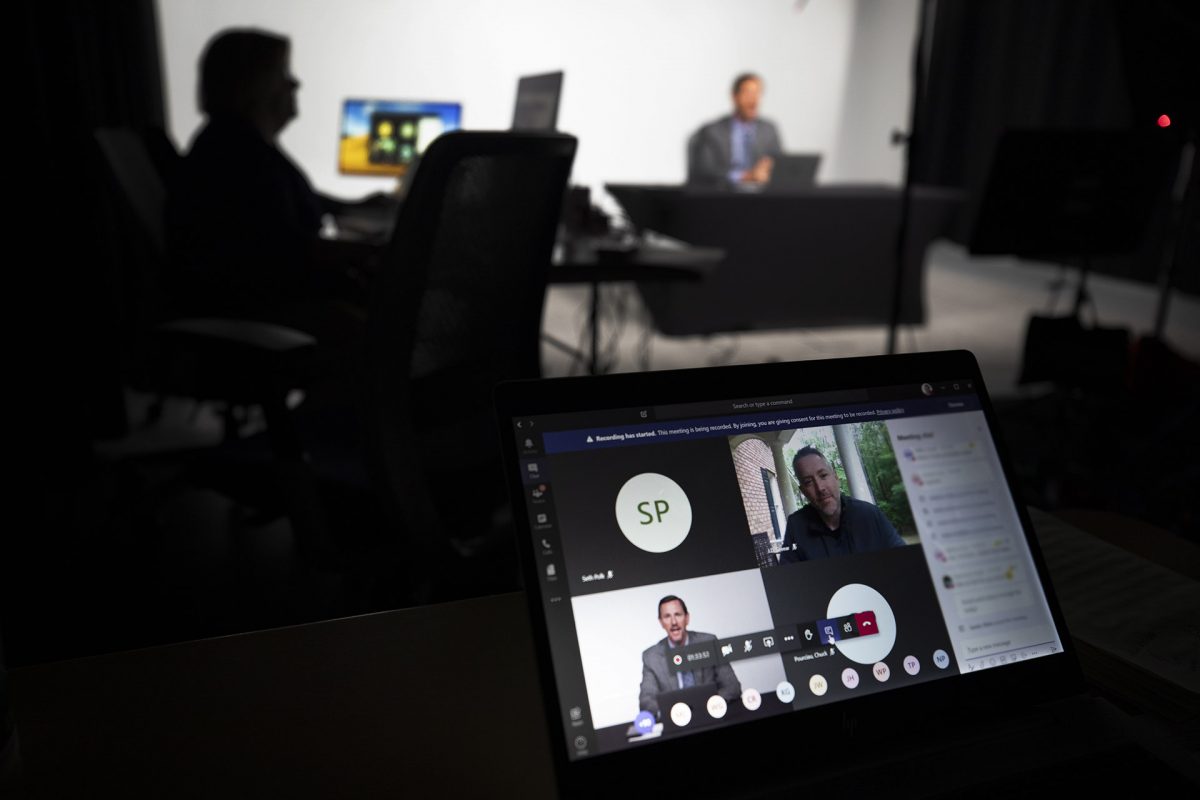 RICHMOND, Va. (BP)—During a virtual meeting May 13-14, trustees of the International Mission Board (IMB) approved the appointment of 59 new missionaries and received an update on the impact of the COVID-19 global pandemic, which has contributed directly to a shortfall of about $4 million in the IMB’s budget and necessitated spending cuts and a hiring freeze.

Trustees also elected Christy Roberson as vice president of human resources and Price Jett, vice president of finance, logistics and technology, as IMB treasurer. As a result of the pandemic and the subsequent cancellation of the 2020 SBC Annual Meeting, they re-elected 2019-2020 trustee officers to serve an additional year.

In a statement, IMB Paul Chitwood noted that increased giving through the Cooperative Program and the Lottie Moon Christmas Offering had the IMB strongly positioned when the pandemic began, but said the impact on local churches (and from there the IMB) “is quickly becoming evident.” Chitwood said revenue for March and April was $2 million below budget. Meanwhile, the IMB has incurred approximately $2 million in unbudgeted expenses while “evacuating and relocating IMB personnel” because of the pandemic.

“That … includes getting our missionaries back to the field, or, in some cases, getting them established in new places,” Chitwood said in the statement. “Some of our missionaries were required to leave everything behind and will need to start life anew in another harvest field.”

Chitwood said along with spending cuts, the hiring freeze was instituted “for most stateside staff positions.” Regardless of the pandemic, Chitwood assured trustees the work of IMB missionaries — “eternally essential workers,” he called them — continues.

And significantly, 59 more will soon be in the field.

The new missionaries will serve within each of IMB’s nine global affinities, which include the Americas, Central Asia, Deaf, East Asia, Europe, Northern Africa and the Middle East, South Asia, Southeast Asia and Sub-Saharan Africa.

The group of 59, along with two other missionaries who were appointed in January, will be commissioned in a first-ever virtual Sending Celebration June 9 at 6 p.m. (CST). The celebration will premiere live on IMB’s Facebook page and will also broadcast on IMB’s Vimeo channel and Twitter feed.

The Great Commission has not changed

J.D. Greear, president of the Southern Baptist Convention, thanked the trustees for their service during the unprecedented season resulting from the global pandemic. Greear reminded trustees that regardless of circumstances, God’s intention is for the Gospel to advance.

“God’s mission is always forward,” Greear said. “Times of uncertainty throughout history have been good for the church. During these moments, God multiplied the Great Commission for His purposes.”

Greear said the pandemic allows the church to “lean in” and expect great things from God. It also gives Christians the opportunity to share the hope they have in Christ as they move forward in reaching out to those who are suffering.

Highlights of IMB missionaries’ work despite the pandemic include:

—994 missionary candidates are working toward appointment, up from 656 one year ago. Although some missionaries returned to the U.S. as a result of the global pandemic, the overwhelming majority of IMB personnel remain at their posts overseas, and those in the U.S. are looking forward to returning to their field of service as soon as possible.

—This past year, IMB personnel and national believers with whom they work shared the Gospel more than 500,000 times. In response, 89,325 people expressed repentance and faith in Jesus Christ. More than half of those—47,929 people—were baptized, and 12,368 churches were planted.

—Send Relief, a unique partnership with the North American Mission Board, launched in February and is designed to help Southern Baptists be involved in human needs ministries at home and abroad through their respective entities. Send Relief is already undertaking COVID-19 relief projects overseas. Through IMB missionaries, Send Relief is funding 237 projects in 53 countries. More than 350,000 people in 400 communities are receiving food and/or hygiene assistance. Personal protective and medical equipment have also been distributed to hospitals and clinics.

In the statement, Chitwood said the IMB remains “in a solid financial position, but we will need help staying there.” He asked Southern Baptists to continue giving and to prayerfully consider additional giving through the Lottie Moon Christmas Offering—as well as to pray for missionaries and for more Gospel opportunities during the pandemic.

“IMB missionaries are eternally essential workers,” Chitwood said, “and their witness is needed more in the midst of this pandemic than ever before. Our continued work relies on Southern Baptists rallying together now through giving and praying.”

Chitwood noted that with a global population of more than 7.6 billion people, the number who die daily without Christ continues to increase.

“That number today stands at 154,937,” Chitwood told the trustees. “Today. And tomorrow, another 154,937 people will die apart from Christ. We thank God for what He, through Southern Baptists and their IMB, has done. But so much remains undone. We cannot, we must not, waver in our determination nor slow in our efforts to share the Gospel among all the peoples of the world.”

Chitwood added: “What does the immediate future hold? I do not know. But I do know this: The King has called upon us to go and make disciples of all nations, to be His witnesses, not just close by, but to the very ends of the earth. His commission has not changed. His mandate has not been rescinded. And we remain committed.”

The three essentials of mission work

In his address to the board of trustees, IMB chair Seth Polk reminded trustees of the great privilege they have to serve Southern Baptists and IMB missionaries, especially during the global pandemic. He expressed gratitude for Chitwood’s “steady leadership” and for the essential service of the more than 3,600 missionaries “who are committed to reaching the nations for Jesus.” Polk also thanked God for continued provision to send and support these missionaries through the “faithful giving and prayers of His people.”

Recounting Southern Baptists’ 175-year history of mission support and involvement, Polk focused on three essentials of effective mission work: reliance on Scripture, the Gospel above all and making disciples. Throughout the IMB’s 175-year history, Polk said, these essentials have been and will continue to be accomplished “in dependence on our sovereign God” and through the prayers and support of God’s people.

Polk also encouraged trustees and all Southern Baptists to join IMB’s “175 days of prayer.” The emphasis, which began May 11, will culminate with Southern Baptists’ annual Week of Prayer for International Missions Nov. 29-Dec. 6. IMB is enlisting prayer advocates who will commit to pray for specific IMB requests. Each day features one request sent as a push notification from the IMB Pray app; accessed at imb.org/175/pray; through the Pray Daily newsletter; or seen through IMB’s social media channels.

“In a time of pandemic, we turn our hearts to praise and petition,” Polk said, adding: “The measure of our faithfulness in the future, as redeemed people and as Southern Baptists, will correlate directly with our dependence on the Scripture as the Word of God, our fervor for sharing the Gospel and our commitment to make disciples of all the nations for the glory of God.”

She also worked nearly 18 years with Capital One Financial in progressive leadership roles. In 2016, Roberson was a B.I.G. (Business Impact at Goodwill) award recipient, and she is a three-time recipient of the Capital One President’s Award for outstanding leadership. Roberson is a credentialed Senior Professional in Human Resources (SPHR) and an accredited Senior Certified Professional through the Society of Human Resource Management (SHRM-SCP). She and her husband Clyde have two grown children, Alex (27) and Laura (23).

Trustees voted to elect Jett, IMB’s vice president of finance, logistics and technology, as IMB treasurer. Using an electronic ballot, trustees also voted to re-elect officers from 2019-20. No new nominations were submitted, and there were no nominations from the floor.

With the cancellation of the 2020 SBC annual meeting, expiring terms of convention entity trustees depend on each entity’s individual charter. As a result, the expiring terms of Seth Polk, chair, and Cheryl Wright, recording secretary, were extended one year, which made them eligible to continue to serve as officers of the board. The expiring terms of Bobbi Ashford (North Carolina), Susan Bryant (Kentucky), Ken Burnham (Alabama), Will Payne (New York) and Cindy Snead (Arizona) were also extended for one year.

The next IMB trustee meeting is scheduled for Sept. 29-30 in Richmond, with a missionary Sending Celebration Sept. 30 at 5:30 p.m. (CST) at Mount Vernon Baptist Church in Glen Allen, Va.